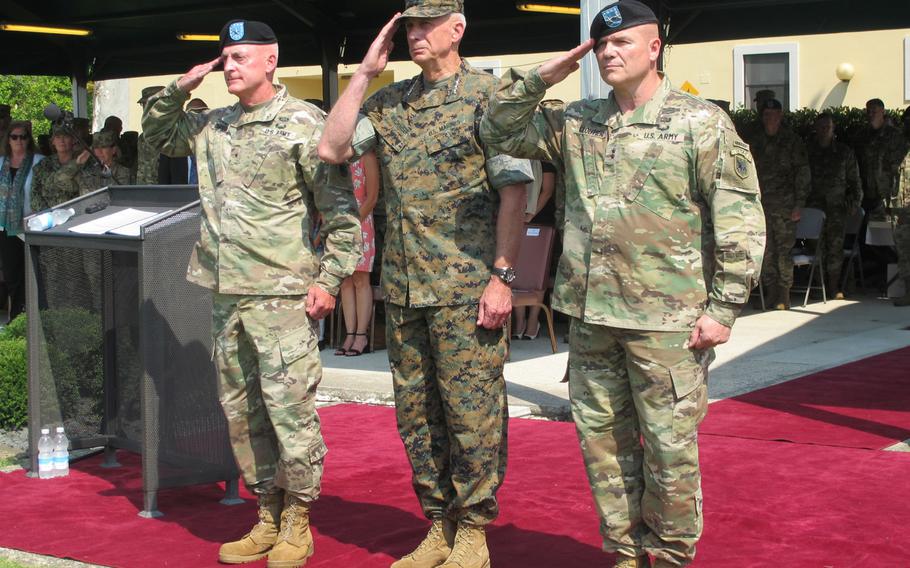 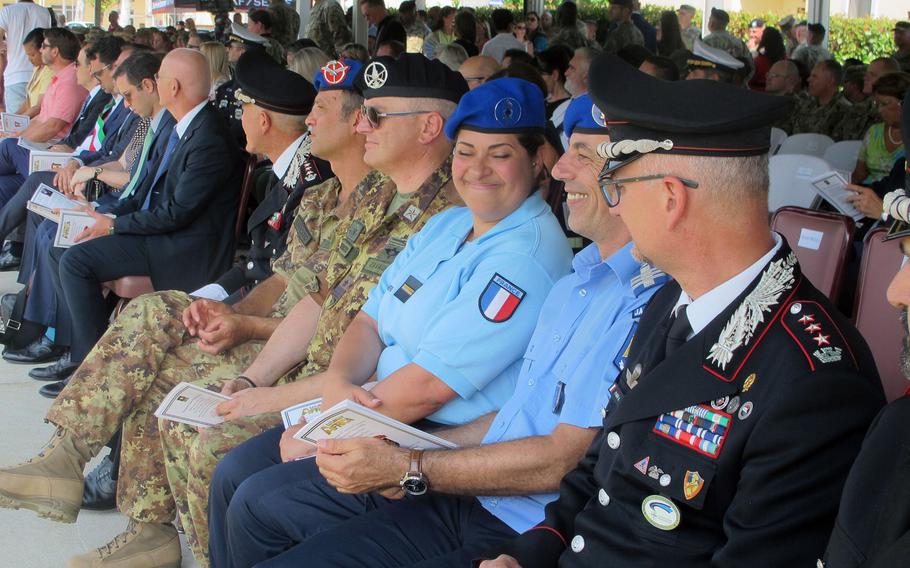 Cloutier, who last served as chief of staff for U.S. Africa Command, promised to “hit the ground running” in directing the component command that coordinates and supports activities of about 2,000 soldiers deployed to some 20 African countries.

“Let’s get after it,” said Cloutier, a former college wrestler reportedly fond of sports metaphors. “Let’s fire off the ball and hit somebody.”

Cloutier took command from Brig. Gen. Eugene LeBoeuf, who came in for a great deal of praise for his year as acting commander, both from Cloutier and AFRICOM commander Marine Gen. Thomas Waldhauser, who hosted the event on Caserma Ederle’s parade field.

LeBoeuf, a Vanderbilt University engineering professor called from the reserves to active duty in 2016, was to serve as USARAF deputy commander when he arrived in Vicenza last summer. Within weeks, he became acting commander after Maj. Gen. Joseph Harrington was removed from command — the result of revelations that earlier that year he’d exchanged many messages, some of them sexually charged, with a local woman married to an enlisted soldier. Harrington was forced to retire and lost a star.

LeBoeuf said that he appreciated the confidence his superiors had shown in him and the willingness of USARAF personnel to embrace his leadership.

“I’m sure everyone was a little apprehensive at the beginning, myself included,” he said. He is slated for promotion to major general and a California command.

Cloutier, a native of Maine, was commissioned in the Army after graduating from the University of San Diego. At AFRICOM, he led a probe into the Oct. 4 ambush in Niger that left four U.S. soldiers dead.

Cloutier has deployed numerous times. In 2005, when he was a lieutenant colonel commanding a task force in Iraq’s Diyala governorate, his relentless pursuit of insurgents after a roadside bomb killed one of his soldiers early in the deployment was chronicled in the Los Angeles Times.

“I don’t want to give (the enemy) any rest or refuge,” Cloutier was quoted as saying. “I want to haunt his dreams.”