US approves sale of Global Hawks to South Korea 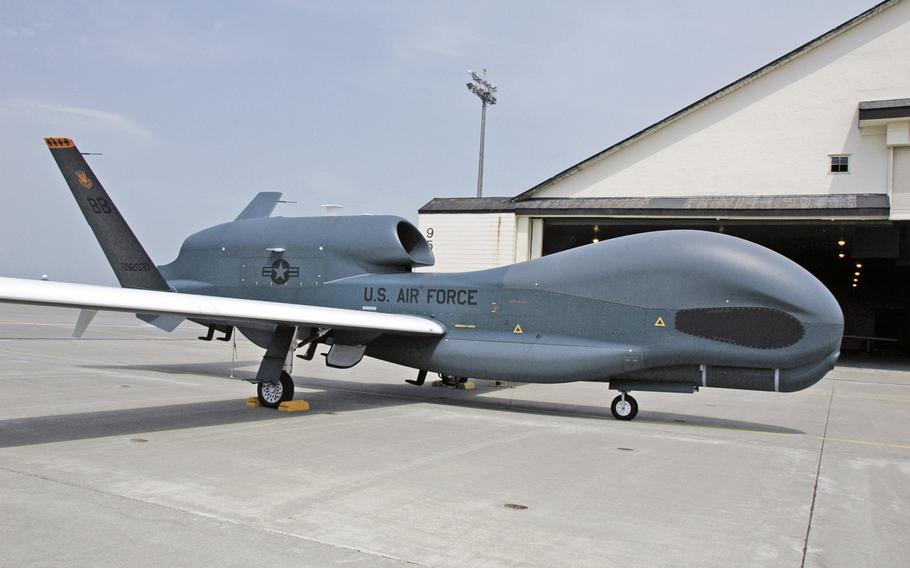 The U.S. government has approved the sale of RQ-4 Global Hawks, like the one pictured here, to South Korea. (Seth Robson/Stars and Stripes)

The foreign military sale is included in a list of contracts announced on the Defense Department’s website Monday.

Northrop Grumman Systems Corp.“has been awarded a $657,400,000 hybrid contract … for aircraft for the Republic of Korea,” the announcement stated.

Northrop Grumman said the contract is the first sale of the aircraft to an allied nation in the Asia Pacific under the Foreign Military Sales process.

Several other U.S. allies in the region, including Japan and Australia, have expressed interest in acquiring the Global Hawk or a naval version of the aircraft — the MQ-4C Triton.

“This will provide critically needed wide-area surveillance capability to military commanders so they can make more informed decisions,” the Northrop Grumman statement said.

The U.S. Air Force has flown Global Hawks out of Andersen Air Force Base, Guam, since 2010 and there are plans to base a pair of Tritons there from 2017.

The aircraft are seen as a key tool in keeping tabs on North Korea’s nuclear weapons development and Chinese naval maneuvers.

Hawaii-based Pacific Forum think tank President Ralph Cossa, a former Air Force officer, said South Korea’s acquisition of the drones is part of efforts to give the country’s military commanders operational control of forces on the peninsula during any war with North Korea.

Under the current arrangement, U.S. commanders would take command of all U.S. and South Korean troops in the event of war.

“Part of the concept of Opcon transfer to the Koreans involves them doing a whole lot of things to upgrade their capabilities,” Cossa said. “This (the Global Hawk) is a significant upgrade.”

The South Korean surveillance planes will add to American situational awareness in the region, he said.

“It is a force multiplier in many respects,” he said of the acquisition. “You are looking for greater contributions from allies and this is certainly a way they will be able to cooperate and add to our capabilities.”

“They certainly won’t be looking at the Chinese but the more the Koreans are doing for themselves frees up U.S. assets to do other things.”

Critics have noted that the slow flying drones are highly vulnerable when compared to manned jet warplanes, and would have problems surviving in conflicts with opponents possessing even basic air defense capabilities.