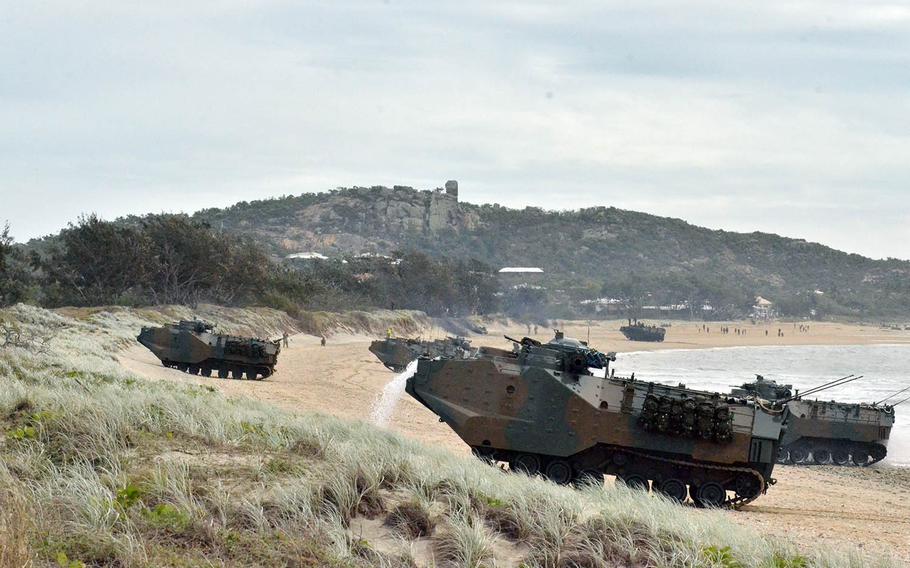 YOKOTA AIR BASE, Japan — U.S. Marines and Japan’s new amphibious brigade will practice amphibious landings on islands off the coast of Japan as part of drills this month involving 46,000 troops from both nations.

The landings will take place during the Keen Sword exercise beginning Oct. 26, Indo-Pacific Command said in a statement Wednesday.

Japan’s Amphibious Rapid Deployment Brigade, a force modeled after the U.S. Marines and charged with defending outer islands, some of which are claimed by China, will participate in the training. The brigade has been building its capabilities with the Marines’ help.

Last year, members of the unit trained at Camp Pendleton, Calif., and practiced beach landings with the Marines in Australia during the biennial Talisman Sabre drills.

Japan’s amphibious brigade will work with members of the Okinawa-based III Marine Expeditionary Force for this month’s landings, the statement said.

During Keen Sword, approximately 9,000 U.S. service members from the Navy, Marine Corps, Army, and Air Force will train with Japanese counterparts throughout Japan, including Okinawa and Japanese territorial waters, according to the statement.

About 37,000 Japanese personnel will be involved along with 20 ships and 170 aircraft, according to a statement from the Japan Self-Defense Forces Joint Staff Office.

Japan’s amphibious buildup has taken place amid tensions in the East China Sea, where China has challenged Japan’s claim to the Senkaku Islands – known as Daioyu by the Chinese – and the nearby oil and gas resources.

It also comes as China is rapidly developing its own amphibious capability.

“The Chinese have recognized the importance of amphibious capabilities not only in their immediate area but also to protect their overseas interests,” Grant Newsham, a former Marine colonel, now with the Japan Forum for Strategic Studies, said in an August phone interview.

Since late last year, the Chinese navy has launched two Type 075 amphibious assault ships that are about the size of the U.S. Navy’s USS Wasp; a third is reportedly due to join the fleet shortly, he said.

“The Chinese don’t have a lot of experience operating them, but they have shown they are fast learners,” he said.

One of China’s new ships took only six months to progress from laying its keel to going in the water, Newsham added.

“That’s almost what the U.S. was doing in World War II to build ships,” he said.

The Chinese threat creates a sense of urgency, Newsham said in an email Thursday. The more training that the Japanese amphibious unit does with the Marines, the more it will improve its skills, he added.

“The ability of American and Japanese forces to conduct joint operations is an absolute ‘must’ if the Japan-US defense alliance is to have any meaning,” he said. “Otherwise it’s just a nice sounding concept — without any ‘teeth’ — and the Chinese know it.”