US and Indian troops wrap up counter-insurgency, terrorism drills 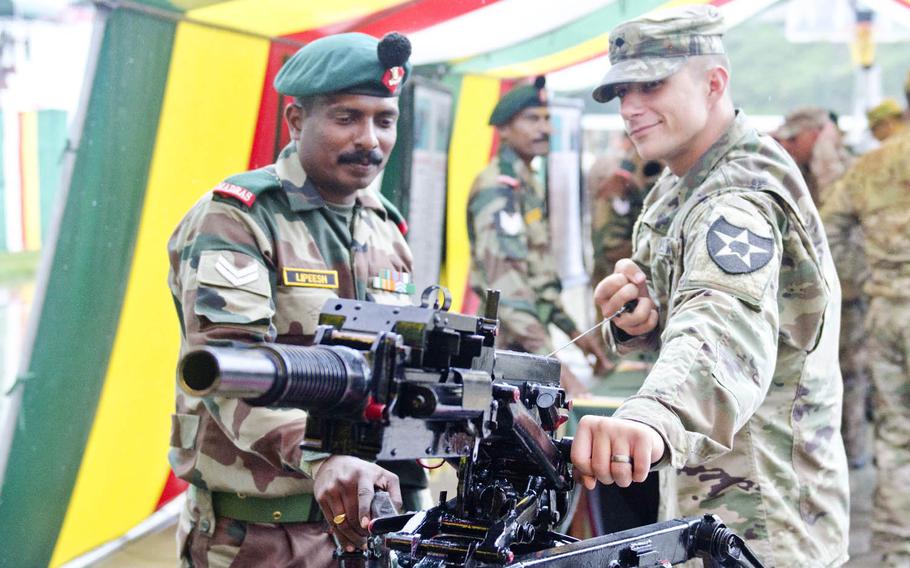 U.S. and Indian troops are wrapping up counter-insurgency and counter-terrorism training this month in Uttarakhand, an Indian state that borders Chinese-occupied Tibet.

The 22-day exercise at the Chaubattia Military Station aims to hone the soldiers’ ability to plan and conduct missions together, Shannon said in an email Friday.

“We are teaching each other operational planning and lessons learned from operational experiences,” she said.

The U.S. and Indian armies have been fighting Islamic extremists in separate theaters for decades. India, with a minority population of nearly 140 million Muslims, deals with regular terrorist attacks by separatists and Pakistan-based extremists. A cross-border incursion into Kashmir killed 19 Indian soldiers this month.

The allies are also coming to grips with the rapidly growing military clout of China, which is at odds with the U.S. over aggression in the South China Sea and with India over mountainous territory where a brief border war was fought in 1962.

Yudh Abhyas, conducted in heavily forest areas at altitudes between 6,000 and 7,800 feet, has focused on counter-insurgency and counter-terrorism, according to The Times of India.

One of the 1-2 soldiers participating, Spc. Gurpreetsingh Gill, lived in India for 24 years and graduated from Rajasthan University before moving to America in 2012 to work as an information technology consultant in Chicago.

Gill, a Sikh who joined the infantry in 2014, said in an email that he has been sharing tips on local culture with his comrades.

“I try to share my knowledge to each and every soldier in terms of casual greetings in Hindi/Punjabi language, about Indian food and festivals, the way Indian society is divided, its geographical area, political system, sports (such as cricket) and many other things about Indian culture,” he said.

The Americans are learning about how Indian troops communicate, organize their chain of command and how they conduct counter-insurgency and border security in different types of terrain, he said.

Meanwhile, the Indians are learning about modern U.S. military technology, the latest first-aid techniques and America’s support for its veterans, he said.

The world’s two largest democracies have much in common. Both have diverse populations and a growing trade relationships, Gill said.

“Lots of Indians settle down in the U.S. and they understand both country’s political and financial systems which gives the U.S. a great opportunity to get close to India,” he said.