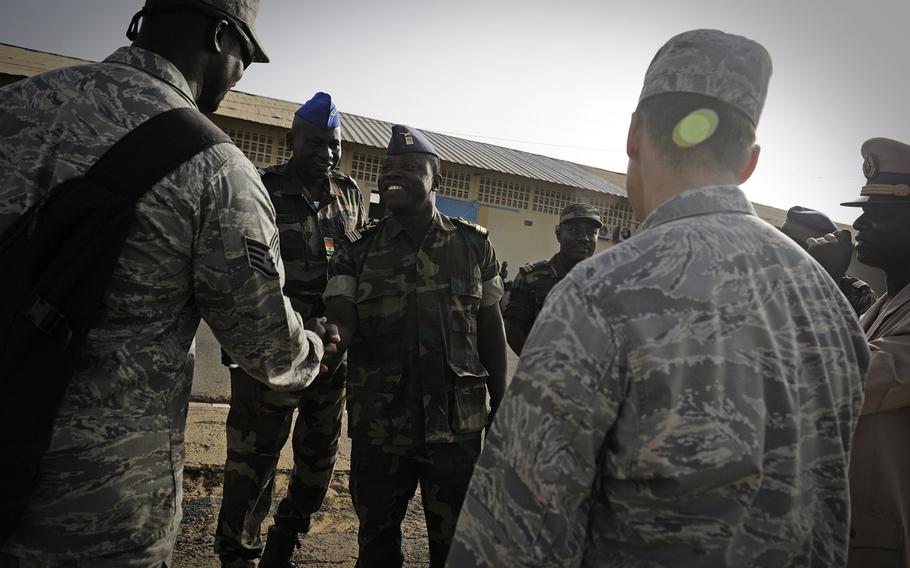 Airmen from the Ghanaian Air Force stand in formation during an opening ceremony for the African Partnership Flight in Dakar, Senegal, on Monday, June 16, 2014. USAFE-AFAFRICA airmen are in Senegal for the program, which is designed to improve communication and interoperability between regional partners in Africa. (Ryan Crane/U.S. Air Force) 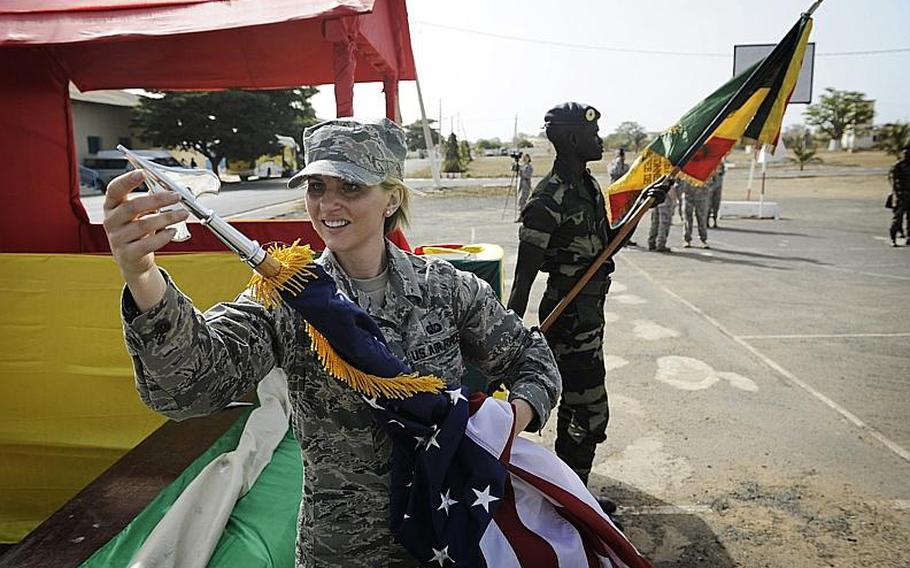 KAISERSLAUTERN, Germany — A fledgling program bringing together U.S. airmen from Europe and the United States with their counterparts in western Africa is being revived after a lull related to budget constraints.

This week, about 150 people from nine countries are participating in the African Partnership Flight in Dakar, Senegal, a program funded by U.S. Air Forces in Europe–Air Forces Africa.

The inaugural event was held in Ghana in March 2012, but budget constraints brought on by sequestration stalled further such events until this past spring, said Maj. James Renfro, a USAFE-AFAFRICA international affairs specialist who serves as the African Partnership Flight mission commander. In March, Angolan, U.S. and Zambian air forces met for a week in Luanda, Angola.

The training this week, held mostly inside tents on a dirt soccer pitch at a military base next to Dakar’s international airport, involves Senegal, Togo, Ghana, Benin, Mauritania, Niger, Nigeria, Burkina Faso and the U.S.

“The concept now is we will do three of these per year,” Renfro said. “A lot of these countries are requesting us to come in and provide some kind of assistance.”

Though much of the instruction is led by the Air Force, the program’s goal is to strengthen relationships among countries with air forces of varying capabilities operating on a continent more than three times the size of the U.S.

“It’s to bring regional partners together to build regional cooperation and interoperability,” Renfro said this week in a phone interview from Senegal. “We want to facilitate them discussing among themselves.”

The hope is that those open lines of communication and better familiarization will enable those countries to respond together to natural disasters or other crises,, officials said.

AFAFRICA developed the African Partnership Flight concept in 2012 as a way to support U.S. Africa Command and its security cooperation program, Renfro said.

While many countries in Africa have their own air force, “the real challenge is their capabilities vary from nation to nation,” said Capt. Frank Hartnett, a USAFE-AFAFRICA spokesman.

Chief Master Sgt. Bill Wunderlin, a loadmaster instructor from the California Air National Guard, is teaching loadmaster procedures with a colleague this week. Their lessons were initially focused on C-130 aircraft — until they learned that only two of the participating nations, Nigeria and Niger, have C-130s, Wunderlin said.

“One country has one C-130 and the other has about 10, but what I was told was about half of their fleet’s operating,” he said.

So lesson plans were adjusted to reflect instruction that can be applied across airframes. Most of the participants come from air forces that fly helicopters and smaller transport planes, Wunderlin said. The students also tell instructors what they want to talk about, he said. One request: How to load an aircraft tug on a Senegalese helicopter.

“They were like, ‘That’s what we need to do because we’ve been hauling equipment in 55 gallon fuel drums without any of this stuff underneath it,’” Wunderlin said.

Other workshops on tap included mission planning, aeromedical evacuation, base defense and ground and flight safety.

Capt. Brandon Schrader, a C-130 pilot from the 934th Airlift Wing out of Minneapolis, Minnesota, was to take about 30 students on a familiarization flight this week, showing “them how we conduct a flight from start to finish.”

The training, he said, goes both ways. Schrader found out that, in Africa, country borders don’t always match “what we have in our charts.”

“Speaking to local pilots, we had to adjust our flight plan due to border disputes with some of the countries,” he said.

Networking during the exercise could pay dividends down the road, Hartnett said.

“You never know which nation you see out there at the training site will be the nation we’ll be asked to deliver supplies (to) or assist in some way,” he said.

The hope, he said, is that “that person you’re sitting across the table from today could be the voice on the end of the line” when a mission needs to be accomplished sometime in the future.