US, allies share NCO expertise among 31 nations at London conference 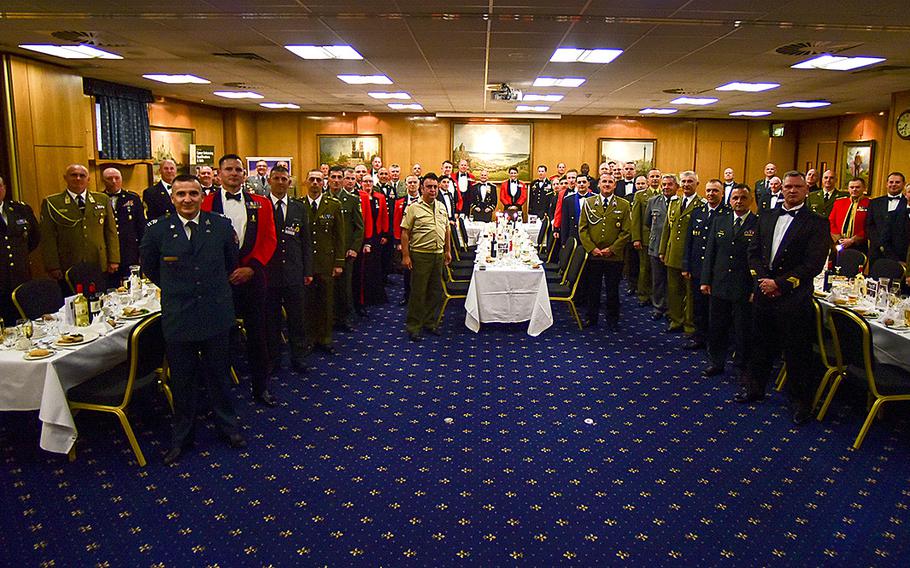 Top noncommissioned officers from across Europe and the U.S. gather before a formal British regimental dinner at the 12th annual Council of European Armies for Noncommissioned Officers, Thursday, May 3, 2018, in London. The three-day event focused on education, professionalism and developing relatively new NCO corps across the Continent. (Tamika Dillard/U.S. Army) 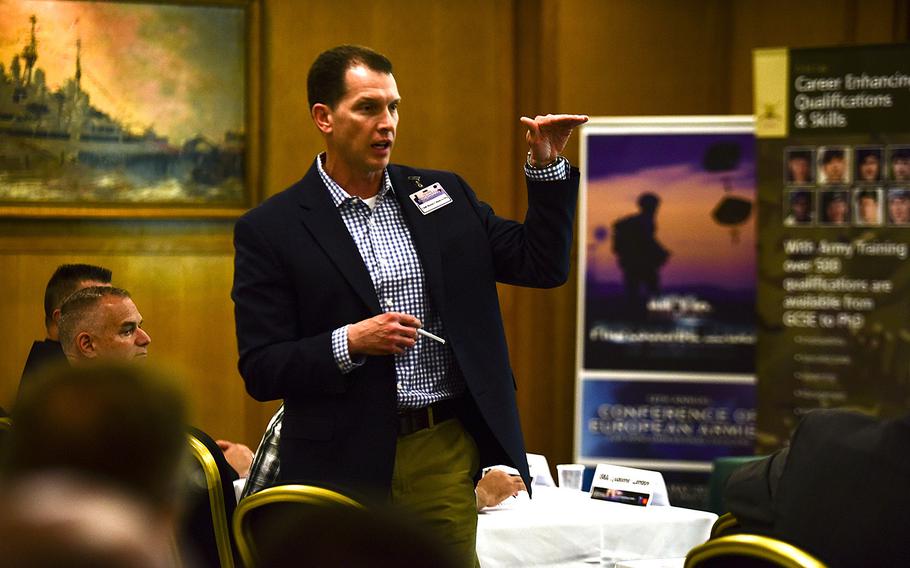 It’s called the backbone of the U.S. Army and it’s existed for more than 200 years, but not every country has a developed noncommissioned officer corps.

Representatives from the United States and dozens of European countries gathered in London this week for the Conference for European Noncommissioned Officers, which is intended to change that. The three-day event, in its 12th year, also aims to build familiarity among far-flung allies.

Ukraine, which is in the midst of a battle with Russia-backed separatists, sent a warrant officer to the conference. Just this year, it opened three schools and began tiered education for NCOs. The Ukrainian parliament is also considering bills that would raise NCO wages and allowances.

U.S. Army Europe’s Command Sgt. Maj. Robert Abernethy – attending the conference only two weeks into his new position in Wiesbaden – said he feels progress is being made, despite the relative youth of some NCO corps.

“You look at the British NCO corps, more than 400 years old, or the U.S. NCO corps, hundreds of years old — the great thing about these young corps is that it won’t take them 200 or 400 years to learn all the lessons we’ve learned in that time, so they can significantly truncate that process, so a few years from now you’re going to see some very, very effective NCO corps.”

The experienced among the group contrast with nations like Bulgaria, which hosts the U.S.-led NATO alliance’s Novo Selo tank range. The Eastern European nation began building its NCO corps earlier in the decade.

“There is a Bulgarian NCO corps,” Bulgaria’s first sergeant major of the army, Lyubomir Lambov, told the Army’s NCO Journal in 2012. “But NCOs in the Bulgarian army are more like ‘senior soldiers,’ not professional NCOs like in the United States. We have an enlisted rank structure now, but that had to be created from nothing.”

In the U.S. system, NCO responsibilities include managing soldiers, handling budgets and advising officers on many issues. Relatively junior officers, such as lieutenants and captains, are paired in command with senior NCOs, who normally possess at least a decade’s worth of experience.

One way Abernethy and Haughton hope to convey the lessons their NCOs have learned over the years is by having attendees get better acquainted in case they have to serve together in conflict.

“(These conferences) benefit me in a huge way, I have to say,” Haughton said. “Not just so much the content that I learn personally, but more so from the social networking in terms of other sergeants major from around Europe. It’s just been essential for the way I do my business.”

On Wednesday afternoon, attendees traveled to the Royal Hospital Chelsea – a retirement and nursing home for elderly British veterans – and the British Army Museum.

“We’d be fools not to take advantage of the culture rooted here in England,” Abernethy said. “For me that’s huge because it gives me more than an inch-deep knowledge of the British army.”

The conference ended with a formal British regimental dinner on Thursday night. Guest speakers from the British and U.S. armies discussed training, education and professional growth. NCOs from Georgia, Norway and Bulgaria led a panel discussion as well.

Abernethy said that the familiarity he gained with his counterparts in other armies was invaluable.

“The thing that I found amazing is that we are much more alike than we are different,” he said. “That’s very healthy, that puts us in a good spot especially as we work together to try to help each other out.”