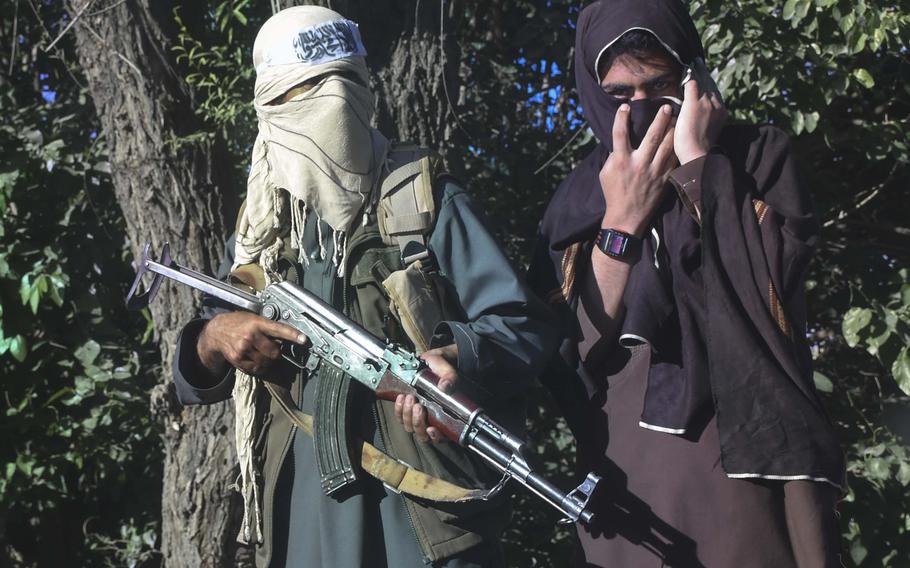 Armed militants watch a convoy pass through Logar province during a cease-fire between the Taliban and the Afghan government in 2018. A new reports says the terror group killed more than 6,000 people last year. (J.P. Lawrence/Stars and Stripes)

KABUL, Afghanistan — Military successes by the U.S. and its allies against terrorist groups helped drive down global deaths from terrorism in 2018 for the fourth consecutive year, a report released this week said.

But even as terrorism deaths declined in most countries, they soared in Afghanistan, despite the U.S. launching peace talks with the Taliban that year to try to end decades of war in the country.

Terrorism deaths in Afghanistan soared by nearly 60% to more than 7,300 in 2018, with most of those casualties blamed on the Taliban, which overtook the Islamic State group to become the deadliest terrorist organization in the world, said the Global Terrorism Index 2019 report released Wednesday.

At the same time, military successes against ISIS caused it to sharply lose ground in Iraq and Syria, said the report, which has been compiled annually since 2013.

U.S. airstrikes in Somalia also led to a decline in terrorism deaths there and a 24% fall in attacks by the al-Shabab terror group, the report said.

As ISIS buckled under military pressure, terrorism deaths in Iraq fell by 75% in 2018, the report said.

For the first time since the U.S.-led invasion of Iraq in 2003, it was “no longer the country most impacted by terrorism,” the report said. Afghanistan has taken over the top spot that no country wants.

Six of the 13 terror groups or movements that were responsible for more than 100 deaths in 2018 were in sub-Saharan Africa, the report said.