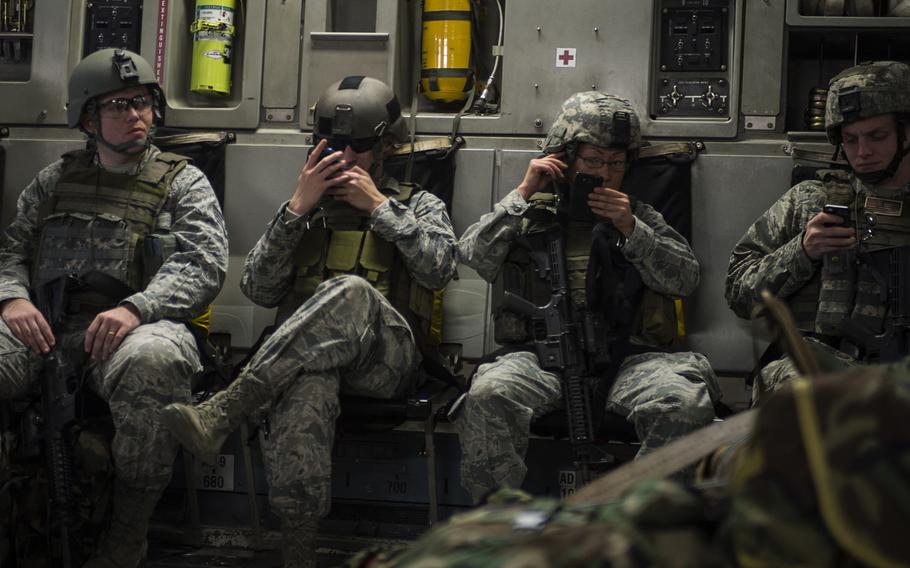 Airmen check their cellphones during a flight aboard a C-17 Globemaster III on Jan. 13, 2014. NATO's long-standing advantage in air, at sea and on land could be put at risk as highly skilled cyber adversaries probe for weaknesses. (Kenneth Norman/U.S. Air Force)

NATO’s long-standing tactical advantage on the battlefield could be at risk as cyber adversaries probe for weak points in the U.S.-led security pact’s networks, a top alliance official said.

“This very advantage now has the potential, if we are not careful, to make us vulnerable to attack,” NATO Deputy Secretary-General Rose Gottemoeller said at the end of a cyber conference in Mons, Belgium, on Thursday.

NATO’s three-day cyber symposium, which drew together national leaders, experts and industry specialists, comes at a time when Russia is being widely blamed for targeting Western troops and institutions with a more aggressive cyber-battlefield strategy.

U.S. soldiers deployed to Poland have had their smartphones hacked while operating near Russia’s bordering enclave of Kaliningrad, according to Army leaders.

Russia is also using social media networks to target U.S. military personnel in misinformation campaigns that flood troops with a range of propaganda and conspiracy theories, according to an Oxford University study released earlier this month.

The threats to NATO today range from “tweets to tanks,” but “when it comes to cyber, we are still learning,” Gottemoeller said. “We must be fast learners.”

A prime target has been rank-and-file forces along NATO’s eastern flank, where U.S. and other allied troops are deployed on a mission to deter Russian aggression.

“Yes, these are attempts to collect intelligence, intimidate NATO allies and rattle foreign troops,” said Jorge Benitez, an expert on European security with the Washington-based Atlantic Council. “The Russians are pushing the envelope through this cyber- and hybrid-warfare campaign to see how much they obtain from it, not just in terms of information and military friction, but most of all increasing political divisions and vulnerabilities for the West.”

Better coordination on cyber and hybrid attacks could be accomplished by building upon NATO’s Multinational Corps Northeast Headquarters in Szczecin, Poland, Benitez said. The corps is made up of four multinational battalions, deployed in Poland, Estonia, Latvia and Lithuania.

“NATO says it is paying a lot of attention to this, but most of it is deferred to the national level,” said Benitez, adding that lack of cohesion can result in uneven defenses among allies.

NATO has adopted a stronger cyberspace posture. It has added the cyber realm as a formal operational domain, akin to missions by land, sea and air. The alliance has also worked to improve information sharing, helping to counter malware attacks and other threats.

In 2016, NATO agreed that cyberattacks might be sufficient to trigger the alliance’s collective defense Article 5 provision, which deems that an attack on one member requires a collective response from all.

It remains a matter of debate inside NATO about what kind of assault would be large and severe enough for all 29 member states to agree to respond.

“With all this talk of cyberattacks, it is important to underline the fundamentally defensive nature of the NATO alliance,” Gottemoeller said.