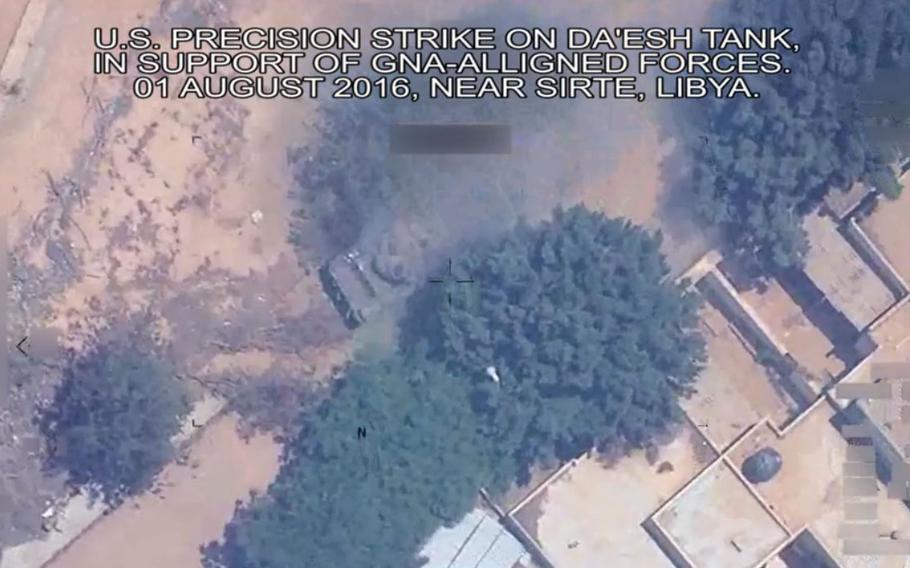 A single strike targeted a pickup truck with a mounted recoilless rifle in the coastal city of Sirte, the militant’s main stronghold in Libya, according to information provided by U.S. Africa Command, which is overseeing the operation. (U.S. Africa Command)

The single strike targeted a pickup truck with a mounted recoilless rifle in the coastal city of Sirte, the militant’s main stronghold in Libya, according to information provided by U.S. Africa Command, which is overseeing the operation.

Forces backing Libya’s U.N.-recognized Government of National Accord have been battling Islamic State group militants in Sirte for months.

The U.S. military has conducted nine airstrikes against Islamic State group targets since it began its new mission, entitled Operation Odyssey Lightning, this week in support of the GNA.

President Barack Obama approved the airstrikes that began Monday, but he limited them only to targets specifically requested by the GNA in its fight in Sirte. Military officials have said they expect the operation to last several weeks, but there is no specific cutoff date for the airstrikes.

At the beginning of 2016, the Islamic State group was believed to have more than 5,000 fighters in Libya, including more than 1,000 in Sirte. Navy Capt. Jeff Davis, a Pentagon spokesman, said the group is significantly smaller now, estimating there could be less than 1,000 left.

Obama on Thursday was visiting the Pentagon where a meeting with top national security leadership was expected to focus on the Islamic State group in Iraq and Syria. But officials said the terrorist group’s smaller affiliates in Libya and Afghanistan would likely be discussed as well.

Davis said the United States is committed long term to backing the GNA, especially in its fight against the Islamic State group, which is present in small numbers in other areas of the country.

GNA forces control most of northern Libya, and they have been largely successful against the Islamic State group in Sirte, Davis said. They requested American airpower for “help getting across the finish line,” he said.

Airstrikes, which have destroyed key Islamic State targets, including a pair of tanks, have been conducted by manned and unmanned aircraft. Davis declined to say where the U.S. attacks were launched.

On Wednesday, Italy’s Defense Minister Roberta Pinotti said her country would allow the United States to launch airstrikes from the air base at Signonella in Sicily.