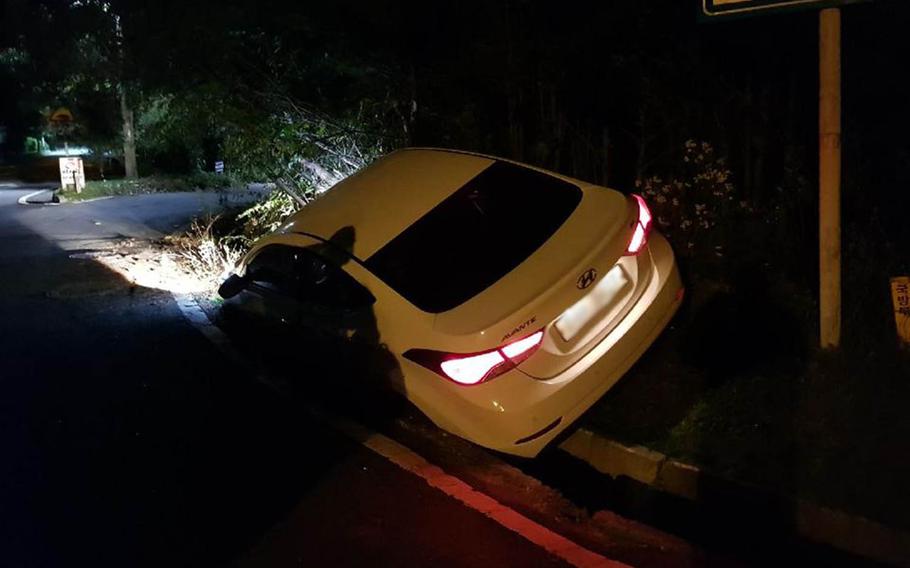 Air Force Maj. Jeremiah Guild and Capt. Michael Day, both assigned to the 7th Air Force at Osan Air Base, South Korea, pulled a driver from a car after an accident in Seoul, Oct. 17, 2017. (Courtesy of the U.S. Air Force)

Air Force Maj. Jeremiah Guild and Capt. Michael Day, both assigned to the 7th Air Force at Osan Air Base, South Korea, pulled a driver from a car after an accident in Seoul, Oct. 17, 2017. (Courtesy of the U.S. Air Force) 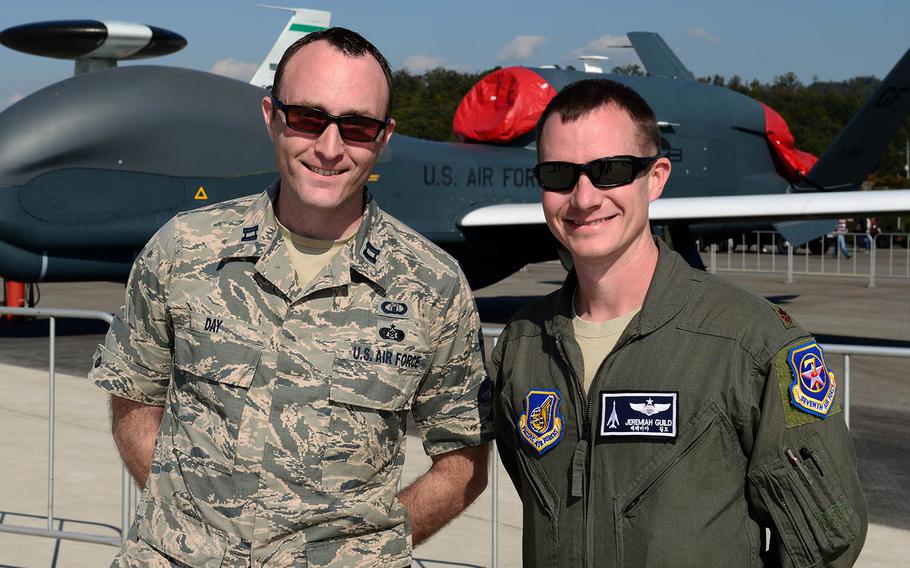 OSAN AIR BASE, South Korea — A pair of Osan-based airmen rescued a South Korean woman trapped in her car after crashing into a ditch in Seoul, the Air Force said.

Maj. Jeremiah Guild and Capt. Michael Day of the 7th Air Force were driving home from Seoul at about 1:30 a.m. on Oct. 17 when they spotted what they thought was an abandoned car on the side of the road, a statement said.

The two had been working at the International Aerospace & Defense Exhibition 2017, a multinational defense trade and air show.

“We had just finished working for the day and were driving on this dark, back road when we saw the crash,” Day was quoted as saying. “Then, we slowed down and could see a Korean woman banging on the glass frantically trying to get out of her car.”

The car was stuck in the ditch and none of the doors would open. Day and Guild rushed into action and were eventually able to open one of the rear passenger doors and pull the woman out.

“The car was at such an extreme angle I had to climb down to get to her,” Day said. “So, I pulled her out and we took her across the street to safety.”

Not wanting to abandon the woman but unable to communicate with her, the airmen called another Osan-based airman, Capt. Jacob Berry of the 25th Fighter Squadron, who was able to speak Korean with the woman. They then called South Korean emergency services who arrived and took over the scene.

Seventh Air Force officials said they did not know the woman’s identity and had no other details.

Guild said the decision to stop and help was a no-brainer.

“I know [the South Koreans] wouldn’t hesitate to stop if I was on the side of the road and needed help — so of course I would stop for our friends here,” Guild said in the statement.

Police said the officers with knowledge of the rescue were unavailable to comment at the time of Stars and Stripes’ inquiry.