US Air Force to join large-scale aviation exercise in Ukraine 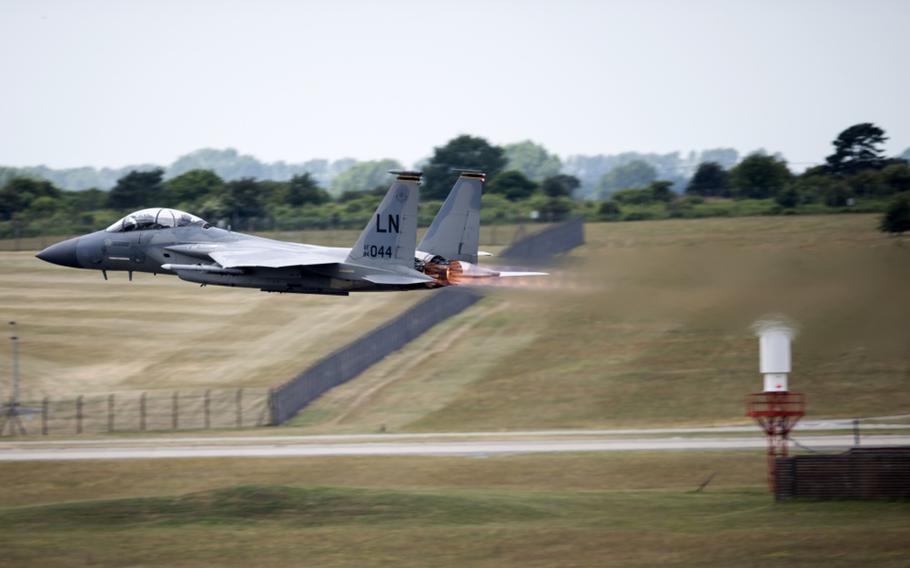 An F-15D takes off at RAF Lakenheath, England, in June of 2018. An F-15D from Lakenheath will join Ukraine for the first-ever Clear Sky exercise, scheduled to take place mid-October, primarily at Starokostiantyniv Air Base, Ukraine. (Micaiah Anthony/U.S. Air Force)

The U.S. Air Force and eight other nations will participate next month in independent Ukraine’s largest aviation exercise, which aims to promote regional security and improve that country’s cooperation with NATO members, the military said Tuesday.

Announcement of the Clear Sky multinational exercise comes days after Ukraine said it would establish a new naval base along the Sea of Azov to counter a more assertive Russia.

The U.S. plans to send about 450 personnel from bases in the States and in Europe, a U.S. Air Forces in Europe spokesman said Tuesday. About 250 will participate in the exercise, including pilots and maintainers; the remainder will be in support roles.

Clear Sky is one of several joint and multinational exercises being conducted in Ukraine this year aimed at promoting regional security, defense officials said.

Ukraine is not a NATO member but has declared its interest in joining the alliance. Cooperation between NATO and Kiev has expanded swiftly since Russia’s 2014 annexation of Ukraine’s Crimean Peninsula.

A total of some 950 personnel are slated to take part in Clear Sky. Besides Ukraine and the United States, Belgium, Denmark, Estonia, the Netherlands, Poland, Romania and the United Kingdom are participating.

The exercise will take place mainly at Starokostiantyniv Air Base, located about 150 miles southwest of Kiev, and other training areas and ranges in Ukraine.

U.S. participants will include the Air National Guard and other stateside and overseas units, according to USAFE. This year marks the 25th anniversary of collaboration between the California Air National Guard and Ukraine as part of U.S. European Command’s State Partnership Program. California units will be heavily represented, with F-15C Eagles and C-130J Super Hercules, USAFE officials said in a statement.

Other U.S. aircraft participating include an F-15D from the 48th Fighter Wing at RAF Lakenheath, England; KC-135s from the Illinois Air National Guard and the 100th Air Refueling Wing; and MQ-9s operating out of Miroslawiec Military Air Base, Poland. The Pennsylvania Air National Guard will provide instructors.