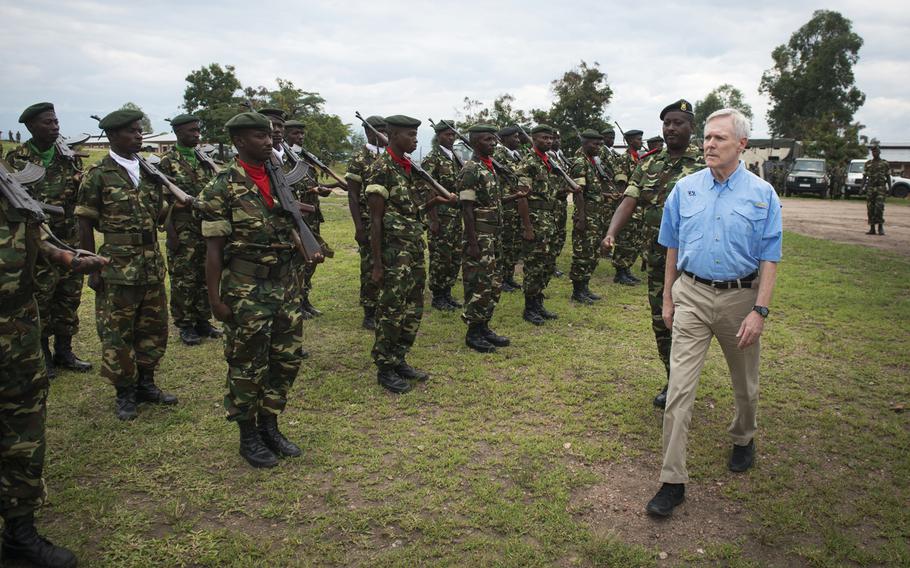 Secretary of the Navy Ray Mabus reviews Burundi National Defense Force (BNDF) troops during a visit to Bujumbura, Burundi, Nov. 21, 2013. A Pentagon spokesman said Dec. 9, 2013 that 850 Burundian troops will be airlifted from Burundi to CAR in U.S. C-17s for a peacekeeping mission in the Central African Republic. (Arif Patani/U.S. Navy)

French Minister of Defense Jean-Yves Le Drian on Sunday asked Defense Secretary Chuck Hagel, in the midst of a five-country visit to the Middle East, for airlift support to help African forces to quickly deploy into the country.

The airlift is expected to begin within the next 24 hours, according to Pentagon spokesman Maj. Rob Firman, adding that 850 Burundian troops will be airlifted from Burundi to CAR in American C-17s. Flying time is approximately 3 hours from Burundi to CAR, he said.

France is deploying 1,600 troops to the country, a former colony that has been wracked by violence in recent days of sectarian fighting between the Seleka rebel coalition, a Muslim group that seized power in April, and Christians in the country.

French officials announced Saturday that the African Union would increase its peacekeeping force to 6,000 troops to attempt to quell fighting that has claimed hundreds of lives in recent days.

Woog said the U.S. military was working to identify other resources to help with the humanitarian crisis.

“The United States is joining the international community in this effort,” he said, “because of our belief that immediate action is required to avert a humanitarian and human rights catastrophe in the Central African Republic, and because of our interest in peace and security in the region.”