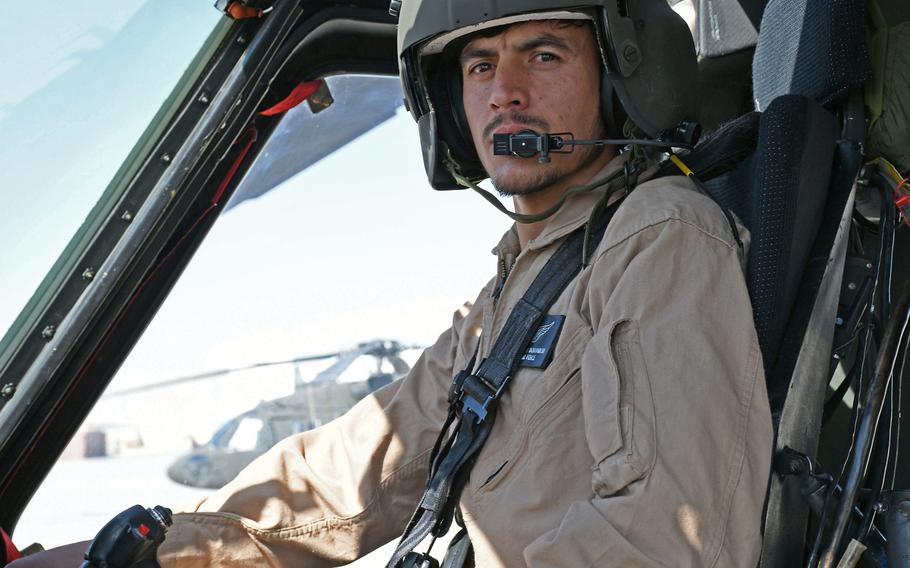 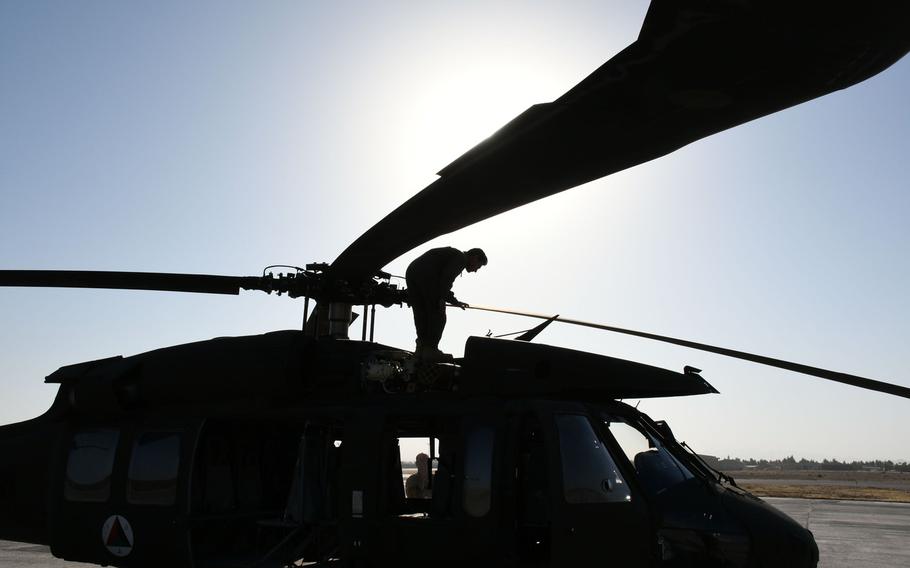 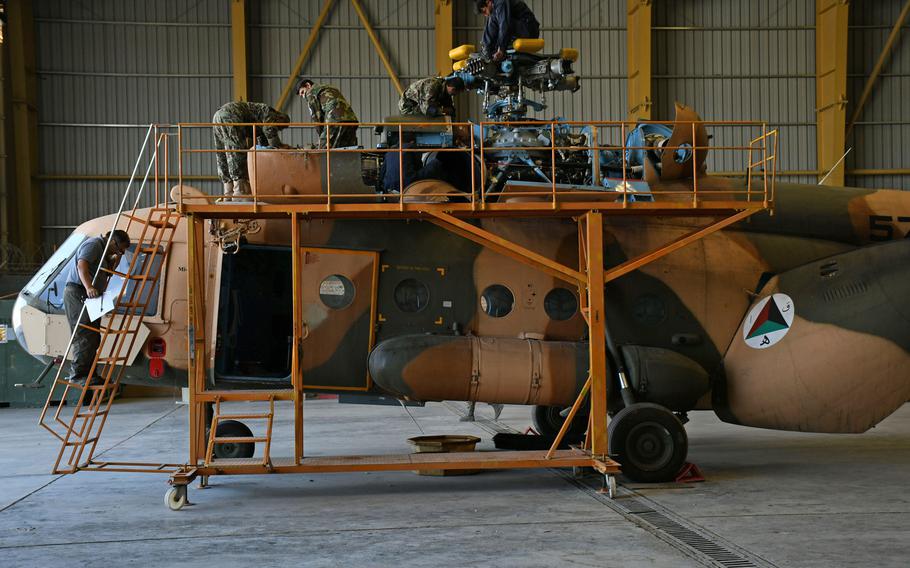 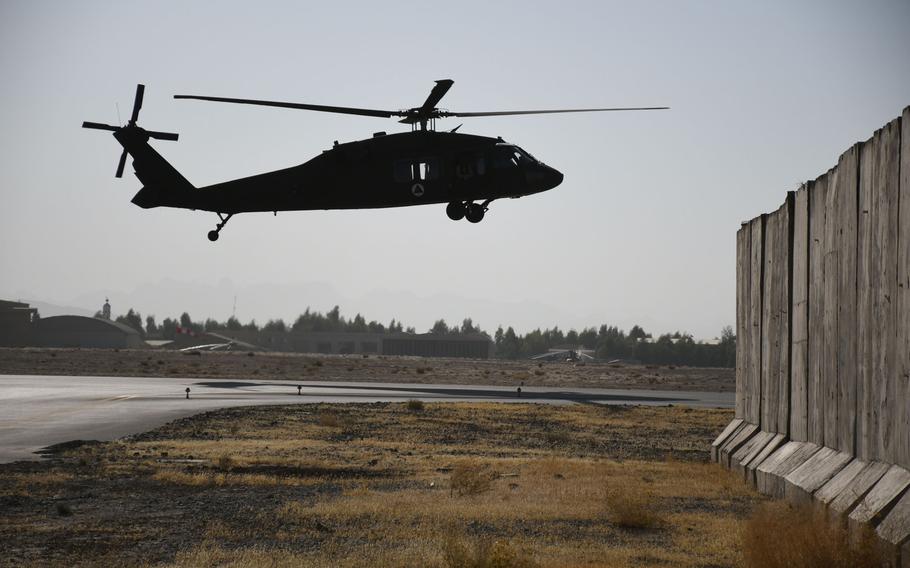 Buy Photo
An Afghan pilot practices flying one of Afghanistan's new UH-60 Black Hawk helicopters at Kandahar Air Field on Sunday, Nov. 5, 2017. The U.S. is in the process of giving the Afghans 159 Black Hawks to replace their aging fleet of Russian-made Mi-17 helicopters. (Phillip Walter Wellman/Stars and Stripes) 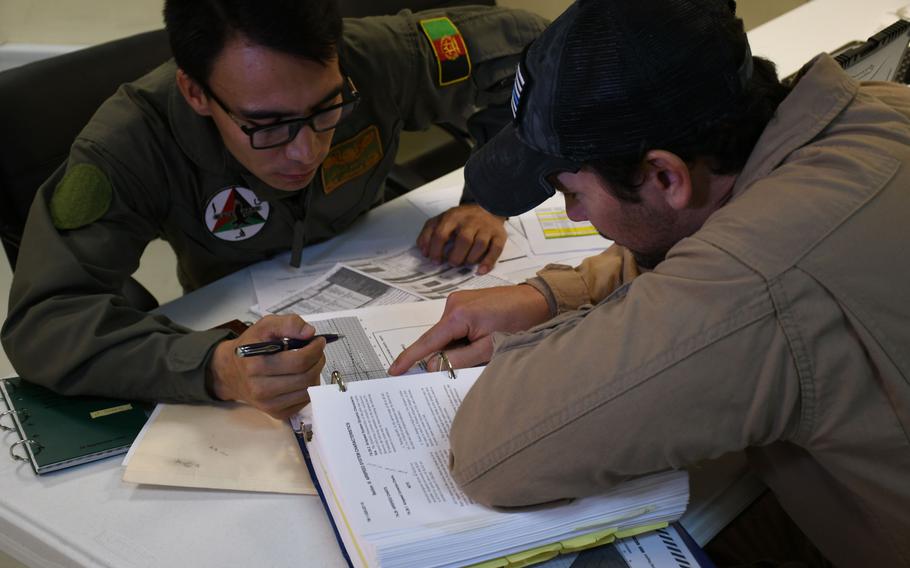 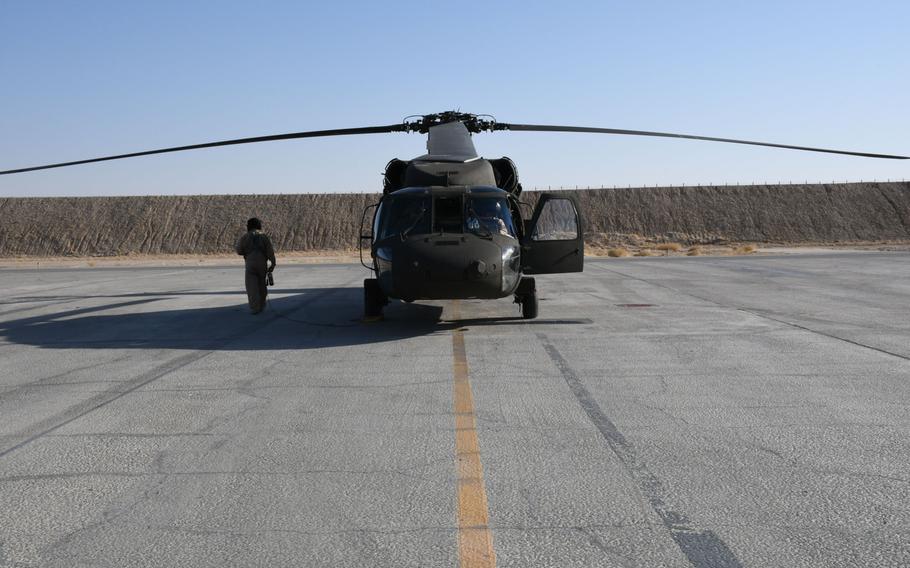 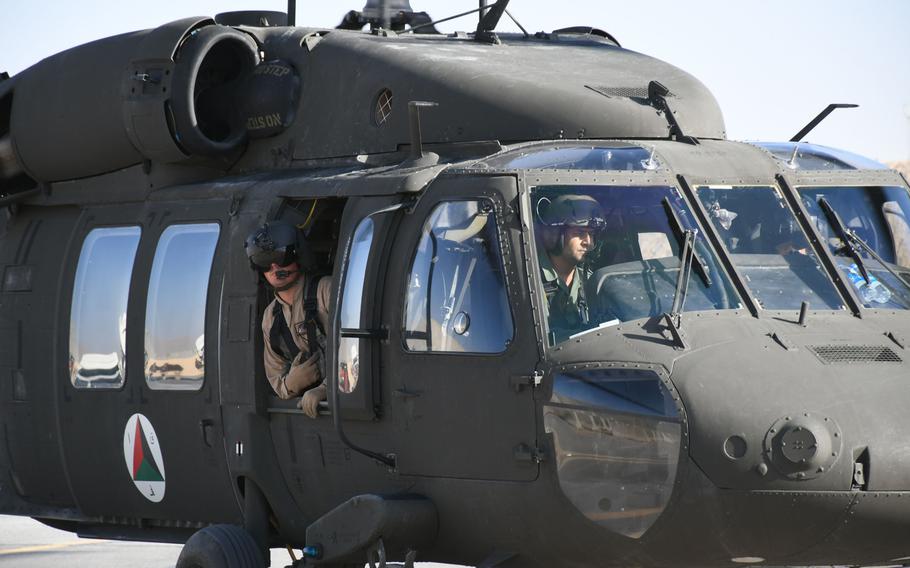 KANDAHAR AIR FIELD, Afghanistan — The helicopter plunged downward and looked like it might crash, before deftly lifting its nose and continuing its flight.

“That move right there is an auto rotation,” Army Maj. Alexmi Lugo said, looking up and squinting in the bright Kandahari sun. “The pilot’s practicing how to land the aircraft when the engine goes out.”

Lugo, a program manager with NATO’s Train, Advise, Assist Command-Air unit, is laying the groundwork for the Afghan air force’s new UH-60 Black Hawk program that is reportedly costing the U.S. more than $1 billion. The pilot flying above was one of the first Afghan trainees on the new choppers.

Afghanistan is scheduled to receive 159 U.S.-funded Black Hawks by 2024 to replace an aging fleet of Russian-made Mi-17s, part of a larger modernization effort that will more than double the aircraft in the air force’s inventory.

As insurgents continue to make gains 16 years into the war, U.S. and Afghan military leaders say that stronger air capabilities will give Afghan forces a distinct advantage on the battlefield, enabling them to defeat more enemies and rely less on U.S. combat support.

As part of the Black Hawk deal, UH-60A models are being upgraded to a UH-60A+ variant with more powerful engines. Fifty-eight of the aircraft will be fitted with additional rocket pods and machine guns to provide close air support like the Mi-17s — the current backbone of the Afghan air force, used primarily for transporting troops and supplies and performing medical evacuations.

Restrictions on doing business with Russian arms manufacturers have prevented the U.S., which supports the Afghan military financially, from providing new Mi-17 parts and aircraft. Army Gen. John Nicholson, the top U.S. commander in Afghanistan, has warned the fleet is becoming unsustainable.

Critics have called the switch politically motivated and fear that a transition to the American-made aircraft could hurt Afghan forces in the short term. Lugo dismissed those concerns.

“I’m pretty sure these guys flying the Mi-17s will be able to transition,” he said, adding that basic rotary wing skills are transferable between aircraft. “At the end of the day, they’re flying helicopters.”

The Afghans have received two Black Hawks so far, with two more expected later this month. Just days after the first helicopters touched down at Kandahar Air Filed, six pilots began a six-week training course to learn how to fly them.

The trainees were reviewing emergency procedures four weeks into the course at their training school in a dusty corner of the base.

“Of course, flying any new aircraft is challenging,” said Capt. Jawad Saqib, 32. “But we love it. The systems are different, but it’s suitable and it’s stable.”

Contractors from the Huntsville, Ala.-based Science & Engineering Services run the school. The trainees normally get about 90 minutes of flight practice each day, followed by several hours of classroom instruction, during which they review a 4-inch-thick training manual that they must partly memorize.

“There are many more things we have to think about,” Saqib said. “We’re all studying until night.”

After the six-week aircraft qualification course is finished, the trainees must go through 10 weeks of mission training. Those who pass will fly missions with U.S. military advisers until they are deemed proficient to operate alone, which could take up to a year, officials said.

For now, the focus remains on training pilots, a task made more difficult because it’s happening during a war.

“This is not the only game in town,” Lugo said on the tarmac as Reaper drones and other aircraft used by the U.S.’s Freedom’s Sentinel counterterrorism mission and the Afghan military intermittently took off and landed around him.

Not only do the trainee pilots make way for other operations at the base, but the hostile environment means they can’t land their aircraft just anywhere.

While practicing his morning maneuvers, Capt. Zabihullah Dorandish, 27, circled above the heavily protected base over a dozen times before landing.

“Today was perfect,” he said confidently as he took off his helmet and held it by his side. “It will do well. The power is good and flying it is starting to become normal for us.”

“The most complicated thing was with the radio communication,” he added. “I didn’t catch everything.”

The radio communication was in English. Language proficiency for both pilots and maintainers has concerned some observing the air force’s development.

Plans for a UH-60 maintenance training program have not yet been finalized, according to NATO officials, who say contractors will perform maintenance for the time being.

It takes five years to train a maintainer, as opposed to three years for a pilot with no prior experience.

In a cavernous hangar in another area of the base, metal tools clanked as Afghans performed maintenance work high atop an Mi-17. Because the Afghans have had Mi-17s for decades, they’re often able to work in their own language.

As the Russian aircraft get phased out, they’ll need to know English to read the Black Hawk technical manuals.

“The literacy rate in Dari and Pashto isn’t the greatest, and now you’ve got to teach them English. It’s going to be a pretty big challenge,” said Air Force Maj. Charles Schultz, commander of the 442nd Air Expeditionary Advisory Squadron, who works with the maintainers.

But the maintainers have welcomed the UH-60s arrival, Schultz said.

It’s a feeling that seemed ubiquitous at the Kandahar base: While shifting to the Black Hawks may pose challenges, it’s necessary to beat the insurgents.

“The tool to fight is very, very important,” said Sadat, one of the UH-60 trainee pilots, who asked to be identified by one name for security reasons. “If you have better tools than the enemies, absolutely you are going to have more success than them.”