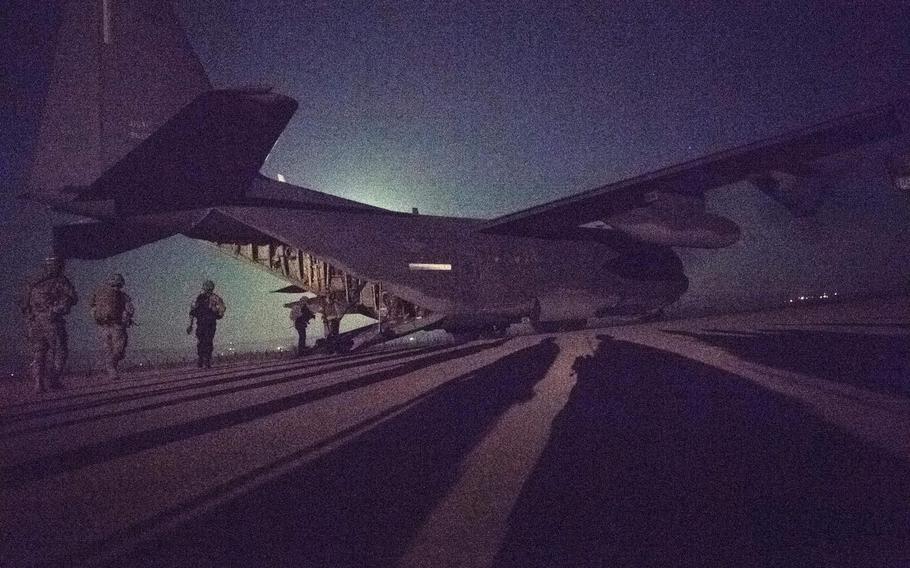 KABUL, Afghanistan — U.S. and Afghan special operations are preparing an offensive against Islamic State enclaves in northwestern Afghanistan, where the group has gained a foothold despite an intensive allied effort to destroy it.

Since early last year, when the U.S. State Department designated the regional ISIS branch a terrorist organization, U.S. troops have aided Afghan forces battling the Islamic State-Khorasan Province, or ISIS-K, mainly in eastern Afghanistan, where it sprouted in 2015.

Operations against a budding ISIS-K group in the northwest could begin as soon as this week, said Gen. Mohammad Radmanish, deputy spokesman for the Afghan Defense Ministry.

“These operations are to chase the enemy — the terrorists who oppose the Afghan people and the Afghan National Defense Security Forces,” he said.

The campaign comes as reports indicate ISIS veterans could be filtering into northern Afghanistan from Iraq and Syria as the group’s grasp on that region slips.

U.S. officials have maintained that battle-hardened ISIS fighters haven’t made their way into Afghanistan, but a report on Sunday by the Agence France-Presse news agency cast doubt on whether that’s still the case.

Citing local officials, AFP reported that an unknown number of Algerian and French nationals, along with Chechens and Uzbeks, entered ISIS-held territory in Afghanistan’s northwestern Jowzjan province last month. At least three of them are believed to have fought in Iraq and Syria.

Even before the latest report, U.S. troops and their Afghan counterparts were expected to launch efforts to destroy ISIS-K “where they have appeared in Jowzjan and Faryab” provinces, Gen. John Nicholson, the top U.S. commander in Afghanistan, told Pentagon reporters in late November. He said then it was a matter of days.

“Our work is critical to extending the access and reach to fight our adversaries in their safe havens,” one unnamed Special Tactics airman said in the release.

Since early 2016, over a dozen ISIS leaders and thousands of its fighters have been killed. This year, officials vowed to totally eradicate the group, which has carried out several devastating attacks in the Afghan capital.

“We’re committed to their destruction wherever they appear across the country,” Nicholson said.

Much of that fight so far has been in eastern Nangarhar province, where more than one-third of the 21 U.S. combat deaths in the country since January 2016 have occurred.

Since March, the U.S. has conducted more than 1,400 ground operations and strikes against ISIS-K, killing over 1,600 fighters and destroying over 600 of the group’s structures and fighting positions, Nicholson said.

One of the most high-profile strikes came in April, when an Air Force MC-130 dropped a Massive Ordnance Air Blast bomb, known as “the mother of all bombs,” on a cave network in Nangarhar province. Officials said it killed nearly 100 ISIS-K fighters.

The constant military pressure has kept ISIS-K from establishing a caliphate in the country, officials said. The group is mainly composed mainly of militants from Tehrik-i-Taliban Pakistan. They swapped allegiances, enticed partly by the prospect of better pay supported by funding from the main ISIS group in the Middle East, officials have said.

They’re now largely cut off from their outside funding, Nicholson said last month, and “they’re having trouble replacing their leaders.”

Fighters were not migrating from Iraq and Syria, Nicholson said, “because they know if they come here, they will face death.”

Earlier this year, ISIS-K was thought to have only a few hundred fighters, down from a high of up to 3,000, but officials now say around 1,100 fighters are operating throughout the country. About 300 are believed to be operating in Kunar and Jowzjan provinces, Faulkner said.

Radmanish, the Afghan defense ministry spokesman, said the anticipated operations were planned in response to reports that ISIS-K fighters were attempting to expand.

Faulkner declined to comment on ongoing operations, including those in Faryab and Jowzjan, out of concern for operational security. Both provinces have seen relatively few coalition fatalities in the past 16 years, with no reported U.S. combat deaths in Faryab province for five years — 10 in Jowzjan — according to a database maintained by the website iCasualties.org.

Nicholson has said all six of Afghanistan’s military corps, as well as its special operations unit, have been simultaneously on the offensive this year. U.S. forces have also been more aggressively striking the Taliban in the country’s south in recent weeks.

One unnamed Special Tactics airman assessing Faryab province’s airfields in preparation for increased airpower against ISIS-K there, on his fifth deployment, said he sensed a shift in the fight.

“You can feel the difference this year,” he said. “A new commitment to extending the fight to the heart of the enemy.”