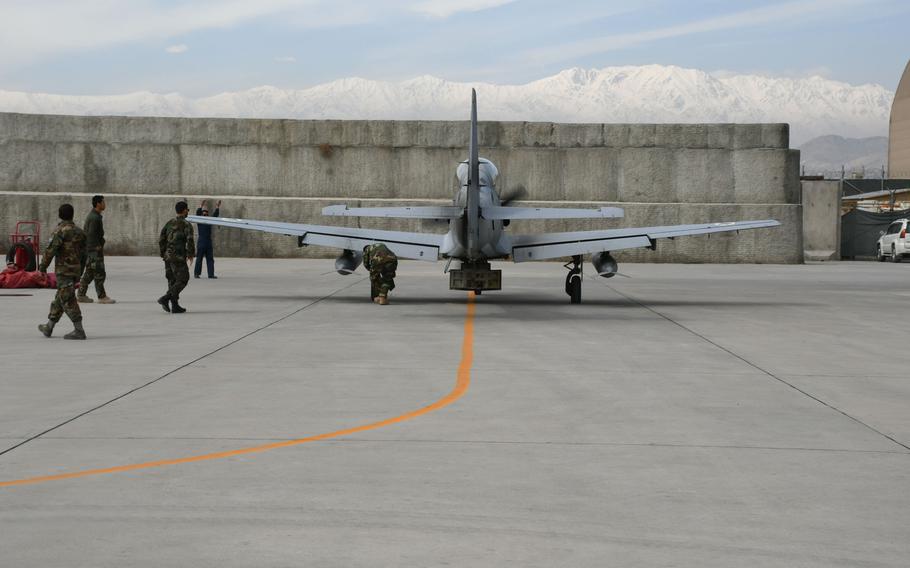 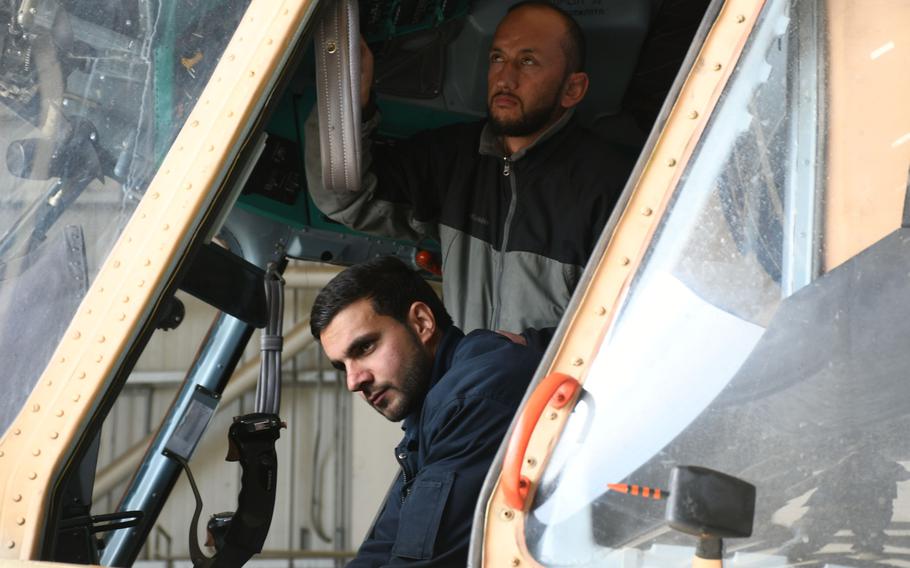 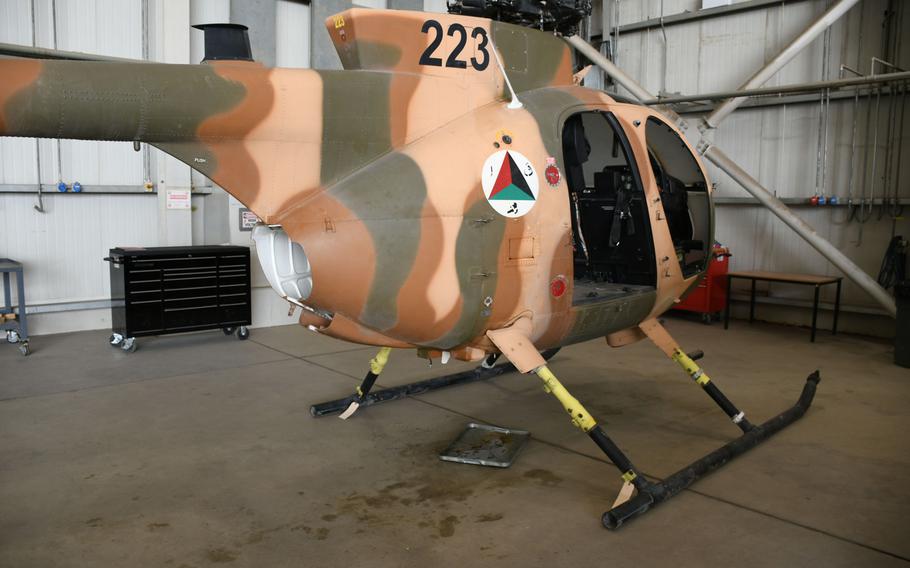 Buy Photo
An MD-530 helicopter sits in a hangar at Hamid Karzai International Airport in Kabul on Tuesday, March 6, 2018, after being damaged by small arms fire in February. (Phillip W. Wellman/Stars and Stripes) 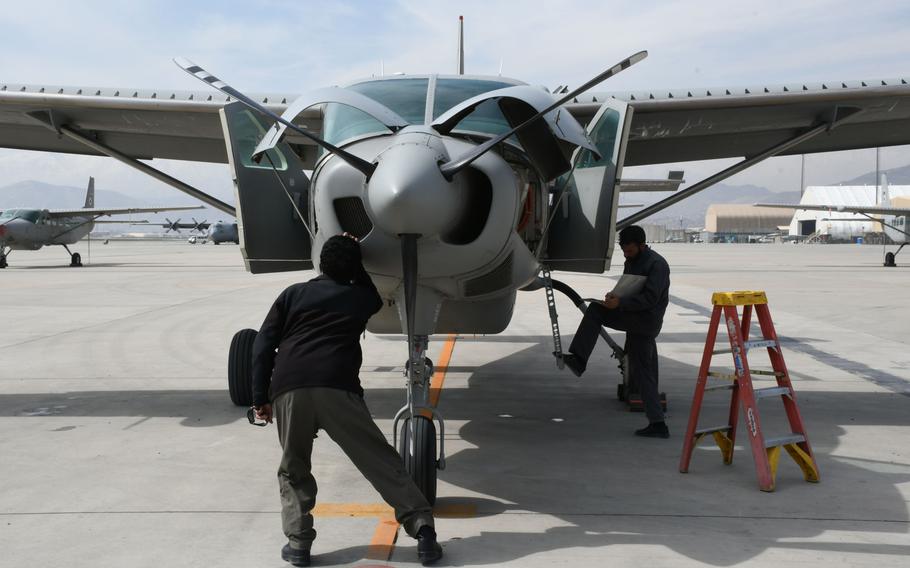 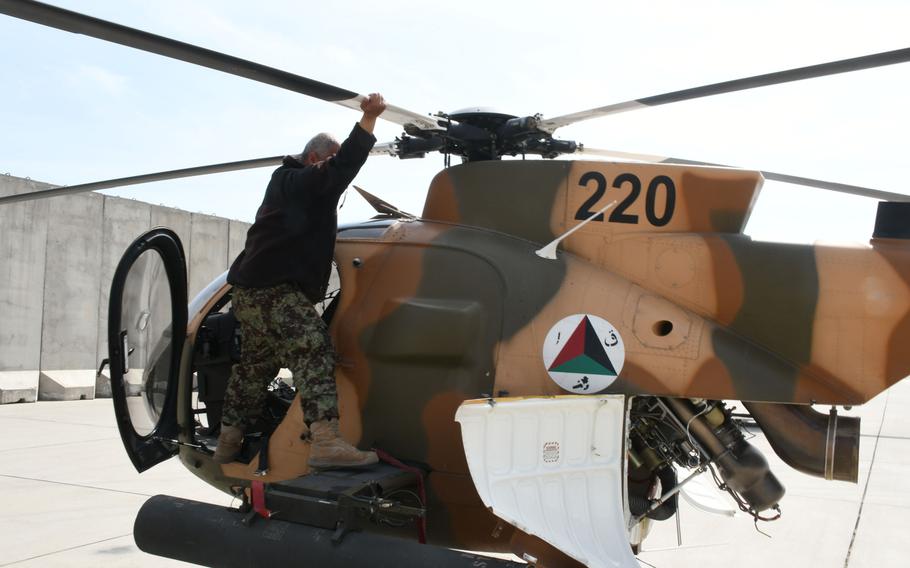 KABUL, Afghanistan — During an operation against insurgents last month in the rural, northern province of Takhar, an Afghan air force MD-530 helicopter was hit by ground fire and forced to make an emergency landing.

Although no one was injured, the tiny aircraft had taken a round through the fuselage and one of its skids were hit.

With the enemy active around them, Afghan troops secured the area, called in maintenance experts from Kabul and waited.

At night, they moved the MD-530 to the nearest base — at one point, lifting it by hand over a creek. The maintenance crew there deemed the aircraft inoperable and send it back to Kabul in a cargo plane for repairs.

The rescue operation, executed by Afghan air force maintenance experts and carried out entirely by Afghan servicemembers, was heralded as a resounding success. It underscored the importance of training local maintainers to a level where they can perform vital tasks that will allow the military to one day function without foreign support.

However, U.S. advisers acknowledge that Afghan self-sufficiency is still years away, amid criticism from Washington that coalition forces haven’t been doing enough in recent years.

In January, a Defense Department Inspector General report said the Afghan air force was too dependent on foreign contractors, noting that contractors were responsible for 80 percent of all maintenance work, while Afghans conducted just 20 percent.

The contracts “limit the progressive transfer of maintenance responsibilities to Afghan air force maintainers,” the report said. It further criticized the contracts for not including timelines for transitioning maintenance work to local forces.

Foreigners are unable to travel to most places in Afghanistan because of security concerns, so when incidents occur in remote areas, only Afghan crews can be dispatched.

If there’s an insufficient number of trained Afghan mechanics, damaged aircraft have to be destroyed on the battlefield, officials said.

“If you get to the point where you have a cadre of trained and qualified Afghan maintainers, then you can send groups of those guys to different places and keep the aircraft out in the fight longer, as you won’t have to bring them back to a main operating base to be serviced or inspected,” said Air Force Maj. Gerrard Carisio, commander of the 440th Air Expeditionary Advisory Squadron, which focuses on maintenance.

Carisio, who said the IG report provided an “inaccurate representation” of events on the ground, added that U.S. and coalition forces have been working for months to transition maintenance responsibility to Afghans, with the eventual goal of flipping the 80 percent to 20 percent ratio.

Afghanistan’s air force dates to the 1920s, and reached its zenith during the 1980s Soviet occupation with nearly 500 fighter planes and bombers, transport aircraft and helicopter gunships.

But it became little more than a scrap heap, left to decay by the Taliban during the civil war that followed the Soviet withdrawal, then destroyed on the ground by U.S. bombing in 2001.

When the air force was reborn in 2005, thousands of specialists had to be recruited and trained.

Initial priority was put on training Afghan pilots, which takes three to four years. But training a maintainer takes five to seven years.

English proficiency, which is necessary to read technical manuals, is one of the biggest hurdles, advisers say.

“Of all the things that we do across the entire TAAC-Air, growing a maintainer is by far the hardest,” said Air Force Brig. Gen. Phillip A. Stewart of NATO’s Train Advise Assist Command—Air.

An additional hurdle is that the planes being used for training are also being used to fight insurgents.

“We could train maintainers a lot faster if we didn’t fly any combat,” Stewart said. “If we had those planes and they sat there all day, we could probably train ten times as many, but that’s not the point.”

Plans are underway to almost triple the size of the air force’s inventory of aircraft, and to add 3,000 Afghan airmen, boosting the total to 11,000.

During a warm afternoon on the flight line in Kabul earlier this month, Capt. Abdali, deputy commander for maintenance of the A-29 Super Tucano light attack turbo-prop, said his countrymen were ready to start taking most of the maintenance work into their own hands.

“We’re capable to maintain what’s going on,” said Abdali, who like many Afghans only uses one name.

Getting Afghan maintainers to learn to service new airframes like the A-29 and MD-530 is expected to take three to five more years, Carisio said. But he expects more success stories like the one in Takhar.

“As we make the transition, I think that you will see an expansion of capabilities even in the upcoming fighting season,” Carisio said.