US advisers in Iraq settle into life, daily work as part of Inherent Resolve 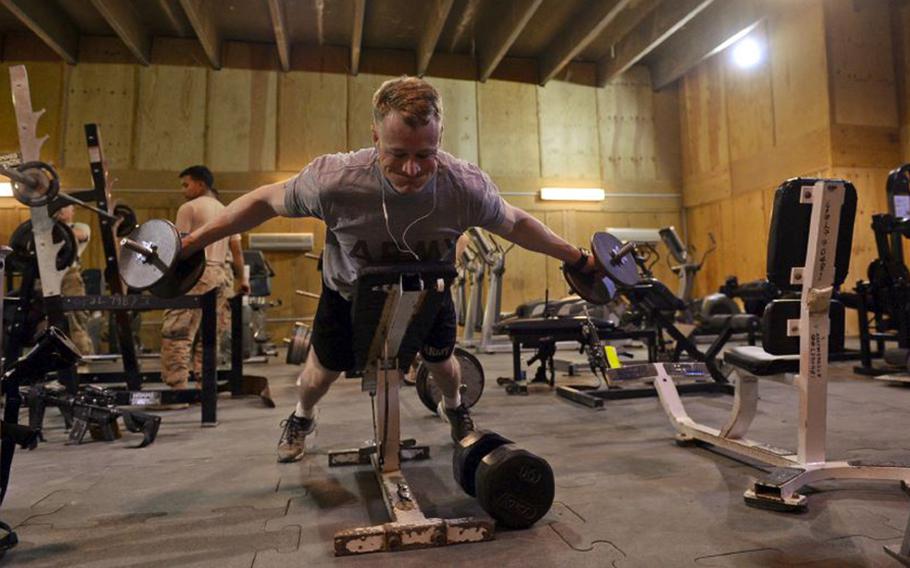 U.S. Army Spc. Ryan Bussell works out at the gym at the coalition base in Besmaya, Iraq. Like many structures at the base, the building used as a gym and recreation center dates from the last U.S. presence here before 2011. (Josh Smith/Stars and Stripes)

Many of the familiar-looking wooden huts and concrete blast walls are left over from the last U.S. units that occupied this base before all American troops were withdrawn in 2011.

The first new troops arrived here at the beginning of the year. The Army won’t say exactly how many of its soldiers man this particular training camp, officially designated the “Building Partner Capacity site,” but the U.S.-led coalition says it has roughly 1,000 trainers at four such bases around Iraq.

An advance team scouted the site late last year to determine what needed to be revamped for the new American presence and, according to officials at the camp, the conclusion was not much.

“There is really very little different now,” said Sgt. 1st Class Frank Batts, who routinely visited the Besmaya base while his unit was deployed in the area in 2010.

The camp boasts a large gym and a dining facility that most deployed soldiers would likely consider above average. Contractors in bow ties slice fresh tropical fruit and serve American and international troops a range of dishes. A recreation facility is still largely empty, with equipment just starting to arrive.

“I can’t complain at all,” said Sgt. Brandon Roberts, who is one of many soldiers on their first deployment. “There’s good food, and we’re working hard. Nothing to complain about.”

One downside to this particular base is that, according to soldiers, it doesn’t have a post exchange, and mail can take more than a month to arrive. So troops who make runs to better stocked bases in Iraq often return better supplied.

It was at this site in March that the first U.S. soldier was injured by ground fire since the coalition began training Iraqis. The soldier was slightly wounded in the face when an unknown gunman fired from outside the base.

At Besmaya, the coalition camp is located in close proximity to the Iraqi soldiers with whom the advisers work. Unlike in Afghanistan, where the international training efforts have been marred by deadly insider attacks by Afghan forces, that threat hasn’t significantly affected daily work for foreign troops here.

“We have a security posture that would prevent [an insider attack] from occurring, but we’ve never seen any indications that there would be an attack,” said 2nd Lt. Rebecca Tummers, an intelligence officer at the base. “It’s not something we consider a high threat in this area.”

That was an assessment echoed by other American soldiers, who said they’ve had nothing but good relationships with the Iraqi forces.

“The platoon that I work with has a pretty decent bond, and they want to joke with me as soon as I show up,” said Sgt. Cody Sorrell. “It got to the point where I knew when they needed a break or when I should push harder.”

Maj. J.D. Pritchett went further in describing his daily work with the Iraqis: “We would call them friends.”