US adjusting tactics to intensify air war against Islamic State 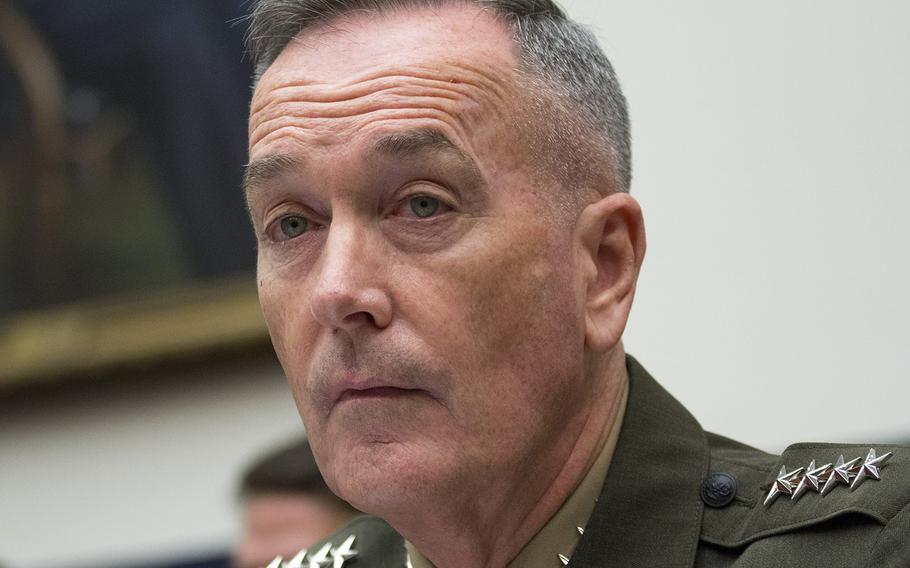 WASHINGTON – The United States will adjust its tactics and risk more civilian casualties when launching airstrikes against high-value targets in Syria and Iraq as part of an effort to increase pressure on Islamic State militants.

The tactical adjustments reflect an intensified effort to cut off Islamic State militants from their ability to fund attacks or move fighters across the battlefield, Gen. Joe Dunford, chairman of the Joint Chiefs of Staff, told lawmakers on Tuesday.

“Our threshold for collateral damage increases with the value of the target,” he said.

Since the United States launched Operation Inherent Resolve against the Islamic State group in August 2014, U.S. and coalition forces have conducted more than 8,200 airstrikes against Islamic State targets, according to Department of Defense data.

But the air campaign has been criticized for being too constricted in its rules of engagement. Critics have said it has allowed Islamic State militants to continue to hold ground and launch attacks, due to U.S. and coalition guidelines to avoid targets where there could be civilian casualties.

During testimony before the House Armed Services Committee on Tuesday, Dunford was asked by Rep. Martha McSally, R-Ariz., a former A-10 Thunderbolt II pilot who flew missions in Afghanistan from 2005 to 2006, whether changes to the tactics would “unleash and unshackle American airpower and not just be in this limited, impotent mindset?”

McSally asked why, in recent airstrikes against Islamic State fuel trucks, did C-130 gunships and A-10 attack aircraft provide warnings by flying low over the trucks and dropping leaflets alerting the drivers to run away before firing at them.

“If you’re driving a truck for a terrorist organization that’s fueling them, you are a combatant,” McSally said.

Dunford said the United States did not see the drivers as combatants.

“We assessed a majority of the truck drivers were just people trying to make a living in the region. It’s a little bit different than enemy combatant from our perspective,” he said. “I don’t think in this fight we should apologize for bringing our values to the fight. I don’t think we should be killing innocent people, which would merely feed the narrative of [the Islamic State.]”

But Dunford said the restrictions now will loosen, depending on the target.

On Tuesday, a senior defense official who spoke on the condition of anonymity because he was not permitted to comment told Stars and Stripes that shifting to a posture in which civilian casualties might be tolerated when firing at a high-value target is a change in tactics in the campaign against the Islamic State group. However, he said it is not a change in their rules of engagement, which continue to be driven by the principle to minimize civilian casualties.

If the United States does not further expand its target set, or loosen its rules of engagement, even intensified airstrikes will be ineffective, said retired Navy Cmdr. Chris Harmer, an analyst at the Institute for the Study of War.

U.S. and coalition pilots “are operating under the restrictions placed on them by policymakers,” Harmer said. The campaign “either needs to expand the target sets or significantly relax the [rules of engagement] so we can hit these targets.”

The fuel convoys were only recently added to the target list, Secretary of Defense Ash Carter said, after United States intelligence revealed how important they are in funding the Islamic State.

“We are loath to strike those because we are going to hit civilians,” Harmer said. “If the counter argument is we cannot hit civilian casualties, there is no way we can hit the Islamic State because they are intermingled.”

In the wake of the Islamic State attacks in Paris, Carter said in an interview with MSNBC that the Pentagon was reviewing its rules of engagement, too, and is prepared to change them.

“We’re prepared to change the rules of engagement,” Carter said in the Nov. 19 interview. “We’ve changed tactics, as we just did in the case of the fuel trucks.”

On Tuesday, Carter, who testified with Dunford, said the fuel truck strikes were a significant expansion on U.S. airstrikes against Islamic State infrastructure.

Carter’s and Dunford’s comments came as both men outlined an intensified ground campaign against the Islamic State. Carter said the United States will send special operators into battle with Iraqi and Kurdish forces against Islamic State militants as part of a stepped-up war effort ordered by the White House.

Gen. Mark Welsh, chief of staff of the Air Force, said he has regularly discussed the rules of engagement against the Islamic State with Carter, though he did not provide details.

“We have very good conversations and there’s no restrictions,” Welsh said Tuesday at an Atlantic Council discussion, noting the focus of how to increase U.S. air pressure on the Islamic State is driven by Lt. Gen. Charles Brown, commander of Air Force Central Command.

“[Brown] is constantly looking at new ways to put more pressure on the enemy,” Welsh said. “Over the last month that pressure has been slowly increased.”