US A-10s arrive in Estonia for 6-month rotation 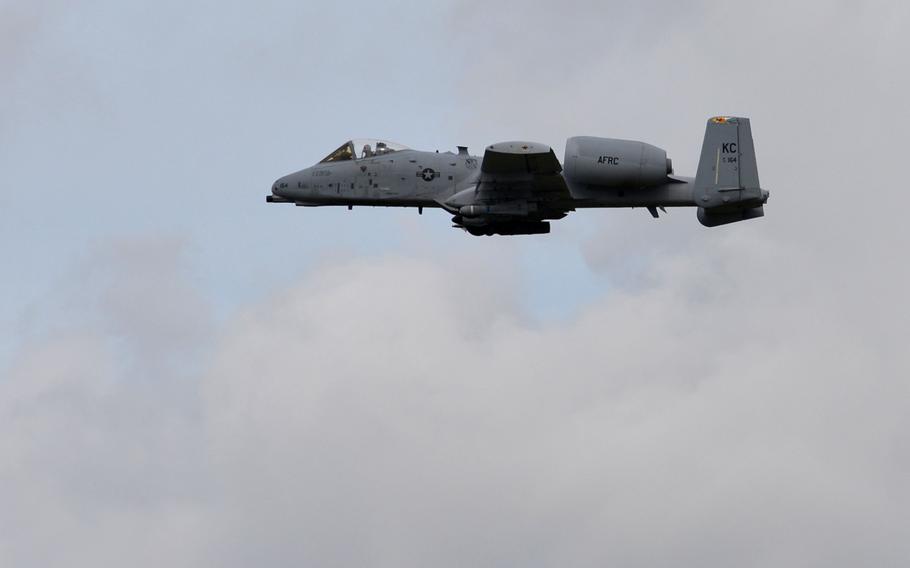 Buy Photo
An Air Reserve A-10 Thunderbolt II flies over Amari Air Base, Estonia, earlier this month. The base is hosting a new batch of A-10s from the States with the arrival Monday, Sept. 22, 2015, of 12 A-10s and about 300 airmen from Moody Air Force Base, Ga. The aircraft and personnel will spend about the next six months in Europe flying with NATO allies and European partners as part of a long-term deployment intended to deter Russian aggression and promote regional security. (Jennifer H. Svan/Stars and Stripes)

KAISERSLAUTERN, Germany — Twelve A-10s arrived Monday at Amari Air Base in Estonia, the first stop in a deployment to Europe that’s expected to last about six months, the Air Force said Tuesday.

The deployment marks the second time the Warthogs have been sent to Europe as part of a so-called theater security package. Since February, the Pentagon has deployed three of these large groupings of aircraft and personnel to Europe for six-month missions in response to the continuing crisis in eastern Europe over Russia’s hostile actions in Ukraine. The first theater security package was also comprised of A-10 Thunderbolt IIs, which deployed to Spangdahlem Air Base in Germany and returned to Davis-Monthan Air Force Base, Ariz., last month.

Second in the rotation were Florida- and Oregon-based Air National Guard F-15Cs, which arrived in Europe in April.

The Estonia-bound A-10s deployed with about 300 airmen from the 23rd Wing at Moody Air Force Base, Ga. The unit will be called the 74th Expeditionary Fighter Squadron while overseas, where it’s expected to train with NATO allies and European partners while demonstrating U.S. commitment to regional security, officials have said.

Amari, meanwhile, is becoming a busier hub. Funding assistance from NATO and the United States has allowed Estonia over the last few years to rebuild the former Soviet installation into a fully operational base that meets NATO standards.

The air base recently finished hosting Air Reserve A-10s from Missouri, which were in the Baltic state for a much shorter deployment in support of Operation Atlantic Resolve, the U.S. response to the Ukraine crisis. In early September, two F-22 Raptors landed at Amari for the first time to demonstrate the base’s capability to receive fifth-generation fighter aircraft.

A-10s were based at Spangdahlem from 1994 until 2013, when the last jets returned to the U.S. as part of Air Force budget cuts and force downsizing across Europe.