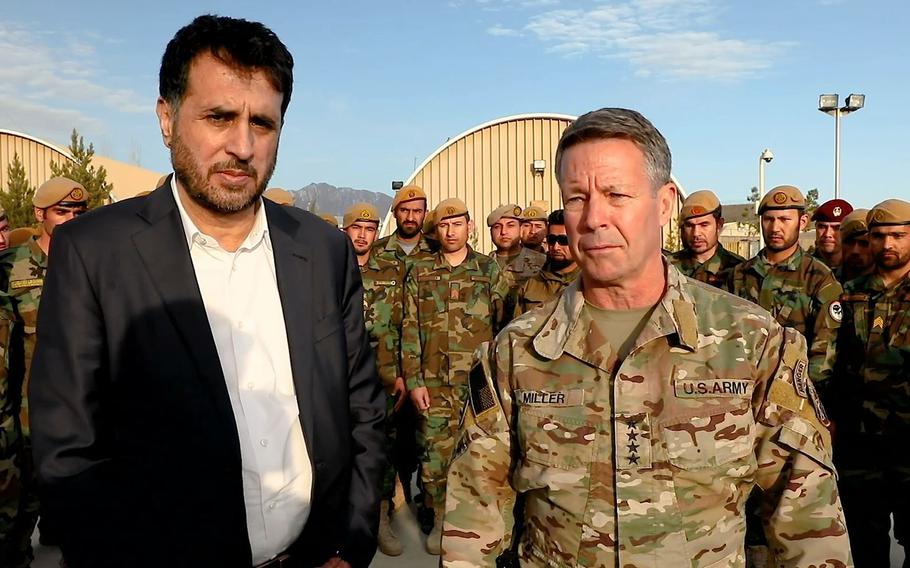 Buy Photo
Gen. Scott Miller, the top American commander in Afghanistan, right, and Afghan Defense Minister Asadullah Khalid visit a military base in southern Kandahar province on Tuesday, Feb. 26, 2020, where they said a weeklong period of reduced violence across the country had been successful so far. (Brian Ferguson/Stars and Stripes)

KABUL, Afghanistan — Peace talks between the Taliban and the Kabul government could ease tensions over a drawn-out election drama in Afghanistan, where, after nearly two decades of U.S.-led war and reconstruction efforts, a stable democracy has yet to take shape.

The talks are expected to be part of a broader deal after the end of a weeklong partial cease-fire meant to test the Taliban’s ability to curtail violence in the country, which U.S. officials said was on track as it reached its midpoint Tuesday.

“We’re seeing what we would call a downward trend in violence,” said Gen. Scott Miller, the top American commander in Afghanistan, in a video distributed by the military Tuesday evening.

If the “reduction in violence” agreement proves successful, the U.S. plans to sign a deal with the Taliban on Saturday that opens the way for intra-Afghan talks. Until now, the Taliban has refused to negotiate with the Kabul government.

Those negotiations could defuse the tensions that have followed a presidential election process marred by technical problems and allegations of fraud. Incumbent President Ashraf Ghani was declared the winner earlier this month, five months after the voting took place. The result spurred his main rival, Abdullah Abdullah, to say he would form a parallel government.

Negotiations between Kabul and the insurgents could lead to a change in the government anyway, which analysts say makes a major confrontation between Ghani and Abdullah less likely.

“There’s just as good of a chance that the peace process winds up serving as an exit ramp to de-escalate tensions over the election results,” said Andrew Watkins, a senior Afghanistan analyst at International Crisis Group.

A unified government that includes Ghani and Abdullah, who has served in the country’s No. 2 executive position following an agreement after the 2014 election, would mean a better bargaining position with the Taliban, said Johnny Walsh, a senior expert on Afghanistan at the U.S. Institute of Peace.

“At the same time, if that kind of unity is not possible, it doesn’t mean that negotiations are doomed, it just means that negotiations will be different,” Walsh said, adding that it would mean more sides at the table.

A peace deal between the U.S. and the Taliban likely would mean a gradual drawdown of American forces from Afghanistan in exchange for assurances by the Taliban to prevent terrorists from using the country to stage attacks against the U.S. and its allies.

A timeline for the U.S. withdrawal hasn’t been announced. However, during a visit to India this week, President Donald Trump said the roughly 13,000 U.S. troops deployed to Afghanistan initially would be reduced to 8,600 before decisions on further reductions are made.