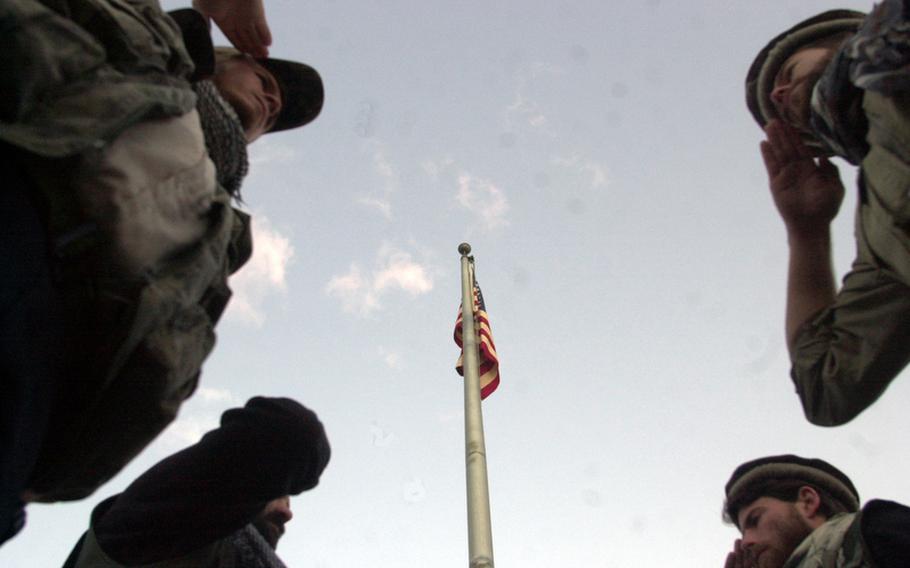 A contingent of 5th Special Forces Group soldiers pay their final respects to fallen friends and comrades in a private solemn ceremony at the U.S. Embassy before turning the compound over to Marine guards in Dec. 2001. (Jon R. Anderson/Stars and Stripes)

A contingent of 5th Special Forces Group soldiers pay their final respects to fallen friends and comrades in a private solemn ceremony at the U.S. Embassy before turning the compound over to Marine guards in Dec. 2001. (Jon R. Anderson/Stars and Stripes) 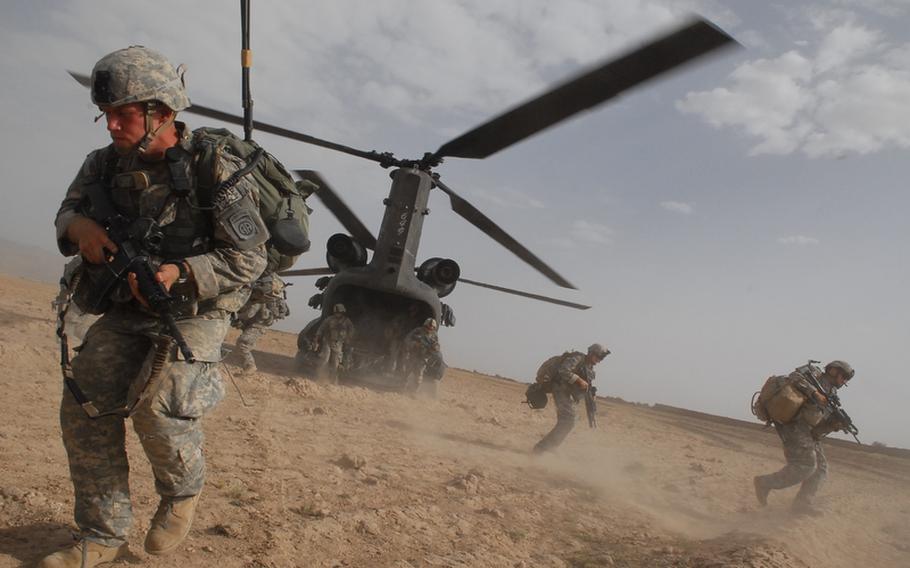 Spc. Colin Hankinson, 20, of Richardson, Texas, left foreground, hustles from the belly of a Chinook helicopter during a recent air assault in Zabul Province, Afghanistan. (Monte Morin/Stars and Stripes) 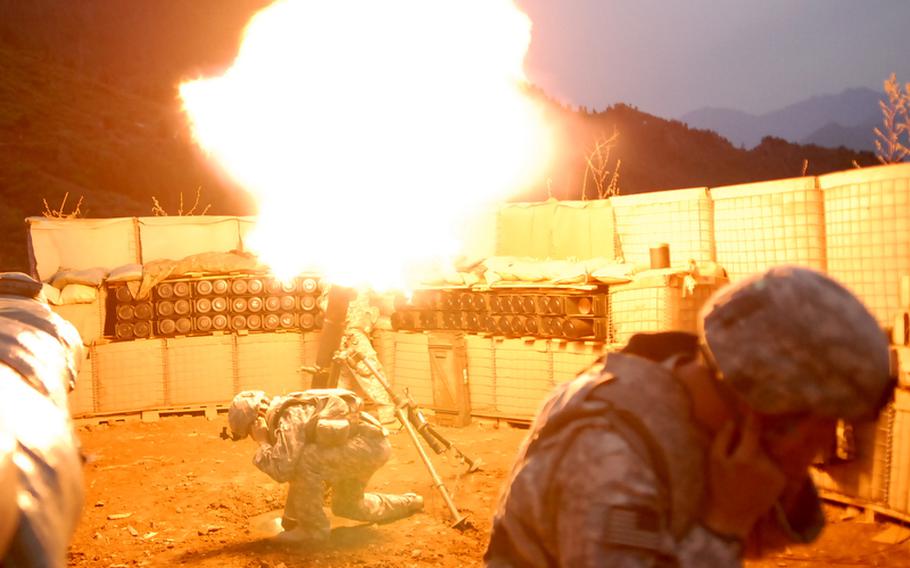 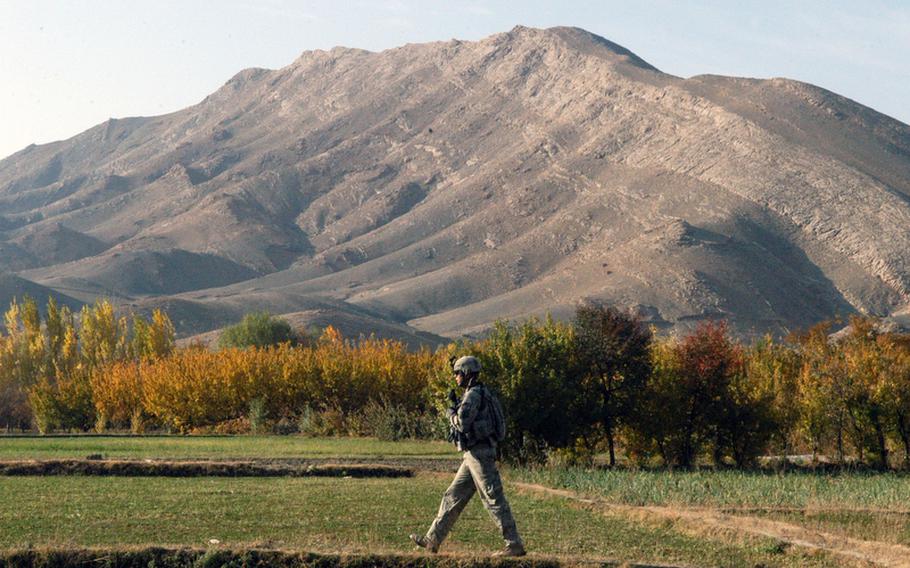 A soldier with 3rd Platoon, Company A, 2nd Battalion, 87th Infantry Regiment moves toward the site of a roadside bomb in the Tangi valley. (Geoff Ziezulewicz/Stars and Stripes) 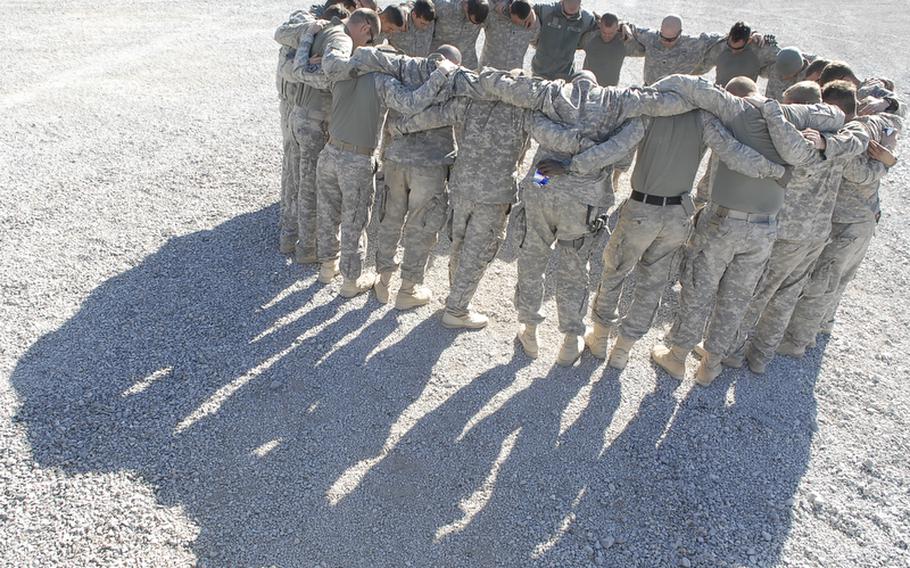 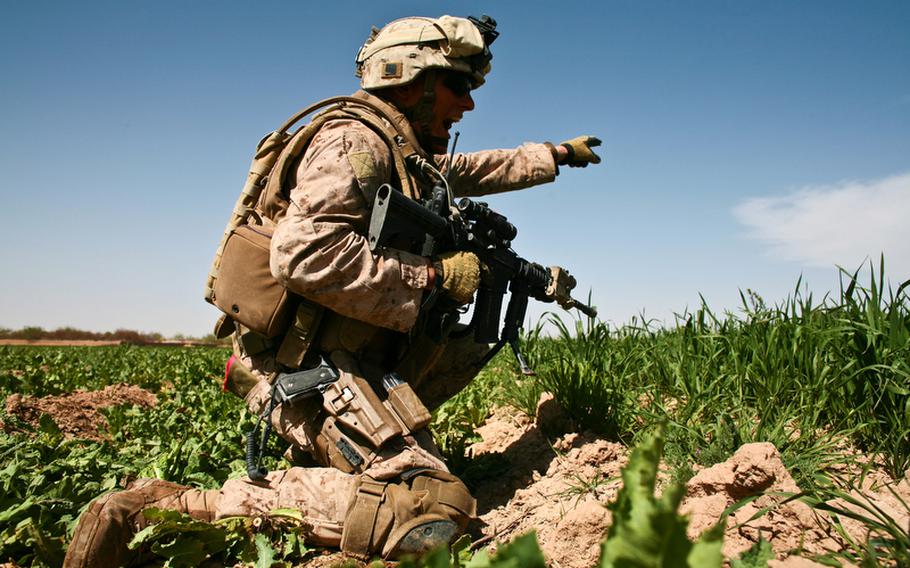 Staff Sgt. Christopher Whitman, 28, of Clearwater, Fla., points out the location of the Taliban position and yells for his men to start firing. March 11, 2010. (Stars and Stripes) 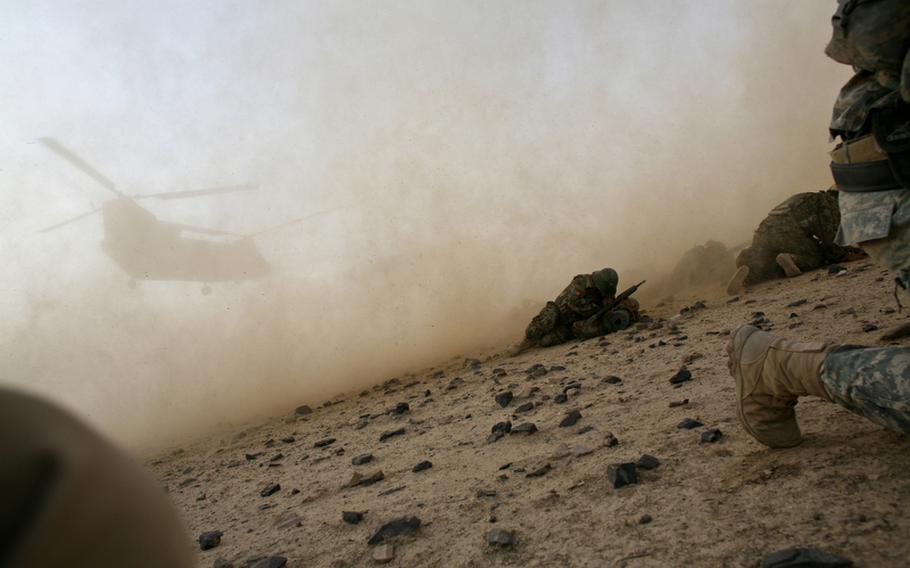 U.S. soldiers with Company C, 2nd Battalion, 508th Parachute Infantry Regiment and Afghan troops hug the ground as a CH-47 Chinook helicopter kicks up dust and rocks. It was lifting off outside the village of Shuyene Wusa, as part of a recent clearing operation in the Arghandab River valley, Kandahar province, Afghanistan. (Drew Brown/Stars and Stripes) 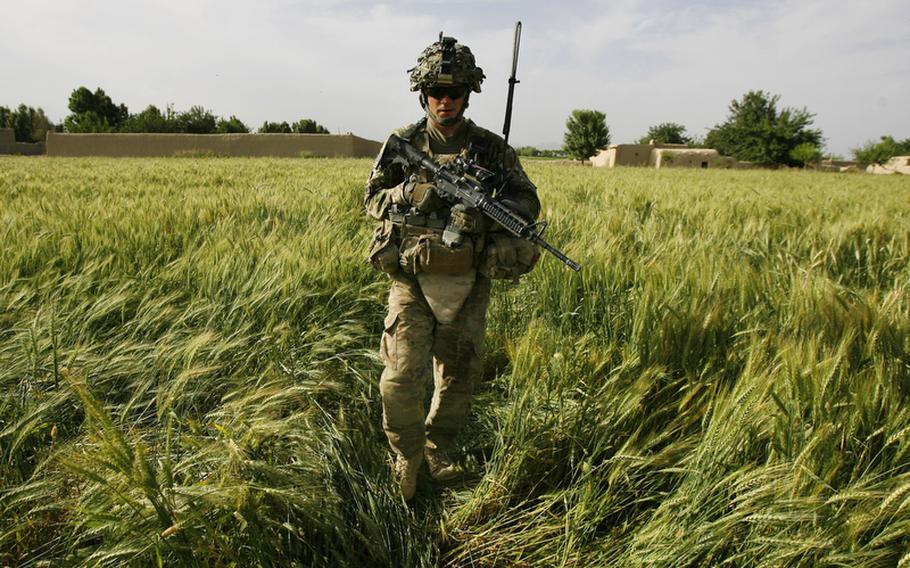 Sgt. Blaine Zimmerman walks through a wheat field during a mission near Strong Point Dennis at Combat Outpost Nalgham, on May , 2011. (Laura Rauch/Stars and Stripes)

Monday marks 12 years since the U.S. invaded Afghanistan, and for a conflict that’s been seemingly forgotten by most Americans who’ve grown weary of war, it seems fitting that the anniversary should be overshadowed by a domestic story: the federal government shutdown.

More than a decade since the U.S. launched Operation Enduring Freedom on Oct. 7, 2001, there are still 54,000 American troops in Afghanistan. That is more, by far, than at any time during the first seven years of the war, yet these days, they garner scant news coverage. Most recently, Syria’s civil war and the use of chemical weapons as well as the federal government shutdown have buried Afghanistan news, even as Americans continue to die — four were killed within a week in so-called insider attacks just at the end of September.

“There is a bloody war happening, and no one is talking about it,” said Ahmad Majidyar, an Afghanistan expert at the American Enterprise Institute and a frequent adviser to the U.S. Army.

The U.S. role is diminishing and casualties among members of the U.S.-led international coalition are down as the Afghan security forces take over more of the fighting. But Americans are still fighting — and dying.

With nearly three months left in 2013, at least 102 U.S. troops had died in Afghanistan as of Oct. 1, according to The Associted Press — more than during any of the first six years of the war. The military is whittling forces down to approximately 34,000 by February and the number of coalition bases has gone from a high of 800 to about 100 now. But combat troops will be there for another 15 months, so we are likely still a long way from the last U.S. casualty in Afghanistan.

Following the Sept. 11 terrorist attacks, the U.S. sent in a small force heavily reliant on special forces able to quickly knock out the Taliban, who had sheltered the al-Qaida terrorists responsible for the attacks. But Osama Bin Laden escaped, along with many other al-Qaida leaders, and it would be nearly 10 years before the U.S. tracked him down, hiding in a safe house in neighboring Pakistan.

After several years of relative calm following then-President George W. Bush’s declaration of victory in Afghanistan in 2004 — a time when international troops were supporting nation-building efforts, and U.S. and world attention was focused on the continuing war in Iraq — the Taliban regrouped. They mounted a violent and effective guerrilla campaign that eventually pushed President Barack Obama to increase troop levels, sending a “surge” of 30,000 additional troops to the country in 2009.

Despite the surge, though, the Taliban remain entrenched, inflicting heavy casualties on Afghan forces — who have largely taken over security responsibilities from coalition forces — with little more than a year to go before all international troops are scheduled to leave.

Afghanistan is a topic seldom mentioned by the White House, and with public support for the military mission there having crumbled in the past few years, it’s easy to see why.

“President Obama talks about Afghanistan strategy maybe only once in a year,” Majidyar said. “When he does talk about it, he talks about the end of the war and talks only of positive things.”

A White House spokesman declined to discuss whether Obama is avoiding public discussion of Afghanistan, instead issuing a statement about negotiations over a bilateral security agreement to keep American troops in Afghanistan past the end of 2014.

Media interest in the war has been waning for years, driven by Obama’s silence on the issue since the end of his troop surge, said A. Trevor Thrall, a professor at George Mason University and the author of War in the Media Age, which explores the intersection of the military, media and public opinion in conflicts since the Vietnam War. Thrall said it isn’t the first time a president has tried to bury news about Afghanistan.

“Bush stopped talking about Afghanistan almost immediately after he shifted focus to Iraq,” he said. “Afghanistan was truly a forgotten war (when) Obama took over and it became it again after the surge was over. The result is the public really has no idea what’s going on there.”

In 2010, during the surge, it was hard for a reporter to find a cot at Kandahar Airfield in southern Afghanistan, with journalists from around the world packed tightly into a tent that served as a media center, even battling over access to electrical outlets. Now, it’s rare that embedded reporters even need to share a room at a major base.

The new challenge is getting approval to embed with troops at all, as the U.S.-led coalition has made it much more difficult, largely cutting off access to international troops on the battlefield at a crucial moment when NATO is handing more responsibility to Afghan forces.

U.S. Army Chief of Staff Gen. Ray Odierno, the former top military commander in Iraq, said the lack of public awareness worries him because international engagement is key to sustaining gains made in Afghanistan.

“If we continue on this [current military] path, I think Afghanistan can become a success story, and I worry that’s not being talked about at all,” he said.

Afghanistan was considered the “good war” with the just cause, the one everyone could get behind. With its clear links to the 9/11 attacks, as opposed to Iraq’s, based as it was later learned on faulty intelligence, the war in Afghanistan was much more popular at first, Majidyar said. Because of this, though, it also never generated the attention — or the outrage — of the Iraq war, which led to worldwide protests and heated debates of a kind never seen in relation to Afghanistan.

But now, many see Afghanistan as the foreign policy guest that has long overstayed its welcome.

America and its Western allies have gone from war fatigue to numbness.

There’s a “sense of exhaustion” among long-time Afghan hands in aid organizations and foreign service positions, who are often “tired and, in some cases, deeply fed up” with the situation in Afghanistan, said Graeme Smith, the International Crisis Group’s senior analyst in Afghanistan and author of “The Dogs Are Eating Them Now: Our War in Afghanistan.”

Public ambivalence about Afghanistan stems in part from the failures of the past few years, which, despite the surge of foreign troops, saw a sharp rise in casualties; violence remained above the pre-surge levels after the additional forces left, Smith said.

“The short attention span of the West is such that if the problem hasn’t been solved by now, maybe they figure it’s unsolvable, which is too bad because I think what Afghanistan needs right now is continued engagement,” Smith said. “In a lot of ways, a lot of Afghanistan’s future depends on whether Western nations feel guilty enough about the mess they made to stay involved.”

Smith, who, as a reporter with the Toronto Globe and Mail was the only Western reporter living in the violent southern city of Kandahar, said the relative calm seen today in that city, the Taliban’s spiritual homeland, shows the stakes of continued international involvement and the fragile state of military gains.

Right now, the Afghan military and local militias, known as Afghan Local Police, have the city and surrounding area fairly secure, but the salaries for those fighters are paid for entirely by foreign funds. Smith said that recently, some local commanders have complained that they haven’t been getting paid.

“Some of the [Afghan Local Police] are just Taliban, who have been recruited to the government side, and if they don’t get paid, they can easily go back to the Taliban overnight.”

Troops still serving in Afghanistan have mixed feelings about the lack of attention.

“It’s kind of sad, because I think some people are a little more occupied with the latest TV show,” said Lt. Uriel Macias, a Navy reservist assigned to a stability operations team in Kabul. “But what is often forgotten is that we are still losing people all the time.”

Army Staff Sgt. Mike Toole, a member of III Corps based in Kabul, said he understands the dwindling interest back home.