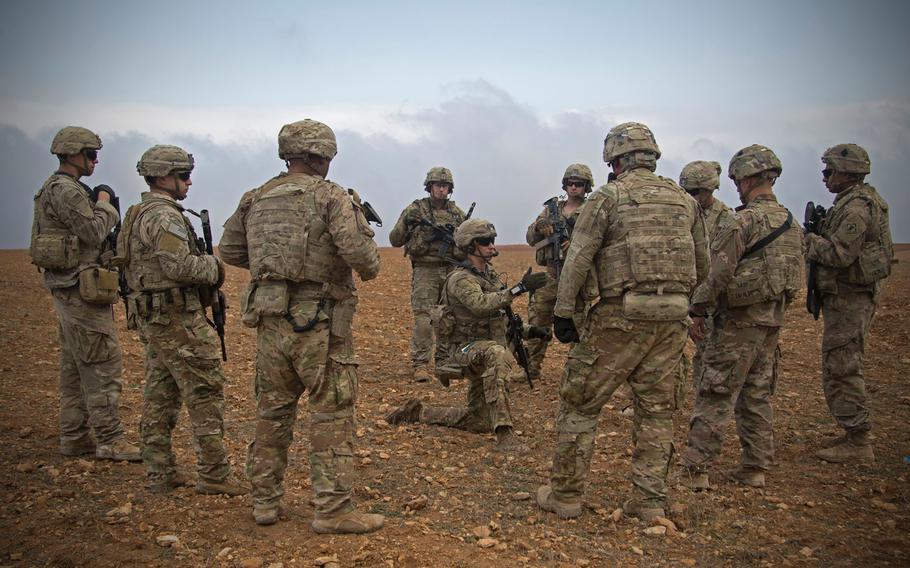 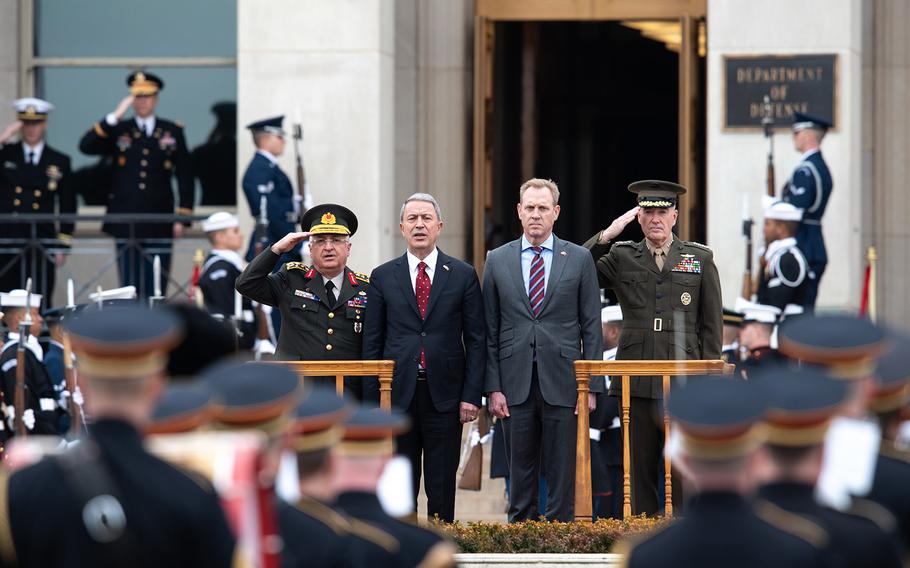 WASHINGTON — The White House will leave some 200 U.S. troops in Syria after other servicemembers withdraw in the coming months, a policy reversal that comes two months after President Donald Trump ordered troops out of the country and claimed victory over the Islamic State.

The remaining U.S. troops will assist local forces with security once ISIS is cleared from the small plot of land that they still control in what is left of their so-called caliphate, said Marine Gen. Joseph Dunford, chairman of the Joint Chiefs of Staff.

“This is about campaign continuity,” Dunford said Friday at the Pentagon, a day after the White House announced it would leave some troops in Syria. “We … always had planned to transition into a stabilization phase, where we train local forces to provide security to prevent the regeneration of ISIS. So, there’s no change in the basic campaign, the resourcing is being adjusted because the threat has been changed.”

The announcement of Trump’s reversal late Thursday was a one-sentence White House statement emailed to reporters and attributed to Press Secretary Sarah Huckabee Sanders. It gave no indication of where in Syria the troops will remain, how long they are expected to stay or precisely what their mission will be other than describing it as a “peacekeeping” operation.

“A small peacekeeping group of about 200 will remain in Syria for a period of time,” Sanders said in the statement.

Pentagon and White House officials declined to provide additional information about Trump’s decision. They would not describe what Sanders meant by peacekeeping, a term typically reserved for a specific mission typically overseen by the United Nations and meant to keep violence from breaking out in tense areas. Peacekeeping missions stress not using any force except in self-defense, according to the UN. There are 14 active peacekeeping missions across the globe now.

One Pentagon official said the Syria mission probably would not fall under that category, describing it as likely being overseen by the United States and focused on providing logistics to partner forces and gathering intelligence. The official, who spoke on the condition of anonymity, said the troops who will withdraw from Syria are expected to do so by the end of April.

The White House’s announcement came after Trump spoke Thursday to Turkey’s President Recep Tayyip Erdogan by phone and had agreed to continue to coordinate “the creation of a potential safe zone” in northeastern Syria, according to a readout of the call provided by the Trump administration.

Trump’s initial announcement Dec. 19 that he would remove all of the roughly 2,000 American troops from Syria came just after the American and Turkish leaders spoke by phone. Trump’s decision stunned top American military officers overseeing the combat effort there and triggered former Defense Secretary Jim Mattis’ resignation in protest one day later.

Pentagon officials and others – including several prominent members of Congress – have since sought to convince Trump to keep at least some servicemembers in Syria. They argued the fight against ISIS was not complete, and withdrawal risked the terrorist group’s return to prominence and the safety of the Kurdish-majority force that has conducted the bulk of the fighting with help from American advisers, artillery and airpower.

Turkey views that U.S.-backed group of Syrian rebels, the Syrian Democratic Forces, as a terrorist group and has repeatedly threatened military action against its Kurdish leadership.

Two U.S. officials said Friday that Trump’s decision to leave some troops in Syria was designed to quash concerns of allies who had expressed frustration with the president’s unilateral decision to leave the country. The officials said the administration hoped it would convince some of those allies, including the United Kingdom and France, to leave some of its troops in Syria, as well.

Dunford said Friday that he expected those allies to remain committed to eastern Syria.

“I am confident we can maintain the campaign as we’ve planned it,” he said.

The 200 American troops are expected to be split between areas in northeastern Syria now controlled by the SDF and the small, U.S.-controlled Tanf base in southern Syria near the borders of Iraq and Jordan, the New York Times and CNN reported, citing unnamed Trump administration officials.

“With this decision, President Trump has decided to follow sound military advice,” Graham said late Thursday in a statement. “The decision will ensure that we will not repeat the mistakes of Iraq [in 2011] in Syria. For a small fraction of the forces we have had in Syria, we can accomplish our national security objectives.”

As the White House grapples with how to handle Syria, ISIS appears to be on its last stand in the country, controlling only a portion of one village in the Middle Euphrates River Valley in eastern Syria, near the Iraq border.

Pentagon officials declined to speculate about how long it would take the Syrian Democratic Forces to capture that remaining section of Baghouz, an effort that has been complicated by the presence of at least 2,000 civilians. One official said it would take “quite some time” to evacuate those civilians safely as fighting with the terrorist group continued. It would take another several weeks, if not months, to clear the area of improvised bombs and other threats left behind by ISIS, the official said.

Even once ISIS is cleared from the remnants of its so-called caliphate – at its height an expanse of some 34,000 square miles across Syria and Iraq – it will remain a terrorist threat in the region, officials have said. ISIS cells are known to operate in the vast desert regions in Syria and Iraq.

Local forces, now with the help of the small group of American military advisers, could be dealing with those cells of ISIS fighters for several more years, one of the Pentagon officials said Friday.