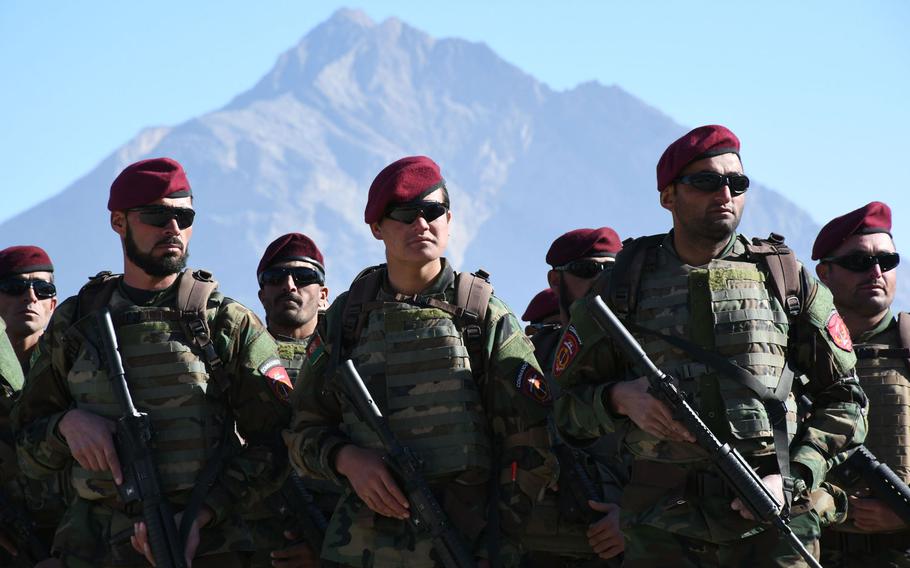 More than 1,000 Afghans graduate from commando training in Kabul on Dec. 6, 2017, part of a U.S.-backed drive to break a stalemate with insurgents, who are said to control more territory than at any other time since 2001. (Phillip Walter Wellman/Stars and Stripes)

KABUL, Afghanistan — The U.S. military is keeping information from the public that gauges the war in Afghanistan’s success, a government watchdog said after significant insurgent gains.

The Defense Department has restricted data on population figures and on what areas are held by either the government or insurgents, the Special Inspector General for Afghanistan Reconstruction, or SIGAR, said in a report released late Monday.

“The number of districts controlled or influenced by the Afghan government had been one of the last remaining publicly available indicators for members of Congress ... and for the American public of how the 16-year-long U.S. effort to secure Afghanistan is faring,” John Sopko, the special inspector general, said in the report.

It’s the first time that SIGAR has been instructed not to release unclassified information to the American taxpayer in one of its quarterly reports, Sopko said, and will instead include the information in an annex unavailable to the public. The watchdog was given no justification for the new restrictions, according to the report.

SIGAR said the “worrisome development” follows an overall increase of insurgent control or influence in Afghanistan since it began reporting these data two years ago, “a fact that should cause even more concern about its disappearance from public disclosure and discussion.”

It also comes after several other measures for gauging the development and strength of Afghanistan’s security forces — which are heavily funded by the U.S. — were blocked or restricted in the fall. Among them were casualty and attrition rates.

The DOD also classified the exact strength figures for most of the Afghan security forces this quarter, SIGAR said. The watchdog added that specific security goals for Afghanistan outlined in the Trump administration’s new South Asia strategy and information about the recent rise in U.S. and coalition airstrikes in the country have also been classified.

Responding to the report, Navy Capt. Thomas Gresback, a spokesman for U.S. forces in Afghanistan, told Stars and Stripes that “somewhere in the data transfer process, SIGAR labeled the population control numbers incorrectly.” He said his office would be able to provide the most up-to-date numbers, but was only immediately able to disclose data from October, which was included in SIGAR’s last report.

Gen. John Nicholson, the U.S.’s top commander in Afghanistan, discussed population-control data with reporters in late November. At the time, he said 64 percent of the population was under government control or influence, 12 percent was under insurgent control or influence and the reaming 24 percent was contested. Those approximate figures were also included in an unclassified DOD report published days later.

It’s unclear whether the DOD will continue to publish the data.

The latest numbers show that the expansion of U.S. military capabilities under Trump’s new strategy has yet to increase the Afghan government’s dominance.

Kabul’s U.S.-endorsed goal is to control 80 percent of its population within the next two years.

As of Dec. 31, 2017, Congress had appropriated more than $74.8 billion to support Afghan forces. SIGAR noted that this constitutes more than 60 percent of all U.S. reconstruction funding in Afghanistan since 2002.