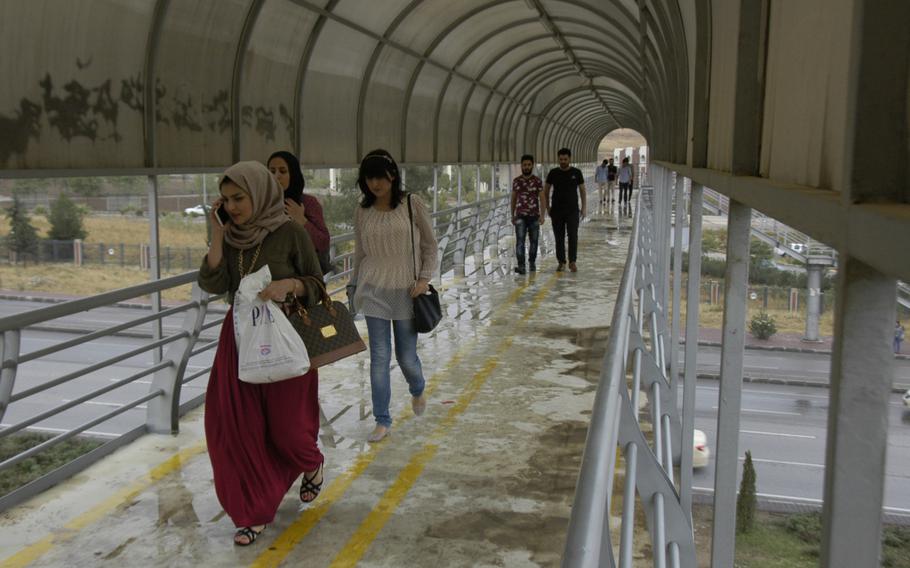 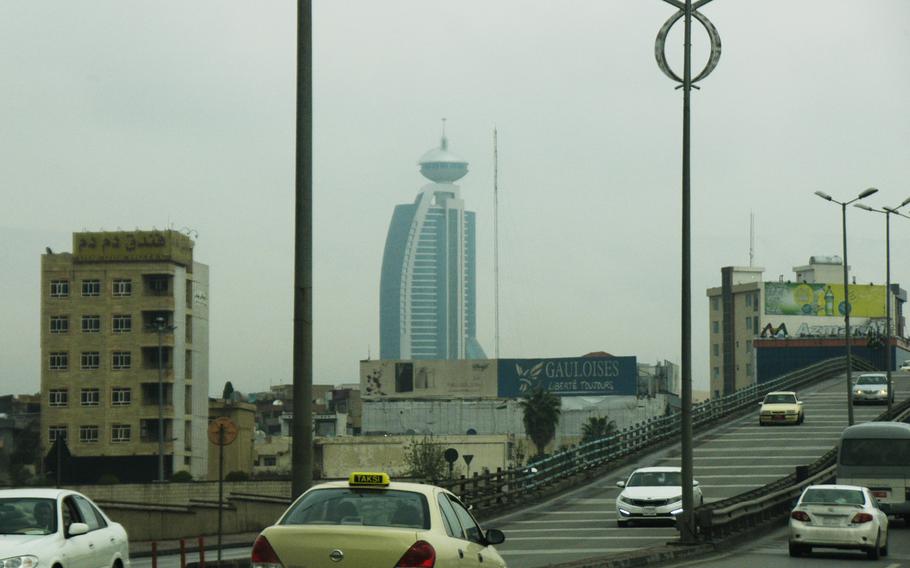 Skyscrapers have transformed cities in Iraqi Kurdistan such as Sulaimaniyah over the past decade. (Seth Robson/Stars and Stripes) 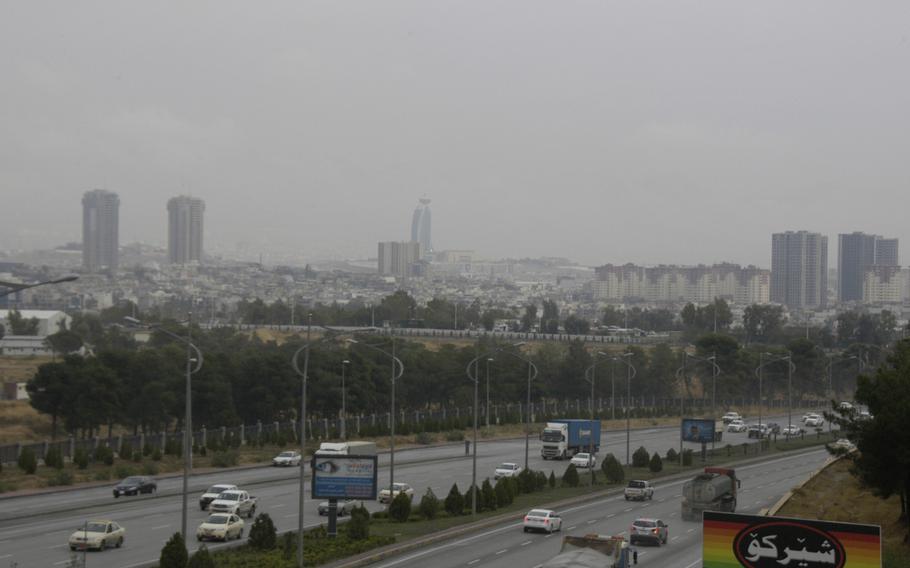 Afternoon traffic on a multilane freeway in Sulaimaniyah, one of several large cities in Iraqi Kurdistan in October 2015. (Seth Robson/Stars and Stripes) 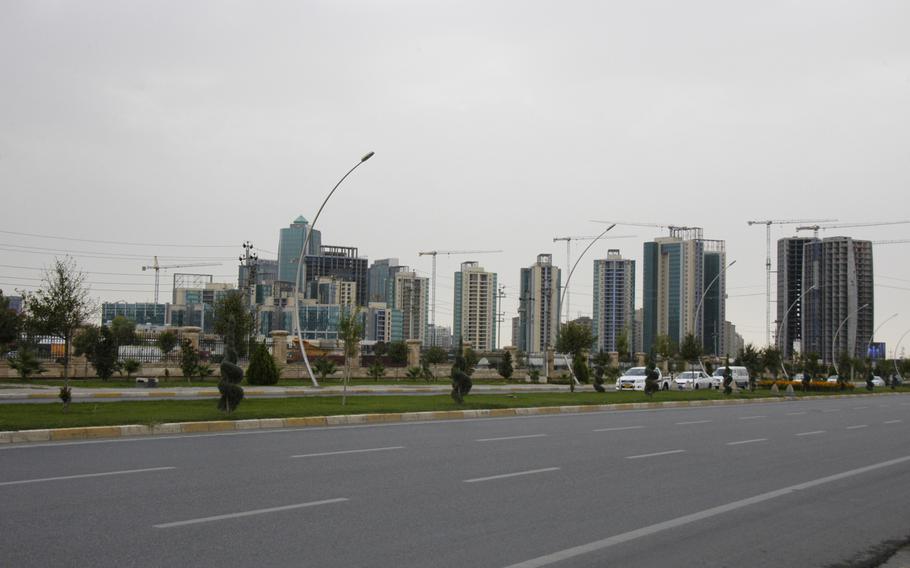 Construction appeared to have stalled in late October 2015 at Empire World, a sprawling high-rise development in Irbil, Iraq. (Seth Robson/Stars and Stripes) High-rise construction in Irbil, Iraq, in October 2015. With an economic downturn, construction has halted on many such projects. (Seth Robson/Stars and Stripes) A half-built high-rise development in Irbil, Iraq, where an economic downturn has slowed or halted many such projects. (Seth Robson/Stars and Stripes) 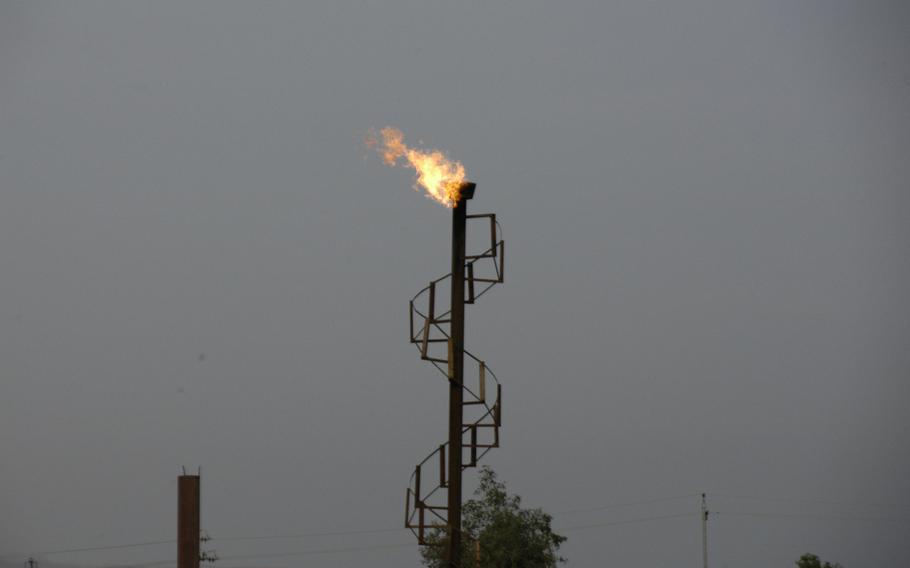 Flame spurts from a flare stack near Kirkuk, Iraq. (Seth Robson/Stars and Stripes)

IRBIL, Iraq — The drop in world oil prices and the strains of the war against the Islamic State have reversed the economic boom that had made the self-ruled Kurdish region of Iraq a rare success story in the troubled Middle East, threatening the Kurds’ role in the campaign to defeat the Islamist extremists.

Two years ago, the three provinces of Iraqi Kurdistan were looking prosperous, with high rises transforming the skyline of its capital of Irbil and foreign investors jamming the city’s hotels.

Now, gray concrete skeletons of half-built skyscrapers loom over unfinished roadways that cannot be completed until the regional government gets its finances in order. Foreigners are leaving and government employees haven’t been paid for months.

On the battlefield, Kurdish peshmerga fighters have blunted last year’s Islamic State offensive toward Irbil and have managed to recapture the strategic city of Sinjar, whose fall in 2014 helped galvanize U.S. and Western efforts to crush the extremist movement.

But those battlefield successes may not be sustainable if the Kurdistan government cannot resolve the growing economic and social problems.

The Kurdish economy, struggling to cope with an influx of almost 1.8 million people fleeing the Islamic State, has been hit hard by a sharp drop in the price of oil, which has been trading at below $50 a barrel since mid-summer. The economic slowdown could eventually affect the Kurds’ ability to sustain a long military offensive against the jihadists.

The regional government is exporting more than 600,000 barrels of oil a day independent of Iraq’s federal government, angering the authorities in Baghdad. That’s helping offset funding shortfalls from Baghdad, which is supposed to forward 17 percent of the national budget to Kurdistan, according to the Kurdish Ministry of Natural Resources. But, according to The Associated Press, the Kurdish regional government has received only $2 billion of the roughly $18 billion to which it is entitled.

“The Kurds are getting some money but it is clearly not enough,” said Tennessee Technological University political science professor Michael Gunter, an expert on the region who visited Kurdistan last year.

Some peshmerga — members of the regional government’s military force — say they’re still getting paid. However, Bloomberg Business reported this month that other fighters and government workers have been going without salaries, some for months.

In Irbil, there’s not much evidence of the war with the Islamic State that’s in progress only two hours’ drive away other than long bus convoys taking soldiers to the front.

Irbil businessman Aziz Hager, 33, who sells armored V-8 Toyota Land Cruisers to the peshmerga and foreign oil companies, said business was good until last year. In recent months, however, government checks for the trucks have been bouncing.

Homes in Irbil that were selling for a million dollars last year are now worth $200,000, Hager said.

Locals who haven’t been paid are dipping into their savings. When they reach a critical level, some are choosing to head for Europe and wait there for things to get better, he said.

If the economy keeps tanking, the regional government might see an end to relative stability that has led to an influx of investment by multinational corporations, said Gunter, who has written several books about the Kurds in Turkey, Iraq and Syria.

“For several months, there has been an economic crisis that is turning into a political crisis,” he said.

As long as the economy was booming, Kurdish leaders could keep a lid on the political problems in Kurdistan, which has been dominated by President Massoud Barzani. With the economy tanking, those other pressures are boiling to the surface.

Barzani, who first won office in June 2005, was limited to two four-year terms, but this was extended in 2013 by two more years in a deal between his Kurdish Democratic Party and the rival Patriotic Union of Kurdistan, led by Iraq’s ailing former president, Jalal Talabani. Now, Barzani claims the president can only be replaced through elections, which the parliament has stalled because Barzani’s allies argue the region needs stability due to the Islamic State threat.

That has led to protests and a government crackdown that saw the expulsion from the capital of some of his political rivals from Gorran (Change), a political party that has been critical of Barzani.

Things have gotten so bad that some fear a resumption of the civil war that pitted Barzani’s KDP against the PUK in the mid-1990s.

Driving between the northwest of Iraqi Kurdistan, where the cities of Irbil and Dohuk are controlled by Barzani’s KDP and the southeast, where Sulaimaniyah and the recently acquired oil fields surrounding Kirkuk are in the hands of the rival PUK is a little like moving between the U.S. and Mexico.

Motorists leaving Irbil pass through KDP checkpoints, where photographs of a smiling Barzani being frisked remind proud locals that even the president will submit to a pat-down.

Peshmerga at some checkpoints waive motorists through with a glance at identification and a few cursory questions. Others search cars and luggage for evidence of weapons or involvement with the Islamic State. Arabs get extra scrutiny and have their own queues.

Kirkuk, which the peshmerga occupied after Iraqi troops fled from Islamic State militants advancing on the city last year, looks like it has seen little love in the years since the U.S.-led invasion that toppled Iraqi President Saddam Hussein in 2003.

There are no high-rise construction or new buildings on the road through a city that sits on top of some of the largest proven oil reserves in the world. Sunni Arab residents, who Kurds are apt to warn are in league with the Islamic State, might question why there is so little development in their town compared to other parts of northern Iraq.

In contrast, Sulaimaniyah, like Irbil, seems vibrant, with plenty of new construction, including a gleaming new shopping mall and university beside the road into town.

Berivan Kamal, 18, a civil engineering student at the University of Sulaimaniyah, said her teachers haven’t been paid for months.

“The teachers are still kind to us and teaching us, but if they go another month maybe they can’t continue,” she said. “If the parents don’t have money, then the students will have to finish their study and look for work.”

However, Geologist Kaeron Qadir, 31, who recently returned to Sulaimaniyah after studying in Britain, doesn’t see the civil war reigniting amid the economic and political unrest.

So far, the economic decline which resulted in violent protests causing several deaths in October, doesn’t appear to be affecting the peshmerga battling the Islamic State. However, the future prosperity of Iraqi Kurdistan once the militants have been defeated remains uncertain.