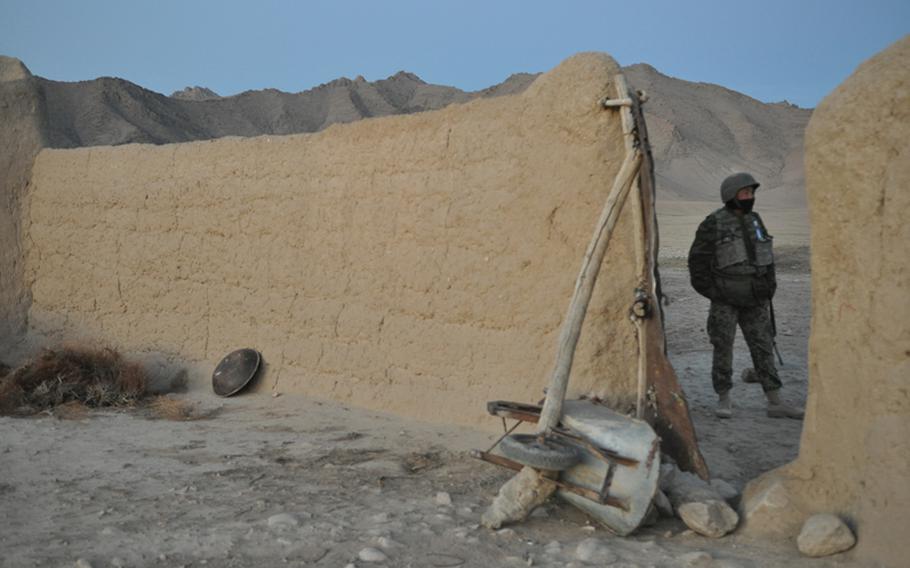 Buy Photo
An Afghan soldier patrols outside of a mud wall compound in Ghorak district, Kandahar province, during a recent joint U.S.-Afghan mission to the remote Taliban-influenced area. It could be a make or break year for U.S. forces in Kandahar, as commanders prepare for a planned drawdown that will begin in earnest this summer with the reduction of 30,000 U.S. troops. (Heath Druzin/Stars and Stripes)

Buy Photo
An Afghan soldier patrols outside of a mud wall compound in Ghorak district, Kandahar province, during a recent joint U.S.-Afghan mission to the remote Taliban-influenced area. It could be a make or break year for U.S. forces in Kandahar, as commanders prepare for a planned drawdown that will begin in earnest this summer with the reduction of 30,000 U.S. troops. (Heath Druzin/Stars and Stripes) 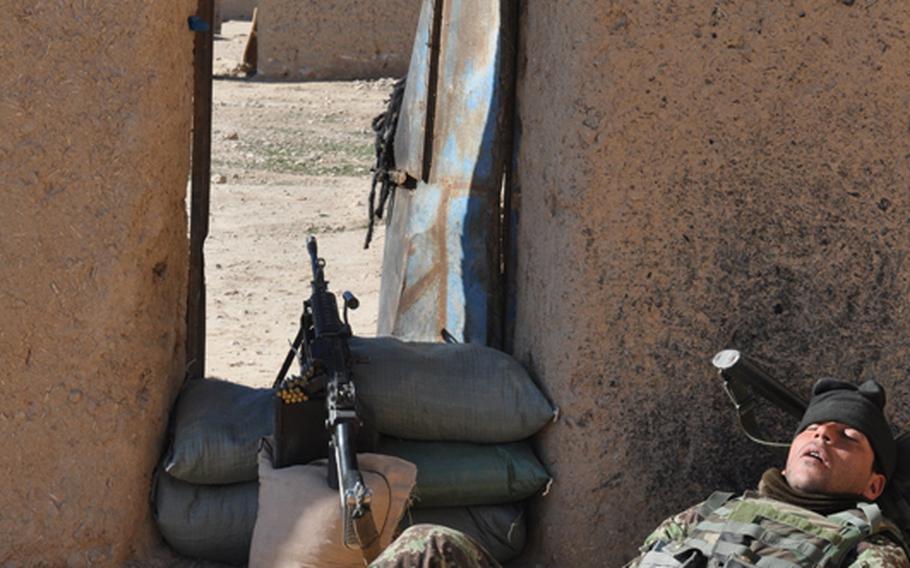 Buy Photo
An Afghan soldier guarding the door to a compound occupied by Afghan and U.S. troops during a recent mission to Ghorak district, Kandahar province. (Heath Druzin/Stars and Stripes) 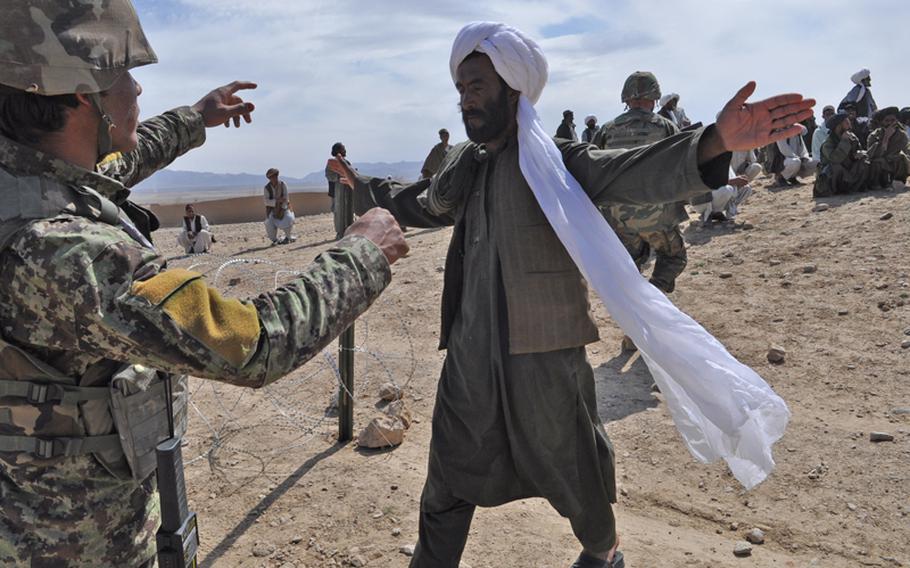 Buy Photo
An Afghan soldier searches villagers at the entrance to a shura in Ghorak district, Kandahar province. (Heath Druzin/Stars and Stripes) 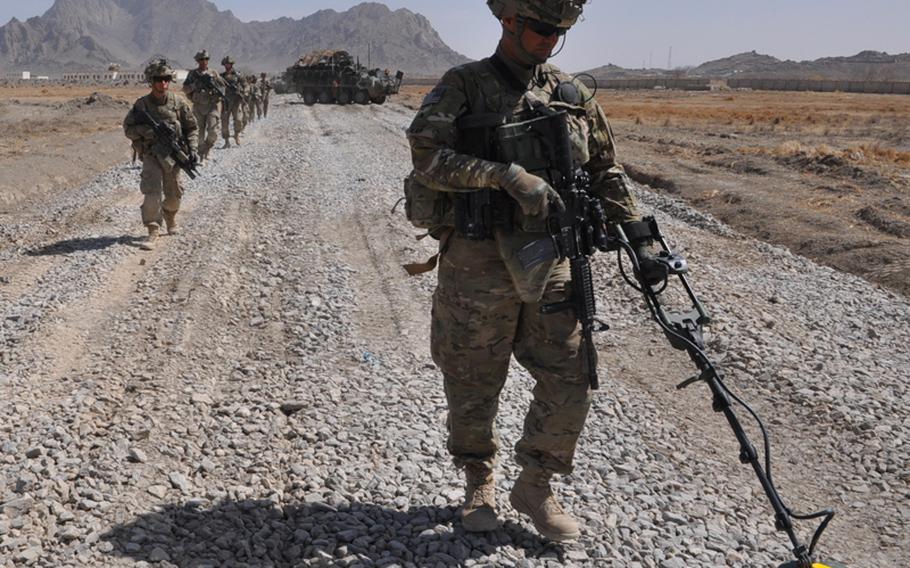 Buy Photo
Sgt. Joseph Reap Sr., 32, of Oklahoma City, sweeps for landmines in Pashmul, a hotly contested corner of Kandahar province where insurgents have sown the footpaths and farm fields with bombs. (Heath Druzin/Stars and Stripes) 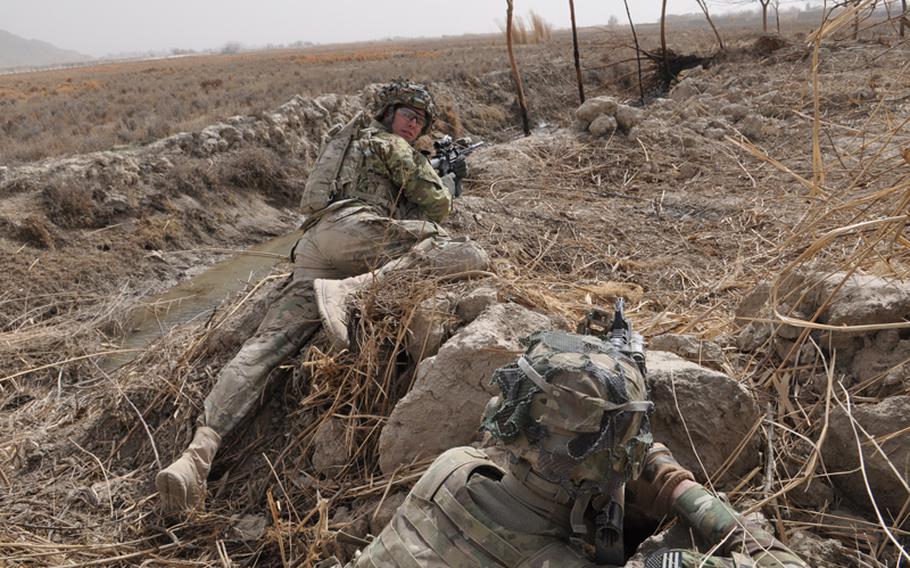 GHORAK DISTRICT, Afghanistan &mdash; If the Taliban&rsquo;s spiritual heartland is to be pacified in the next two years, the struggle won&rsquo;t be in the handful of model villages commanders are keen to show visiting journalists. Instead, success will hinge on gaining control of lawless regions like this mountainous, rock-strewn corner of Kandahar province, where opium is the currency and the Taliban is the law.

The district government was long ago chased off by insurgents, as was a contingent of the Afghan National Police. U.S. Army Lt. Col. Steven Soika, who led a recent incursion into the area, compared the villages there to the rough and tumble smuggling hub of Mos Eisley from &ldquo;Star Wars.&rdquo;

&ldquo;It&rsquo;s a trading post for contraband,&rdquo; Soika said, adding that it&rsquo;s a clearinghouse for drugs and weapons in part because U.S. troops hadn&rsquo;t been there for months before the recent mission.

While coalition troops have made gains in Kandahar province, often at great cost, and U.S. commanders are fond of pointing to a handful of &ldquo;model villages&rdquo; where Taliban activity has been curtailed, much of the Taliban&rsquo;s spiritual homeland is still violent and largely out of the reach of the Kabul government. Complicating the effort is continuing government corruption and infiltration of the still poorly trained Afghan security forces &mdash; villagers in Ghorak said they and local insurgents got word of the U.S. incursion weeks ahead of time, likely from an Afghan soldier sympathetic to the Taliban.

Going into what looks to be a make-or-break fighting season in which to make gains ahead of President Barack Obama&rsquo;s planned 2014 drawdown (with about 30,000 soldiers scheduled to come home later this summer), much is still unresolved in Kandahar, from Taliban influence to government corruption, as U.S. commanders in the province plan how to preserve fragile gains with fewer troops.

Soika&rsquo;s Ghorak mission, an air assault in which hundreds of soldiers were inserted by Chinook helicopters in the wee hours of the morning, was heavy on symbolism. Asadullah Khalid, the controversial security chief for southern Afghanistan, hosted a meeting of elders, touting water and school projects that are often promised in this country and sometimes delivered, and the Afghan flag was briefly hoisted above a building to the tune of the Afghan national anthem.

Villagers demanded two dams to help irrigate their crops, largely opium, but Khalid, who left his former post as Kandahar governor after being accused of running a torture chamber and ordering the killing of United Nations workers, hedged, saying only that he would do his best.

&ldquo;If you give us two dams, we will cooperate,&rdquo; a villager said.

The Taliban noticed the U.S. presence in Ghorak, posting a story on their official English language website, and adding that their fighters killed two Afghan soldiers in the district with a bomb blast after the shura, a claim Coalition soldiers denied.

As Soika&rsquo;s soldiers left after two quiet days in which one suspected IED workshop was found but no shots fired, there was still no government presence in town and no timeline for it to return. Judging from the Taliban&rsquo;s strongly worded response, they will not give up their secluded sanctuary without a fight.

Soika sees missions like the one to Ghorak as critical to boxing in an insurgency that has proved resilient, even with the war in its 11th year.

&ldquo;The reason we&rsquo;re doing the deliberate operations right now is to take away these historic (insurgent) sanctuaries,&rdquo; he said.

Though Soika says the fighting may be less severe than predicted this summer, for the symbolism of his Ghorak foray to translate into real gains, there will be plenty of pitched battles ahead. With 2014 the looming, time is running short to make progress.

Already soldiers in Kandahar province are getting a taste of things to come as the mercury rises and fighters start streaming back from Pakistan for the traditional fighting season that kicks off in a few weeks.

Visitors to a tiny Combat Outpost Pashmul South are greeted at the gate by reminders of the perils that lie beyond the concertina wire. A bullet-pocked sport utility vehicle an unfortunate local contractor once drove slumps against the Hesco barriers next to a pair of defused roadside bombs.

Pashmul South, in Zharay district, is home to the 5th Battalion, 20th Infantry Regiment&rsquo;s Company C, and the soldiers here who push out into the poppy-rich countryside beyond the walls know only too well that their area, not far from the village where Mullah Omar declared himself leader of the faithful, won&rsquo;t be easily controlled.

During a recent patrol to the partially ruined village of Haji Musa, the eerie quiet of the seemingly abandoned town was broken when a bomb-detecting vehicle hit a roadside bomb 200 yards from the infantrymen (earlier in the day the bomb team had found another bomb close by). Then, as the Company C soldiers gingerly walked single-file through deep rows of grapevines to avoid any of the rash of bombs that have been killing and maiming American and Afghan soldiers, rifle fire rang out. From behind the mud-brick walls across an open expanse, insurgents were targeting their eight-wheeled Strykers.

It was just one of several firefights the company experienced in just a few days; roadside bombs have become a daily occurrence.

Afghans in the lead?

There&rsquo;s a common joke in Afghanistan. A man asks Hamid Karzai, &ldquo;How come you keep all these corrupt people in your government?&rdquo; Karzai replies, &ldquo;How much will you pay me to kick them out?&rdquo;

Most of the villagers around Pashmul have fled heavy fighting and now live in neighboring Panjwai, crossing back into Pashmul only to tend their fields. Persuading them to come back may be more complicated than simply beating back the Taliban, though, as many villagers complain of corruption. They say the district governor takes half of every claim made for damaged farmland or irrigation ditches to pay off the $200,000 bribe he is said to have paid for his position.

Corruption in Pashmul extends to some of the security forces, too. Afghan Uniform Police routinely ransom off detainees, a frustration for Company C Commander Capt. Nate Smith, who recently saw three men picked up for triggering a roadside bomb released the next day by the local police chief.

&ldquo;The right hand doesn&rsquo;t know what the left hand is doing,&rdquo; he said upon hearing of the release.

Despite that, Smith thinks his soldiers can turn things around during their tour &ldquo;if everything goes right&rdquo; and pointed to the success of local militias, known as Afghan Local Police, in curbing Taliban violence in some areas.

&ldquo;I&rsquo;m optimistic,&rdquo; he said. &ldquo;These guys are on the precipice of success.&rdquo;

The big question, of course, is whether the Afghan National Army will be ready to take the lead by 2014, something Obama is banking on. While there have been improvements in training and professionalism, their ranks are still riven with drug-users and Taliban infiltrators. Discipline is sloppy and problems apparent in both Ghorak and Zharay districts.

During a recent combined U.S.-Afghan operation out of Pashmul South, an Afghan Army Humvee was blown up by a roadside bomb. Afghan soldiers responded as they often do, firing randomly in all directions, sending bullets sailing over the heads of their American counterparts.

As the patrol returned to the base in the dark rifle shots cracked and snapped over their heads. Everyone hit the ground, fearing a sniper. It turned out to be an Afghan soldier manning a tower at Pashmul South who mistook them for insurgents.