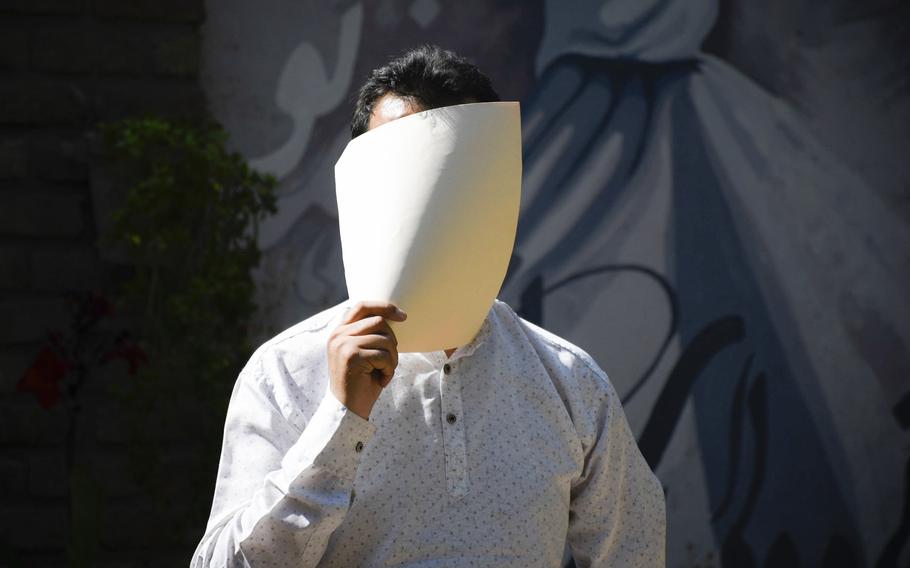 Buy Photo
An Afghan interpreter for U.S. forces, who asked Stars and Stripes not use his name or show his face due to death threats, poses for a photo. An Afghan worker for U.S. forces was killed by gunmen on Jan. 27, 2021, while waiting for a U.S. immigration visa. The worker's widow and children are now requesting refuge in America. (J.P. Lawrence / Stars and Stripes)

KABUL, Afghanistan — Lawmakers and veterans are asking Washington to give refuge to the family of an Afghan man who aided American forces and was slain by the Taliban while waiting for a U.S. visa.

The man, known by the pseudonym “Mohammad” to protect his family, received constant threats after working for the U.S. Embassy and military in Afghanistan for more than 12 years, family members and his lawyer said.

Mohammad was one of tens of thousands of Afghans since 2009 who have applied to the Special Immigrant Visa program, which allows those who aided the U.S. to immigrate with their families, separate from regular refugee limits.

Mohammed had been waiting more than a decade for his SIV application to be approved, The Atlantic reported in March. He had just received U.S. Embassy approval, a key step in the process, weeks before the Taliban gunned him down in January, the report said.

Lawyers for Mohammed’s widow and six children say the family continues to receive Taliban threats, which led Rep. Seth Moulton, a Massachusetts Democrat on the House Armed Services Committee, to offer support for the family’s efforts to immigrate.

Moulton said that Rep. Earl Blumenauer, an Oregon Democrat, co-signed a letter with him to U.S. Citizenship and Immigration Services on Mohammed’s family’s behalf.

“This person paid the ultimate price for our nation because we failed him,” Moulton, who deployed four times to Iraq as a Marine, said in a statement. “The least we can do now is ensure his widow and children are able to come to America and to the safety that is found within our borders.”

The family could be granted humanitarian parole, which “seems like the only feasible option to get the family to the U.S. safely and quickly,” said the family’s lawyer, Julie Kornfeld, of the International Refugee Assistance Project.

Mohammad died after dropping his son off at school, said Mustafa, a pseudonym for one of his sons.

“He was attacked and murdered,” Mustafa said. “He used to work for the U.S. government, and he had a lot of threats, and he was asked to leave his job. But my dad never gave up, he just did his duty.”

Last fall, the Taliban arrived at an engagement party looking for Mohammed, Kornfeld said. They killed three other relatives when they couldn’t find him, she said.

Assassinations and violence have spiked over the past year, following a U.S.-Taliban peace agreement that largely stopped the militants from attacking foreign forces, but has emboldened the group as they anticipate an eventual U.S. troop withdrawal.

Mohammad’s 10-year-old son, who witnessed his father’s murder and heard the gunmen’s taunting, remains traumatized by the attack and is having trouble speaking to his family, Kornfeld said.

“We want to live in a peaceful environment,” Mustafa said. “Help us get out of this country and into safety.”

Advocates for the family have petitioned USCIS, which handles humanitarian parole cases.

The parole status would allow the family to come to the U.S., where they could continue Mohammad’s SIV case or apply for asylum, Kornfeld said.

Should the family receive approval to come to the U.S., veterans in Houston have already organized to help the family, said Cress Clippard, a Marine veteran and a volunteer for the group Combined Arms SIVs and Allies.

“It’s such a dire situation that we’re doing whatever we can to accommodate them, if we can get them here,” Clippard said.