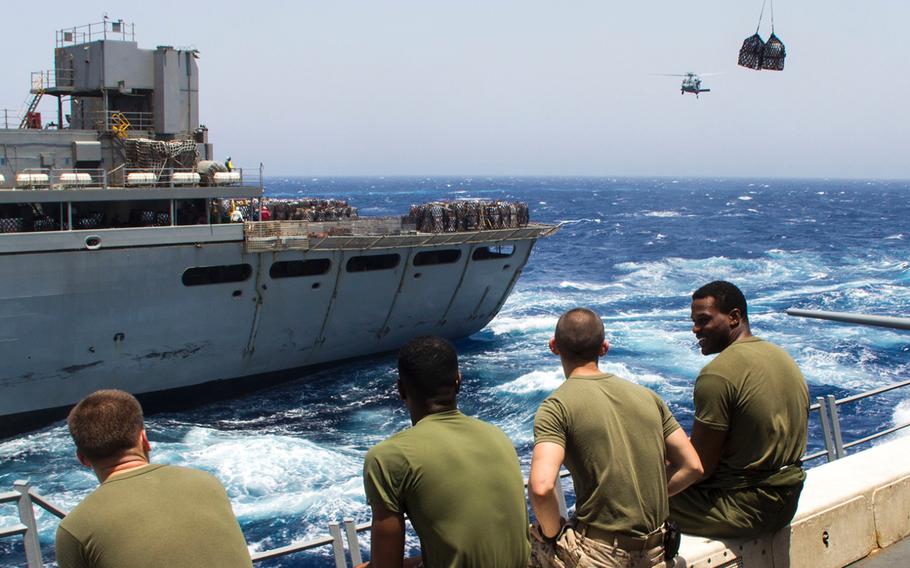 U.S. Marines assigned to the 26th Marine Expeditionary Unit sit on the flight deck before a Navy MH-60S Seahawk helicopter transports food and supplies to the USS San Antonio (LPD 17), during a resupply at sea, July 9, 2013. The 26th MEU is a Marine Air-Ground Task Force forward deployed to the U.S. 5th Fleet area of responsibility aboard the Kearsarge Amphibious Ready Group. ( Juanenrique Owings/U.S. Marine Corps)

WASHINGTON – As political unrest continues in post-coup Egypt, two amphibious assault ships have moved to the coast there, the commandant of the Marine Corps said Thursday.

The USS Kearsarge and the USS San Antonio “moved up into the Red Sea and parked off of Egypt,” a couple of nights ago, “because we don’t know what’s going to happen,” Gen. James Amos said.

Amos was speaking with Chief of Naval Operations Adm. Jonathan Greenert at a forum on the future of maritime forces, which was held at the Center for Strategic and International Studies.

Having noted earlier that he thinks “there’s zero peace dividend” coming out Afghanistan, he used the situation in Egypt as part of his pitch that despite uncertain budget times the U.S. military should maintain a robust presence throughout the world.

“Crisis happens. Egypt is a crisis right now,” Amos said. “When that happens...what we owe the senior leadership of our nation is versatile options.”

The two ships are “there on purpose,” he said. “That’s the flexibility that in a response to a crisis we have to have.”

He and Greenert also discussed the pivot to Asia, a strategy that they are working on how to implement within the current budget constraints.

The build up in Australia is continuing with the number of Marines in Darwin set to grow from 250 to 1,000 in 2014, and the Marines have gone from one to three battalions on the Japanese island of Okinawa with a fourth headed there this fall.