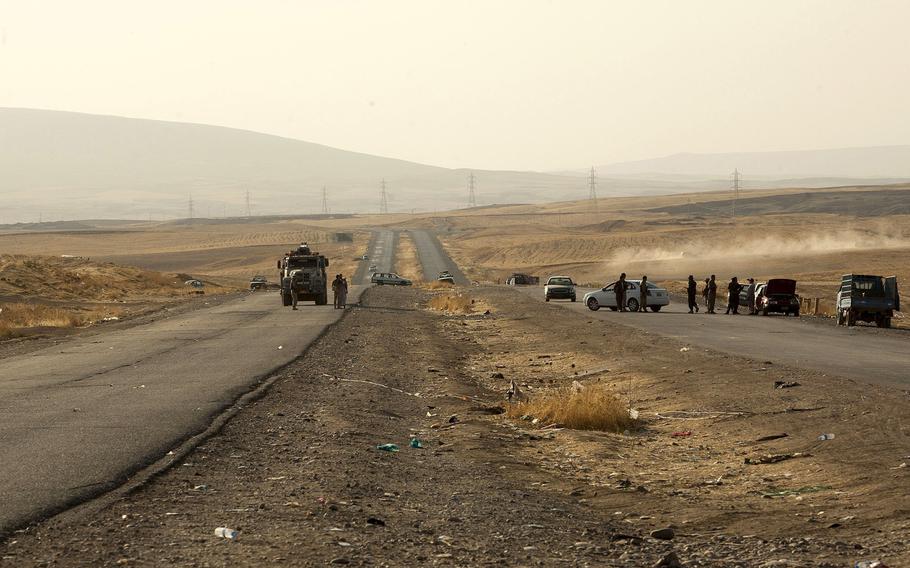 Abandoned cars that ran out of gasoline while fleeing the rapid advance of the Islamic State militants litter the final checkpoint on the highway on Aug. 7, 2014 near Kalak, Iraq. The militants' front lines lie about about one mile down the road from this point. (Mitchell Prothero, McClatchy Washington Bureau/MCT)

WASHINGTON — The Pentagon may conduct a humanitarian relief operation in Iraq to aid members of a religious minority who are stranded on a mountain and trapped by Islamic militants, according to officials.

The Pentagon is already assisting Iraqi relief efforts, and is prepared to become directly involved.

“We have been working urgently and directly with officials in Baghdad and Irbil to coordinate Iraqi airdrops to people in need,” a defense official said in a statement to Stars and Stripes on condition of anonymity. “The government of Iraq has initiated air drops in the region and we are in constant communication with them on how we can help coordinate additional relief, enhance their efforts, and provide direct assistance wherever possible.”

The New York Times reported earlier Thursday that President Obama has been weighing a series of options ranging from dropping humanitarian supplies on Mount Sinjar to airstrikes on Islamic State fighters at the base of the mountain, a senior administration official said.

“I’m not in a position to rule things on the table or off the table,” he said told reporters. “The humanitarian situation is deeply disturbing there. And it’s one that we are following closely.”

Earnest did stress that no U.S. ground troops would be involved in any military operation in Iraq.

The administration had been delaying taking any military action against ISIS until there is a new Iraqi government; both White House and Pentagon officials have said privately that the United States would not intervene militarily until Prime Minister Nouri al-Maliki stepped down.

But administration officials acknowledged that the crisis on Mount Sinjar may be forcing their hand, the Times reported.

“There could be a humanitarian catastrophe there,” a second administration official told the Times, adding that a decision from Obama was expected “imminently — this could be a fast-moving train.”

For nearly two months, Kurdish forces had managed to protect the area from the Sunni extremists, who have rampaged through much of northern Iraq, slaughtering opponents, destroying ancient shrines and demanding that people of other religions convert or die. But last weekend, the famously tough Kurdish fighters suffered their first setbacks in the Sinjar region, prompting hundreds of thousands of civilians to flee.

An estimated 10,000 to 40,000 of them sought refuge on the craggy peaks of Mount Sinjar — largely members of the minority Yazidi sect. They fear death if they descend into areas controlled by the extremist rebels, who consider them apostates. Kurdish forces so far have failed to break through the militants’ lines to reach them, despite launching a counteroffensive early this week.

The Iraqi government conducted two airdrops of aid to the desperate refugees on Wednesday, but humanitarian workers said they did not come close to meeting the growing need. Some of the water bottles in the aid bundles cracked open.

“Is help coming?” one of those trapped on the mountain, Shihab Balki, 23, asked when contacted by cellphone — one of the few belonging to the refugees that still had battery life. He said that at least 17 children have died on the mountain because of the inhospitable conditions.

“I’m standing here next to an old lady and a child lying on the ground, they are not dead, but we fear they are dying,” Balki said.

UNICEF says it has confirmed that children have perished on Mount Sinjar but does not have verified up-to-date figures.

Balki said later Wednesday that he had managed to secure about four gallons of water for his family of seven from one of the day’s airdrops — not nearly enough in the hot Iraqi summer. Many of the bottles dropped in a wooden crate had cracked, their precious contents spilling onto the rocks, he said. Earlier airdrops included food and milk, but the cartons of milk also smashed on the mountainside, he said.

Haji Ghandour, a Yazidi parliamentarian in Baghdad, said the shortage of aid was acute.

“There are some airdrops, but they aren’t even covering half the need,” he said. “Most of these supplies fall near to [Islamic State fighters], others break and are ruined. The operation is not accurate.”

The United Nations says the Iraqi government has yet to take up an offer of technical assistance for airdrops, which are being coordinated with local authorities in the semiautonomous Kurdish region.

Meanwhile, tens of thousands of newly displaced people have flooded into the Kurdish region, which Bakir said lacks the finances to assist them. The region, which is home to just over 5 million residents, is now hosting an additional 1.5 million people — refugees from the Syrian war and internally displaced Iraqis, he said.

Kurdish officials had warned for weeks that they were unable to maintain the fight along the semiautonomous region’s 650-mile-long front with the militants, unless the Kurds got outside support.

The Kurds say they are trying to put out fires on multiple fronts, trying to recapture land only to be attacked elsewhere as Islamic State continues to jab at its boundaries.

That threat was underscored Wednesday when, as Kurdish forces continued their counteroffensive near Sinjar, they were forced to send reinforcements 150 miles east to Makhmur and Gweir as militants attempted to push closer to the regional capital, Irbil.

“It’s not fair that we are left fighting these terrorists alone,” said Bakir, the Kurdistan region’s foreign minister. “We need immediate action. We look to the United States, we look to NATO.”

“The West have armed many groups around the world, why not help us be in the front against terrorism?” Bakir said. “We don’t understand.”