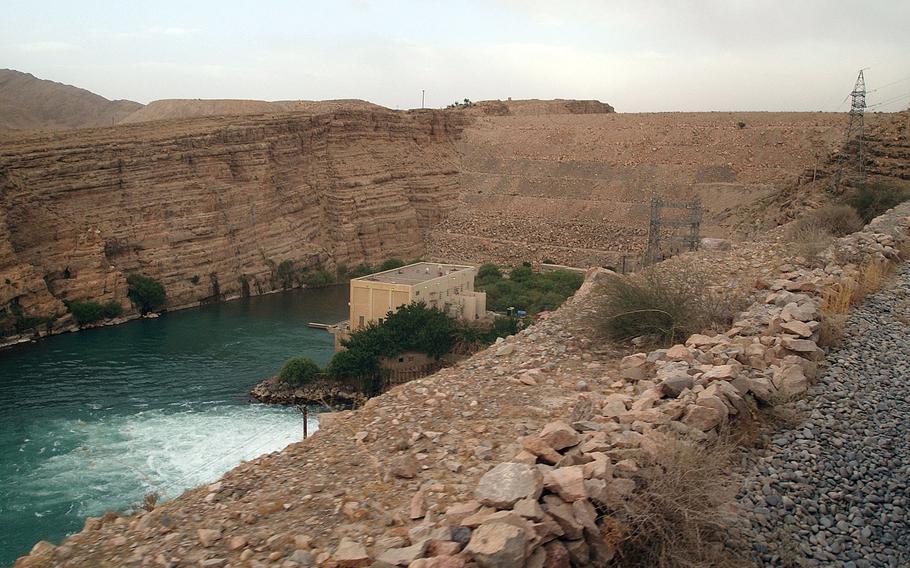 The Kajaki Dam and power station, seen here in a 2011 photo, is a project begun by the U.S. in 1953 to bring development to southern Afghanistan. The dam has been turned over to Afghan control, but the U.S. Special Inspector General for Afghanistan Reconstruction has raised concern about "possible weaknesses" in the oversight of the project. (Matt Millham/Stars and Stripes)

KABUL — The top U.S. government watchdog for Afghanistan has issued an alert over what he calls “possible weaknesses” in the oversight of a troubled dam project that has become a symbol of America’s fraught reconstruction effort in Afghanistan.

A letter from Special Inspector General For Afghanistan Reconstruction John Sopko raises concerns about lack of vetting power and access to the Kajaki Dam for the U.S. Agency for International Development, which has pledged $75 million in direct aid to Afghanistan’s national power utility to install an additional turbine at the site, in the volatile southern province of Helmand.

“I am concerned that these oversight provisions are not as robust as they should be, which could make these funds more vulnerable to waste, fraud, and abuse,” Sopko wrote in a letter addressed to USAID chief Rajiv Shah and USAID’s Afghanistan director, William Hammink.

But in response to a Stripes query, Hammink said the safeguards Sopko is asking for are already in the contract.

USAID has pledged nearly $340 million in direct assistance — meaning U.S. funds going directly to the Afghan government without the use of intermediaries — to Da Afghanistan Breshna Sherkat, Afghanistan’s national utility. That includes the money for the turbine installation, intended to increase power production in southern Afghanistan.

The rest of the money is slated to go to the Power Transmission Expansion and Connectivity (PTEC) project, which is to improve Afghanistan’s electrical transmission system.

According to Sopko, the PTEC money has more stringent oversight provisions than the money tied to the turbine and he recommends adding those requirements to the turbine funds.

These are the three provisions from the PTEC contract Sopko recommended be added to the turbine contract:

Under the PTEC agreement, USAID reviews all procurement actions, and the national utility must submit documentation related to contracting. USAID has the right to block procurement action if it has concerns about the documentation. USAID has the right to vet organizations and individuals who may receive USAID funds related to the PTEC project. USAID and their quality assurance contractor are guaranteed access to all Da Afghanistan Breshna Sherkat facilities, equipment and documents related to the PTEC project, including the utility’s employees, authorized representatives, and organizations and people hired to work on the project.Hammink, however, contended that all three safeguards are already in the turbine contract.

“USAID completely agrees with SIGAR’s position that conditionalities similar to those that govern the USAID PTEC project should also apply to the agreements that govern the Kajaki Dam Unit 2 Project,” Hammink said in a statement emailed in response to a Stripes query. “In fact, such oversight provisions are already embedded within existing Strategic Objective Grant Agreement (SOAG) documents and the (Da Afghanistan Breshna Sherkat) contract with the Kajaki Unit 2 Project contractor.”

The Kajaki Dam was originally built by the U.S. in the 1950s and the planned installation of three new turbines in the 1970s was halted by the Soviet invasion of Afghanistan in 1979, which turned into a nine-year war. The dam sits in a violent corner of Helmand province, which has been, by far, the deadliest province for coalition troops in Afghanistan since the U.S.-led invasion of the country in October 2001.

The U.S. subsequently budgeted $18 million for the third turbine, which was slated to be installed by 2005. After going woefully over budget and taking years more than expected, USAID turned administration of the project over to the Afghan government last summer, but is still funding it.