US troops told not to wear Kurdish forces patches 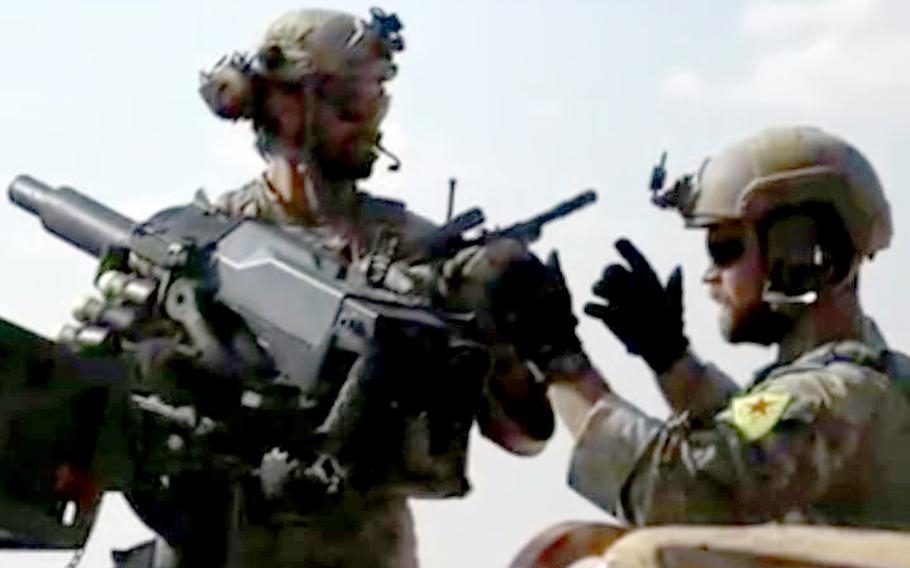 A video screen grab shows troops in Syria wearing the insignia patch of a Kurdish militant group considered a terrorist group by Turkey. The Pentagon announced on Friday, May 27, 2016, that U.S. troops have been ordered to remove the patches. (YouTube)

Though American commandos have a long-held tradition of wearing such patches from units or nations while partnered with or training them, the YPG patches should not have been warn because of NATO ally Turkey’s views of the group, Warren said.

On Friday, a Turkish official publicly expressed dismay that the American troops were photographed wearing the YPG patches. Turkey considers the group an extension of the Kurdish Workers’ Party, or PKK, an organization recognized by Turkey and the United States as involved in terrorism. The YPG is not considered a terrorist organization by the United States, which has leaned heavily on the group in its fight against the Islamic State group in Syria.

Turkish Foreign Minister Mevlut Cavusoglu called the U.S. position on the YPG a “double standard,” and suggested American troops wear patches representing the Islamic State group, al-Qaida and other terrorist organizations, according to the Associated Press.

Warren said the special operators had been told to remove any YPG patches from their uniforms.

“The correction’s been made,” he said.

The photographs published Thursday raised questions about whether the roughly 300 American troops in Syria are on the front lines in the fight against in the Islamic State group. Pentagon and White House officials have routinely said American troops are not involved in ground combat and remain behind the forward line of troops in Iraq and Syria. The photographs showed the camouflage-clad troops moving in vehicles with YPG fighters, sporting an assortment of weaponry including an American MK47 automatic grenade launcher.

Warren said Friday that the American troops in Syria are primarily there to provide advice and assistance to Syrian Arab fighters who’ve vowed to fight the Islamic State group under the umbrella group called Syrian Democratic Forces. The SDF is largely made up of YPG fighters, but Pentagon officials have said more Arab troops have joined recently as they move toward the Islamic State group’s capital of Raqqa.

“These are some of the best soldiers in the world – these American advisers,” Warren said. “So while they’re there, there’s day-to-day how to be a soldier advice and assistance that gets passed on, too.”

The Syrican Democratic Forces announced early this week they had begun to move south toward Raqqa. Warren said the group was focused for now on liberating the countryside just north of the city from the Islamic State group. He said it was uncertain how long it would take them to reach the city.

“We’ve always been focused on kicking (the Islamic State group) out of Raqqa, and we will continue to support the SDF, particularly the Syrian Arab component as they conduct ground operations to further isolate the city,” Warren said.