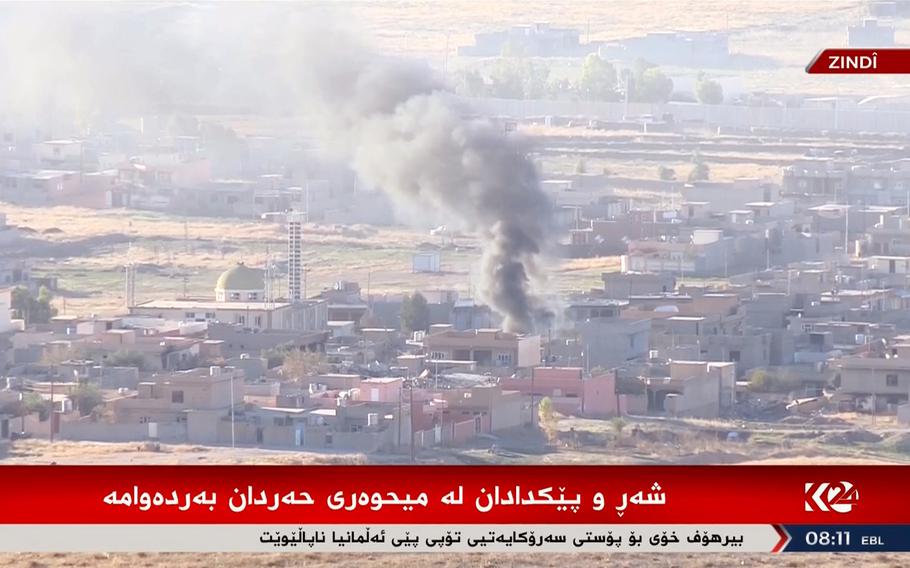 This frame grab from Kurdistan 24 video provided to The Associated Press shows smoke believed to be from an airstrike billowing over the northern Iraqi town of Sinjar on Thursday, Nov. 12, 2015. Kurdish Iraqi fighters, backed by the U.S.-led air campaign, launched an assault Thursday aiming to retake the strategic town of Sinjar, which the Islamic State overran last year. (Kurdistan 24/AP)

This frame grab from Kurdistan 24 video provided to The Associated Press shows smoke believed to be from an airstrike billowing over the northern Iraqi town of Sinjar on Thursday, Nov. 12, 2015. Kurdish Iraqi fighters, backed by the U.S.-led air campaign, launched an assault Thursday aiming to retake the strategic town of Sinjar, which the Islamic State overran last year. (Kurdistan 24/AP) 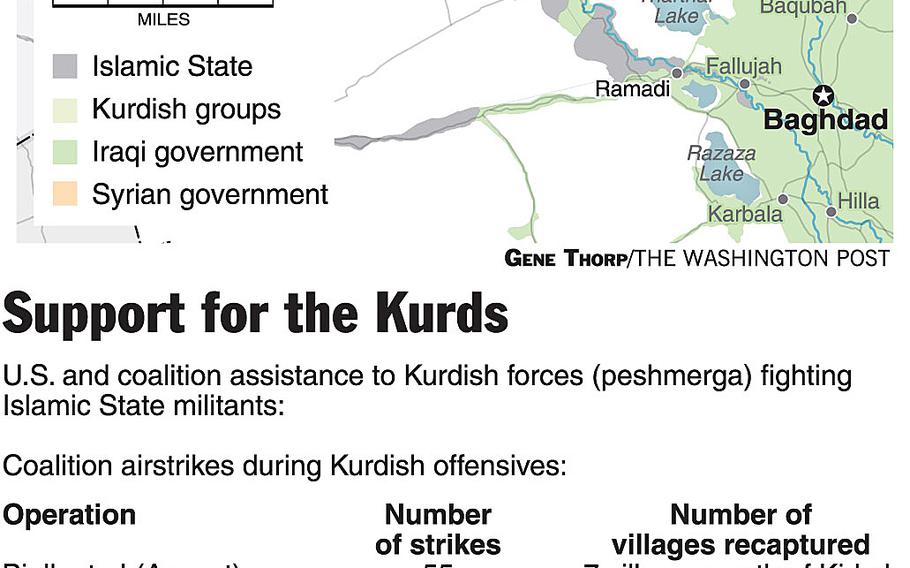 Most U.S. troops supporting the assault on the city along a key Islamic State supply route between its stronghold of Raqqa in Syria and the key northern Iraqi city of Mosul are far behind the front lines, advising high level peshmerga commanders, said Peter Cook, press secretary for the Pentagon. However, some U.S. troops are working from nearby high ground to help identify airstrike targets, he added. Cook declined to say how many American advisers were in the vicinity of Sinjar.

The Kurdish Regional Security Council announced early Thursday it would launch Operation Free Sinjar in an attempt to free the town about 30 miles from the Syrian border from the Islamic State group and cut off its control of Highway 47, which is used to move weapons, fighters and information between Iraq and Syria. The town fell into Islamic State control in August 2014, as the militants stormed across northern Iraq.

The U.S. advisers helping call in airstrikes were not operating as Joint Terminal Attack Controllers, or JTACs, but they were working side-by-side with Kurdish troops to identify targets for coalition warplanes to strike, Cook said.

JTACs directly communicate with pilots to identify targets. The special operations advisers near Sinjar are working through a chain of command to relay potential targets to the aircraft conducting strikes, a U.S. defense official said. The official spoke on condition of anonymity because he was not authorized to publicly discuss the operation.

JTACs would have to operate much closer to the fighting to effectively call in direct airstrikes, the official said. The U.S. special operators near Sinjar are essentially gathering intelligence using binoculars, he said.

“To be clear, they’re playing an active role there with the Iraqi Kurdish forces to make sure that the air power is delivered in the most effective means possible,” Cook said.

Despite the presence of the U.S. advisers, Cook said the peshmerga were firmly in the lead of the operation, and the Americans were “not directly in the line of action.”

The Kurdish fighters reported Thursday afternoon that they controlled a section of Highway 47. However, Cook said it could take some time before the 7,500 peshmerga expel the Islamic State militants from the city.

“We expect that the [Islamic State] forces will be dug in, with defensive measures in place, to try and hold this ground, so we do not expect that this is going to be an easy fight,” Cook said. “But we do have confidence in these forces, the Iraqi Kurdish forces, there who have shown their capabilities in the past, and with the support of … the coalition air campaign we think this is an opportunity to deal the [Islamic State] a blow.”