US to withdraw Patriot missile system from Turkey 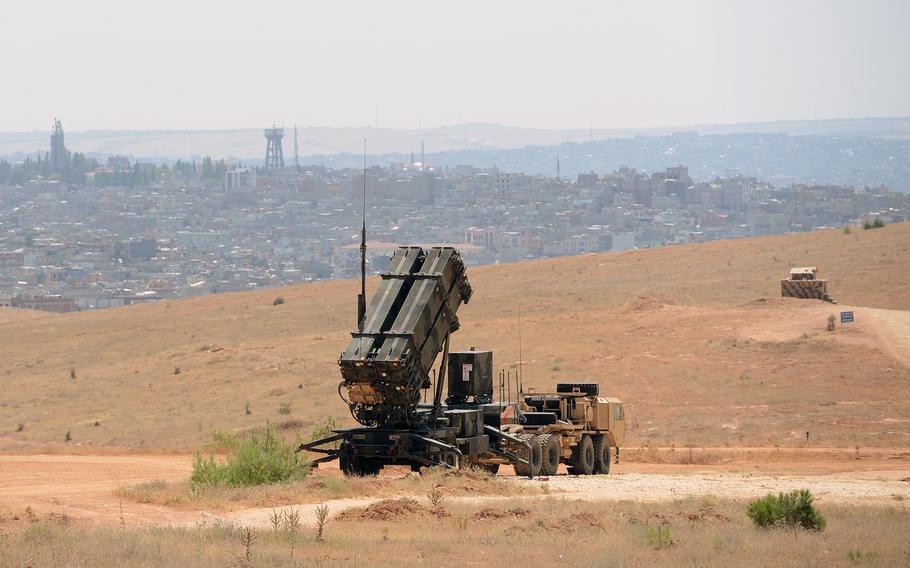 A Patriot missile launcher from the 3rd Battalion, 2nd Air Defense Artillery, overlooks Gaziantep, Turkey, and in the distance, Syria, in August 2013. Syrian opposition fighters will begin military training in May in Turkey. Fighting the Islamic State is a "priority," a Turkish official said, but the opposition force will also fight Syrian President Bashar al-Assad's military. (Michael Abrams/Stars and Stripes)

The U.S. is pulling its Patriot missiles out of southern Turkey, where American forces have been guarding Turkish airspace for nearly three years, the U.S. announced Sunday.

The Patriots will be redeployed to the States for “critical modernization upgrades” to counter evolving global threats, the U.S. embassy in Ankara and the Turkish foreign ministry said in a joint statement.

The decision to withdraw the Patriots from Turkey comes at a time when the U.S. military is building up its presence in other ways to support efforts against the Islamic State group, which operates across the Turkish border with Syria. Earlier this month, the U.S. and Turkey reached an agreement that allows the U.S. military to conduct airstrikes against the Islamic State from Turkey’s strategic Incirlik Air Base.

The Turks had long resisted the U.S.’s desire to use the base, however American drones and fighters are now conducting strikes from Incirlik, which is less than 300 miles from key Islamic State positions.

“As the United States deploys additional air assets and partners with Turkey to counter ISIL, the United States will also continue to work closely with Turkey on how to support Turkey’s air defense capabilities, including against ballistic missile risks and threats,” the U.S. embassy said.

U.S. officials emphasized the decision to pull out the Patriots is not a sign of weakening commitment to Turkey, but that the move was made after a U.S. review of its global missile defense posture. The Patriot mission will end when the current rotation of U.S. soldiers in Gaziantep concludes in October.

Germany also announced over the weekend that it will end its Patriot mission in Turkey.

The U.S. and Turkey will consult with NATO allies on other ways to bolster Turkey’s defenses, the embassy statement said. The U.S. can redeploy Patriots to Turkey within a week, if needed, and the U.S. also has Navy Aegis ships that offer an anti-missile capability in the eastern Mediterranean, according to the U.S. embassy.

In early 2013, the U.S. along with the Germans and the Netherlands deployed the anti-missile Patriot batteries to Turkey in response to concerns over a cross-border shelling incident in 2012 that left several Turks dead. Turkey blamed the Assad regime in Syria for the shellings and requested that the alliance help bolster the country’s air defenses against potential threats.

While the prime focus for the Patriot mission was to counter any missile threat emanating from Syria, none ever materialized — the U.S. and other Patriot batteries were never forced to fire their missiles.

However, during the past two years Patriots were deployed, the Islamic State group rose to prominence.

Turkey’s decision to allow U.S. strikes against the Islamic State group came after a series of attacks on Turkish territory that were blamed on the militant group, which now controls large section of territory in both Syria and Iraq.

While Turkey has long viewed countering the Assad regime as its prime strategic concern, the attacks by the Islamic State prompted Ankara to reverse course and allow the U.S. fighter jet access to the base.