US to speed up resupply of munitions for Mideast partner nations, official says 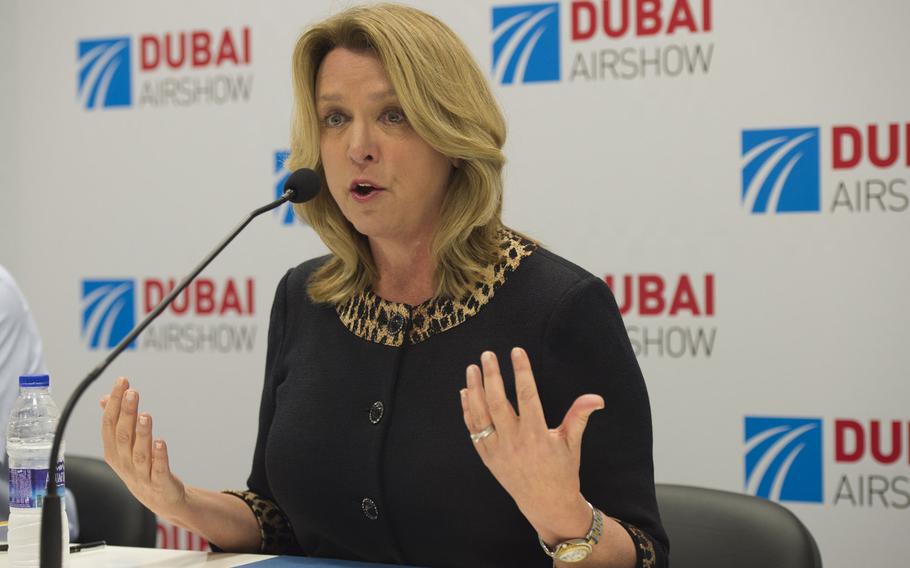 Secretary of the Air Force Deborah Lee James responds to questions about foreign military sales and the protest over the Long-Range Strike-Bomber contract, during a joint press conference at the 2015 Dubai Airshow on Tuesday, Nov. 10, 2015. (Chris Church/Stars and Stripes)

DUBAI, United Arab Emirates — The Pentagon is looking into speeding up approval of foreign military sales as allies look to replenish stocks of precision weapons they are using up in campaigns against Islamic State militants in Syria and Iraq and Houthi rebels in Yemen, Secretary of the Air Force Deborah Lee James said Tuesday.

“That’s a key message that I’m going to be taking back to Washington, and it’s one that we are working pretty hard,” she told reporters at the Dubai Airshow.

James said that in her meetings in Dubai, coalition partners have brought up the importance of replacing their inventories of precision-guided munitions.

Partners in the Persian Gulf, including the United Arab Emirates, Qatar, Saudi Arabia and Bahrain, have been conducting multiple airstrikes against the Islamic State as well as fighting the Houthi rebels in Yemen. The Saudi-led bombing campaign in Yemen has been criticized by human rights groups for killing large numbers of civilians in repeated strikes against urban targets.

James said the Air Force is taking seriously the desires of both the defense industry and partner countries for a quicker approval process.

“We need to redouble our efforts and get the message delivered back home that it is important to give much more quick consideration if at all possible,” she said. “But always guarding our most critical technologies. We can’t ever let that go.”

Beyond replenishing munitions, the U.S. and partners must plan ahead on likely future needs, James said. “It does take a certain amount of time to ramp up the industrial base to meet these needs.”

James — who was joined at the news conference by the commander of U.S. Air Forces Central Command, Lt. Gen. Charles Q. Brown Jr. — also discussed a protest by Boeing and partner Lockheed Martin with the Government Accountability Office over the selection of Northrop Grumman to build the new Long Range Strike-Bomber.

“It’s not just our belief; we had independent reviews at different levels within the Department of Defense to include a legal review. So I would like to just stand by and see what the GAO assesses.”

The GAO will have 100 days to review the contract and issue a ruling. If it finds certain discrepancies, it could ask the Air Force to redo some of the factors, but that doesn’t necessarily mean the Air Force would have to draft a new contract, James said.

James is scheduled to continue her tour around the Middle East and Africa, including stops in Kuwait, Qatar, Djibouti, Egypt and Morocco.