US to send 560 more troops for fight to recapture Mosul 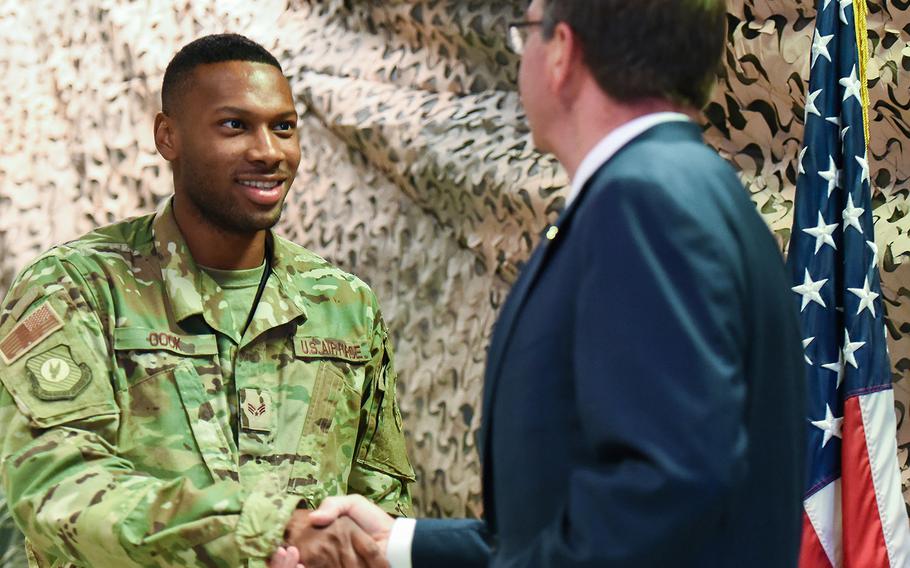 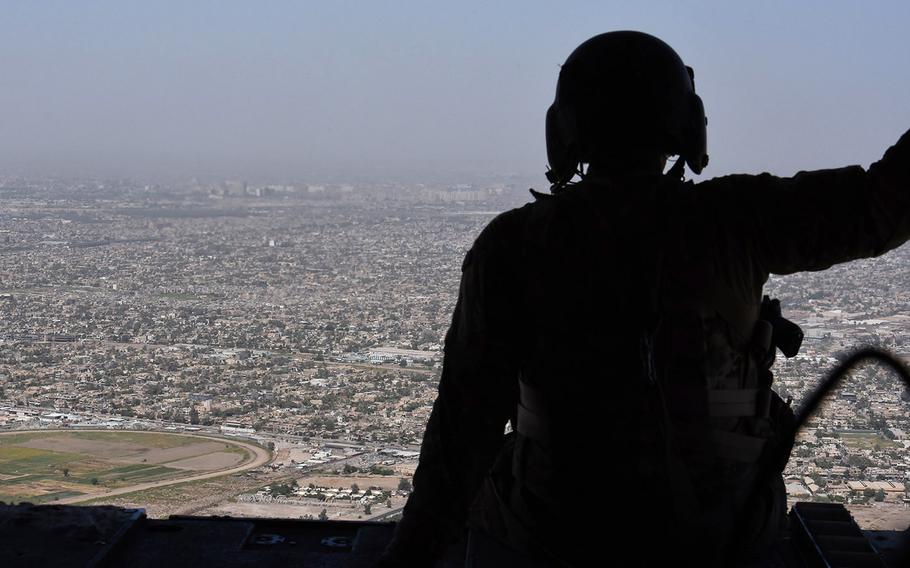 Buy Photo
A U.S. soldier looks out over Baghdad, Iraq from the back of a CH-47 Chinook helicopter on Monday, July, 11, 2016. (Corey Dickstein/Stars and Stripes) 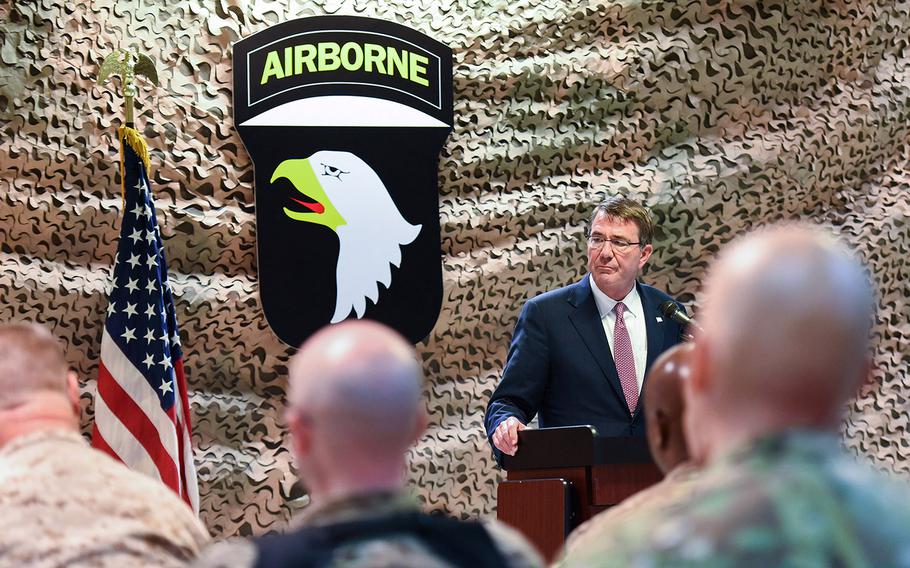 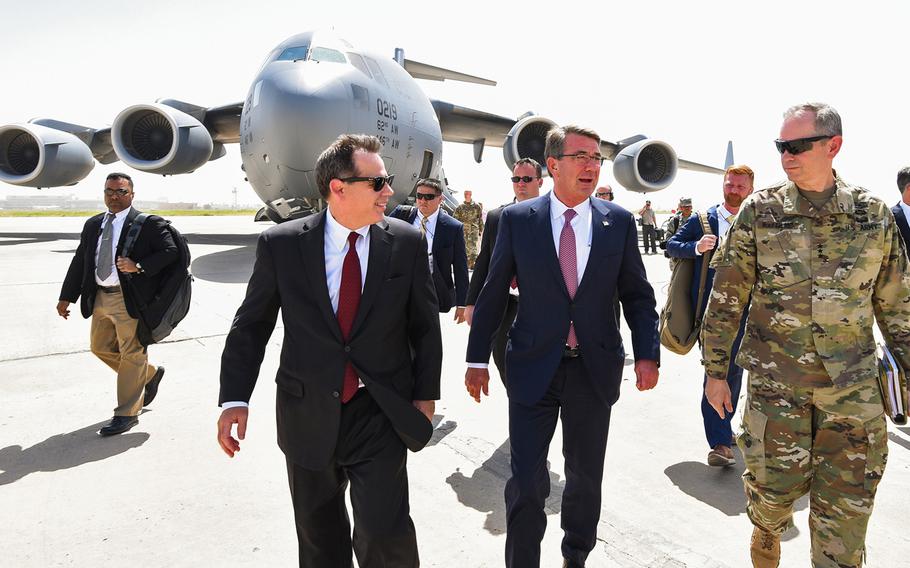 BAGHDAD — The United States will send an additional 560 troops in the coming weeks to Iraq to help that nation’s forces continue to build momentum as they push toward Mosul, Defense Secretary Ash Carter said Monday.

Carter made the announcement to a roomful of American servicemembers at Baghdad International Airport. He was in Iraq for meetings with Iraqi leaders and U.S. commanders to discuss the next steps in the anti-Islamic State group campaign. The additional troops, approved by President Barack Obama, will bring the authorized number of American servicemembers serving in Iraq to 4,657.

Just days earlier, Iraqi security forces captured a key airfield 40 miles south of Mosul that they will use as a logistics and air hub for the push up the Tigris River Valley and into the militant group’s last urban stronghold in Iraq. In the coming weeks, hundreds of the newly deploying American forces will be sent to that base, Qayara West Airfield, which housed American troops through much of Operation Iraqi Freedom, Carter said.

“At every step in this campaign, we have generated and seized additional opportunities to hasten ISIL’s lasting defeat,” Carter said, using an acronym for the militant group. “These additional U.S. forces will bring unique capabilities to the campaign and provide critical enabler support to Iraqi forces at a key moment in the fight.”

The new forces will include an airfield operations team, logistics and communications specialists, command and control elements and a security detachment, said the top American commander in Iraq, Lt. Gen. Sean MacFarland. They will not include direct advisers for Iraqi security forces.

Seizing Qayara West Airfield was a long-standing goal of the U.S.-led anti-Islamic State coalition, known as Operation Inherent Resolve, Carter told reporters traveling with him before arriving in Iraq on Monday. It will be a “vital springboard” for the fight in Mosul, he added.

Now planning turns toward encircling and eventually capturing Iraq’s second-largest city, which the Islamic State has held since the summer of 2014. That could mean an increased role for American troops as the U.S. and Iraq consider embedding advisers at smaller units for the march toward Mosul.

Carter met with Iraqi Prime Minister Haider al-Abadi and Defense Minister Khaled al-Obaidi to discuss the “next plays in the campaign” and how Inherent Resolve can continue to accelerate the Iraqi security forces’ progress. Al-Abadi agreed to the deployment of the additional American servicemembers. Carter also discussed plans for the campaign in a phone call with Masoud Barzani, the president of Iraq’s autonomous Kurdish region.

The American-trained Iraqi security forces and the Kurdish peshmerga fighters will play key roles in the slow-moving Iraqi campaign to regain Mosul.

Iraqi troops are moving toward Mosul from the south, while the Kurdish troops prepare to assault from the north. Carter and other military officials in Baghdad declined to provide details about the plans for the operation.

Al-Abadi told Carter he hopes to seize the city of 2.5 million people by the end of the year, but there remains a lot of work to be done. Mosul was captured by the Islamic State group in a lighting offensive in June 2014.

The capture of the Qayara airfield last week was the latest in a series of Iraqi victories over the Islamic State group, including the liberation of the towns of Ramadi, Fallujah, Beiji and Hit.

Qayara, which includes a runway about 2 miles long that can support a C-5 Galaxy, was used by American forces between 2003 and 2010, when it was known as “Key West.”

Defense officials, who spoke on condition of anonymity to discuss planning, described the operation to retake the airfield as the largest armor movement by the Iraqi army since it invaded Kuwait under Saddam Hussein in 1990. But the Islamic State group fighters put up little resistance, military officials said.

A small team of U.S. troops surveyed the airfield after its capture but did not remain at the base, another official said. The troops found the base damaged, but military officials said it was not immediately clear how extensive the destruction is or how much work was necessary to prepare it for use.

MacFarland and Carter compared the eventual use of Qayara West Airfield to how U.S. and Iraqi forces have used Makhmour in the east.

That’s where America Marines established an artillery fire base to support Iraqi units as they moved north. A Marine was killed there in an Islamic State rocket attack in March. Two other Americans —a Navy SEAL and a Delta Force soldier — have also been killed in action in Iraq in the last year.

In April, when Carter last visited Iraq, he announced the agreement to allow American troops to advise and accompany Iraqi forces at the brigade and battalion levels, along with the offensive use of American AH-64 Apache attack helicopters. Apaches have fired only once on Islamic State positions, and except on rare occasions, U.S. advisers have not been used at the brigade or battalion level to date.

Embedding advisers at those smaller units, Carter said, has not been needed so far. But one of the senior defense officials said they would be especially useful closer to Mosul for complex operations. The official cited, as an example, bridging operations to push into the city where Islamic State militants have destroyed many of the bridges.

Carter also discussed such issues as security concerns in Baghdad and allegations of violence against Sunni civilians around Fallujah committed by the Shiite-dominated militias known as Popular Mobilization Units. The Islamic State has hit the Iraqi capital in recent months with a series of terrorist attacks, mostly suicide bombings against civilians. A massive truck bomb July 3 in a mostly Shiite neighborhood was the deadliest attack in Iraq since the U.S. invasion in 2003. It killed more than 185 people and wounded hundreds more.

Some U.S. Military officials in Baghdad said they were concerned the Iraqis might elect to pull forces back from the fight in Iraq’s north to protect the capital, but so far they have not done so.

Carter said he and al-Abadi did not discuss that possibility, but he offered the prime minister the support of an American counter-improvised bomb program.

The defense secretary will meet next with the defense ministers from each of the OIR coalition countries, including Iraq’s, in Washington to continue discussing the anti-Islamic State group efforts.