US to drop humanitarian aid in Iraq, air strikes being considered 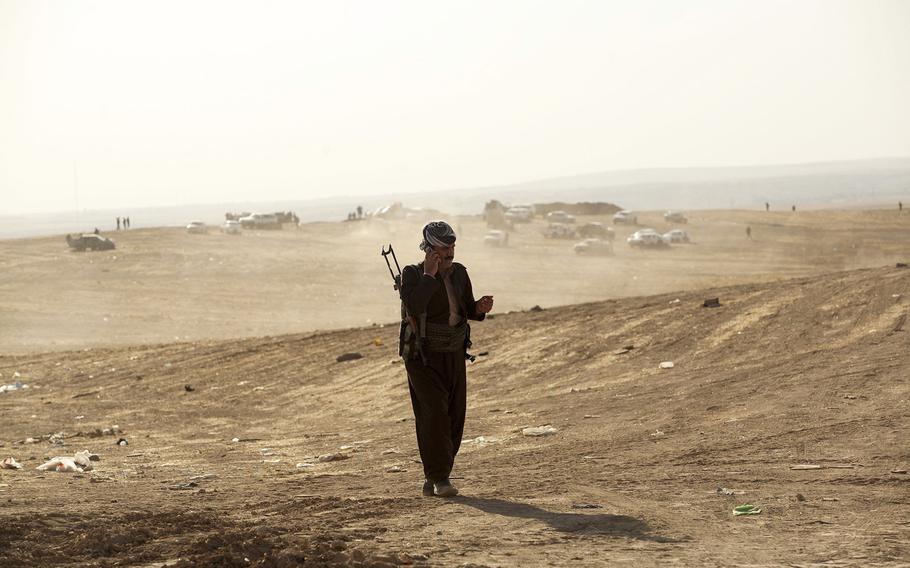 Kurdish Peshmerga gather at the front lines in Kalak, west of the Iraqi Kurdish capital Irbil, facing militants from the Islamic State just a little over a mile away on Aug. 7, 2014. Hundreds of regular soldiers have been joined by retired peshmerga and volunteers to protect the capital. (Mitchell Prothero, McClatchy Washington Bureau/MCT)

The officials, who spoke on condition of anonymity because they weren't authorized to discuss the matter, said that President Barack Obama has not yet decided whether Iraq airstrikes would be combined with the humanitarian airdrops, but a decision could come as early as Thursday night.

In recent days, Islamic militants have attacked Kurdish positions and have reportedly advanced within a few miles of Irbil, where about 40 U.S. military advisers are manning a joint operations center.

There is concern in Washington that those troops could be endangered by Islamic State fighters.

“We have airpower options overhead,” including armed planes and intelligence, surveillance and reconnaissance aircraft to locate targets, a U.S. official told Stars and Stripes Thursday on condition of anonymity. “We always maintain the option to protect U.S. personnel if they’re threatened.”

The New York Times reported Thursday evening that Kurdish officials have claimed that American military airstrikes are already underway. But the Defense Department denied that such an operation is being conducted.

Pentagon officials have said that it could be challenging to target Islamist State fighters because they are often mixed in with Iraqi civilians. However, a U.S. official told Stars and Stripes that the militants are “vulnerable” to airstrikes when they are massed in stationary positions or traveling in convoys.

As they press their attacks, Islamic State members have forced religious minorities in northern cities to flee their homes. Many members of the Yazidi sect are trapped on a mountain with little food or water.

“The Pentagon has worked options to address the potential humanitarian crisis at [Mount] Sinjar,” the official told Stars and Stripes on condition of anonymity.

The Pentagon has already been assisting Iraqi government efforts to help those in distress and is prepared to become directly involved in relief operations.

“We have been working urgently and directly with officials in Baghdad and Irbil to coordinate Iraqi airdrops to people in need,” another defense official said in a statement to Stars and Stripes on condition of anonymity. “The government of Iraq has initiated air drops in the region and we are in constant communication with them on how we can help coordinate additional relief, enhance their efforts, and provide direct assistance wherever possible.”

Although the Mount Sinjar area is very rugged, a U.S. official expressed confidence that the Air Force could successfully supply the trapped Yazidis.

“Our capabilities are extraordinary advanced when it comes to precision airdrops,” the official said.

The Obama administration, which withdrew American forces from Iraq in 2011, has long ruled out sending ground combat troops back into the country.