US to deploy small group of commandos to Syria 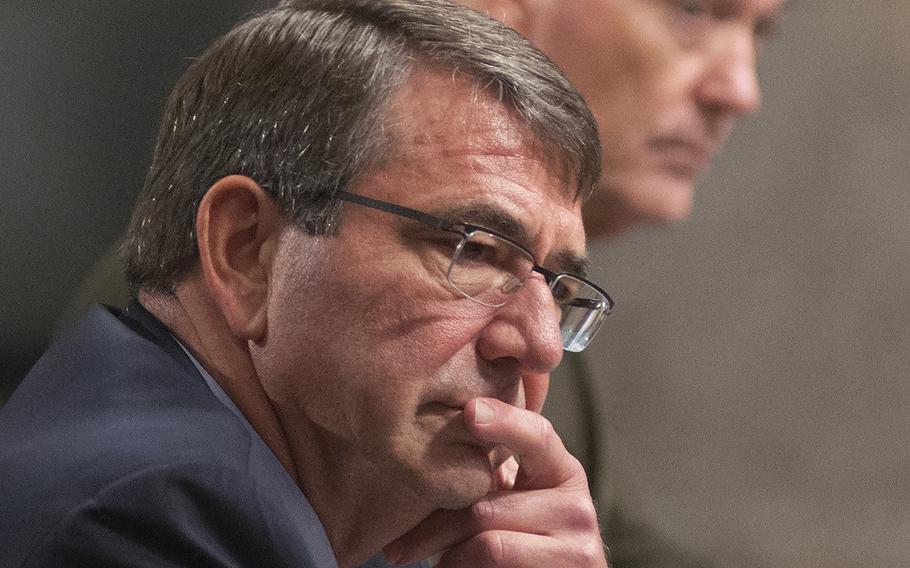 Buy Photo
Secretary of Defense Ash Carter listens to comments during a Senate Committee on Armed Services hearing on Capitol Hill in Washington, D.C., on Tuesday, Oct. 27, 2015. During the hearing, Carter said raids like the one in Iraq involving U.S. troops likely will be a part of the U.S. strategy in the region. (Carlos Bongioanni/Stars and Stripes)

WASHINGTON — A small group of U.S. special operations forces will be sent into northern Syria to work with local rebel forces in the fight against Islamic State militants, the White House announced Friday.

President Barack Obama authorized less than 50 U.S. troops to deploy to Syria to work openly with ground forces in the war-torn country, said Josh Earnest, spokesman for the White House.

“Our strategy in Syria hasn’t changed,” he said. “The core of our military strategy inside of Syria is to build up the capacity of local forces to take the fight to [the Islamic State] on the ground in their own country.”

The announcement marks the first time U.S. troops have been based in Syria as well as an escalation in U.S. efforts against the Islamic State, which controls a large part of the country’s northern region. The United States has been conducting airstrikes on militant targets in Syria for more than a year. But earlier this month, it abandoned a training program in the country, after its efforts produced only a handful of combat-ready rebels.

Yet Earnest said Friday the president authorized the deployment of troops to Syria based on successes realized on the battlefield by local groups fighting the Islamic State in the north.

“We’ve already seen progress for these local opposition forces,” he said, noting the success Kurdish fighters had this summer in driving the Islamic State out of Kobani and the Syrian Arab Coalition’s assent to within 45 miles of the Islamic State stronghold Raqqa. “That’s precisely the reason the president is choosing to intensify our support for them.”

Secretary of Defense Ash Carter left the door open for additional special forces if the initial deployment is effective.

"We are going to continue to innovate, to build up what works," Carter said Friday in Alaska as he travels on an eight-day trip through Asia. "As we develop new opportunities to support capable and motivated forces we will consider those; we will make recommendations to the president."

However, American special operators in Syria would be there only to advise and assist local ground units, Earnest emphasized.

“They are not being deployed to Syria with a combat mission,” he said.

The U.S. forces being deployed to Syria will not embed with the local forces as they engage Islamic State militants, said a senior defense official, who was not authorized to discuss the matter publicly and spoke on the condition of anonymity.

The special operators will be initially based at headquarters established by anti-Islamic State factions. They will work directly with the local groups, including the Kurds, the Syrian Arab Coalition and Turkmen, to improve their tactics, logistical capabilities and abilities to plan operations, the official said.

“The whole point of this exercise is to get on the ground, see what’s there, see what we can work with, and then move out from there,” the official said. “We’re not ruling anything out at this point.”

Earnest said some efforts by the United States to combat the Islamic State, such as the scrapped rebel training program, have not been successful. This has led the Obama administration to search for other ways to defeat the militant group, which also has taken control of large portions of Iraq.

Those steps include working with the Iraqi government to establish a special operations task force to target Islamic State leaders directly, to enhance U.S. assistance to Jordan and Lebanon in their Islamic State fight, and to deploy additional air assets into the region.

About one dozen F-15 Strike Eagles will be moved soon to Incirlik Air Base in southern Turkey to join a group of 12 A-10s that were sent to the base last week. The United States will use those additional warplanes to escalate its bombing campaign in northern Syria, where in recent weeks it has conducted few airstrikes.

Earnest maintained the U.S. role in Iraq and Syria, under Operation Inherent Resolve, will not shift toward a combat mission, which has been questioned in that past week since Army Master Sgt. Joshua L. Wheeler was killed during a U.S.-Kurdish peshmerga raid of an Islamic State prison in northern Iraq. Wheeler was the first U.S. combat death in that country since 2011.

“These forces do not have a combat mission,” Earnest said Friday of the special operators in Iraq and the others who will soon deploy to Syria. “This is a dangerous place on the globe. They are at risk, and there is no denying that… Nobody is more keenly aware of that than the commander in chief.”

Raids likely will be a part of the U.S. strategy moving forward, Carter said Tuesday to the Senate Armed Services Committee. He conceded such operations are combat actions, though the mission remains to train and advise.

Carter also said Friday he does not plan to discuss safety protocols with the Russians, who are conducting airstrikes in Syria aimed to buoy President Bashar Assad’s regime in the country’s five-year civil war. He said U.S. forces will operate on the ground in Syrian Kurdish territory where Russia has not been flying airstrikes.

While U.S. troops are likely to conduct raids in Syria, the senior defense official said, the special operators stationed in the country’s northern region will not participate in such missions. Those raids likely would be conducted by special operators based in Iraq.