US to cut thousands of troops from Iraq, Afghanistan in coming months 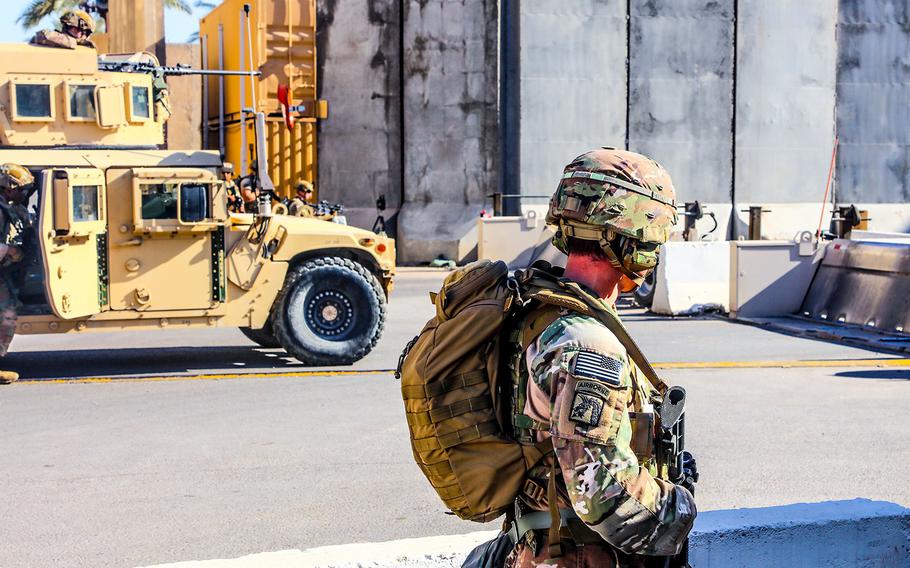 U.S. soldiers from 1st Brigade, 25th Infantry Division, Task Force-Iraq, take up defensive positions at Forward Operating Base Union III, Baghdad, Iraq, Dec. 31, 2019. About an hour after rocket attacks were reported on Saturday, Jan. 4, 2020, a U.S. official tweeted that “all clear” had been sounded at Union III, a base inside the zone that houses coalition troops in Baghdad. (Desmond Cassell/U.S. Army)

WASHINGTON — The United States will withdraw almost half of its troops from Iraq this month and make a similar cut to its force in Afghanistan by November, the top U.S. general overseeing operations in the Middle East announced Wednesday.

The decisions were announced by Marine Gen. Kenneth McKenzie, commander for U.S. Central Command, during a visit to Baghdad almost exactly six years after the United States first launched military operations against the Islamic State along the Iraq-Syria border. They also come as President Donald Trump has continued to denounce U.S. involvement in long-running wars in the Middle East and Afghanistan, from which he vowed to disentangle U.S. troops since his 2016 election campaign.

“In recognition of the great progress the Iraqi forces have made and in consultation and coordination with the government of Iraq and our coalition partners, the United States has decided to reduce our troop presence in Iraq from about 5,200 to 3,000 troops during the month of September,” McKenzie said during a U.S. military ceremony in Baghdad. “This reduced footprint allows us to continue advising and assisting our Iraqi partners in rooting out the final remnants of ISIS in Iraq and ensuring its enduring defeat.”

The general was less specific on Afghanistan drawdown plans, which he shared after the Iraq announcement with a small group of reporters on a phone call, a defense official confirmed. McKenzie’s new plan accelerates the ongoing drawdown in Afghanistan, aiming to reduce the 8,600 troops there to some 4,500 “by the late October-November time frame,” the official said.

McKenzie has been clear that he believes the United States must retain some troops in Iraq to aid the ongoing ISIS fight and in Afghanistan to fight terrorist groups there, including the Afghan branch of ISIS.

While U.S.-backed troops in Iraq — primarily, the Iraqi military — and militia forces in Syria known as the Syrian Democratic Forces have ousted ISIS from the vast territory that the terrorist group once controlled across eastern Syria and northern Iraq, the group remains a threat in both countries. Officials believe the group retains tens of thousands of fighters, largely in underground sleeper cells. McKenzie said last month that he believes ISIS leaders aim to retake the territory that the group lost.

Three weeks ago, Trump hosted new Iraq Prime Minister Mustafa al-Kadhimi at the White House, where the two leaders were said to be negotiating a withdrawal of at least some American forces. In public remarks, Trump said he hoped to remove American troops from Iraq soon. Al-Kadhimi, however, requested the United States retain some troops in his country.

“At some point, we obviously will be gone,” Trump said during the Aug 20 meeting. “And, we look forward to the day when we don’t have to be there, and hopefully Iraq can live their own lives and they can defend themselves, which they’ve been doing long before we got involved.”

The United States has maintained about 5,200 troops in Iraq for most of the past six years since it first began a bombing campaign against ISIS in September 2014 that expanded to a ground operation by the end of that year. Former President Barack Obama ordered troops to return to Iraq for the first time since the last American forces left the country at the end of 2011, also during his administration.

The troops were sent primarily to train and advise Iraqi and Syrian forces to conduct the brunt of the fighting against the terrorists, whose brutality captured the attention of leaders across the world. Nonetheless, American troops fought on the front lines at times, and at least 21 U.S. service members have been killed and another 231 wounded in action fighting ISIS in Iraq and Syria since 2015.

Pentagon officials in recent years have acknowledged there were at times far more than 5,200 American troops in Iraq, though that number stood as the highest official count throughout anti-ISIS operations. Another 2,000 or so troops were operating simultaneously in neighboring Syria, where several hundred U.S. troops now remain, according to Pentagon officials. At the height of American operations in Iraq under former President George W. Bush, the U.S. boasted some 150,000 troops there.

In recent months, Pentagon officials have said the count of roughly 5,200 troops in Iraq was accurate. The U.S. military in recent months has closed down operations on several smaller outposts throughout Iraq, handing those over to Iraqi forces and consolidating mostly on larger bases. That has come, at least in part, because of the near-constant threat of rocket and mortar attacks by pro-Iranian militia in Iraq, who aim to push U.S. service members out of the country and the region.

McKenzie said last month that the attacks and other Iranian-supported operations in Iraq have served as a distraction from the ISIS fight, and they forced the United States to reposition resources to protect its troops from attacks from Iran or its proxies.

In his Wednesday remarks, McKenzie hinted the United States would not fully withdraw from Iraq in the near future, where there remained “much work to be done.”

“The U.S. decision is a clear demonstration of our continued commitment to the ultimate goal, which is an Iraqi Security Force that is capable of preventing an ISIS resurgence and of securing Iraq’s sovereignty without external assistance,” he said. “The journey has been difficult, the sacrifice has been great, but the progress has been significant.”

White House officials told some reporters late Tuesday of the Wednesday plan to announce the Iraq drawdown. They also telegraphed McKenzie’s announcement on the withdrawal of troops from Afghanistan, multiple news outlets reported.

Earlier this year, the United States began withdrawing troops from Afghanistan after striking an unprecedented peace accord with the Taliban in February. The U.S. has already downsized from some 14,000 troops there to less than 8,600 during the summer.

Pentagon officials said last month that they were working to further downsize its force in Afghanistan to less than 5,000 troops by the end of November, but Trump has repeatedly said he wanted to see such reductions by Nov. 3, which is Election Day.

Trump, at the urging of his then-advisers, ordered thousands of new troops to Afghanistan in August 2017, and loosened Obama-era restrictions that largely had kept them off the front lines. But Trump has continued to rail against continuing operations in Afghanistan.

After reaching a deal with the Taliban in February, the U.S. quickly began to move some troops out of the country. Pentagon officials said last month that they intended to draw down to about 5,000 troops by the end of November. McKenzie’s announcement Wednesday appears to slightly accelerate that timeline.

U.S. military officials have said the drawdowns will be based on needed capabilities and not on numbers of troops. But McKenzie said ultimately such decisions must be made by the president.