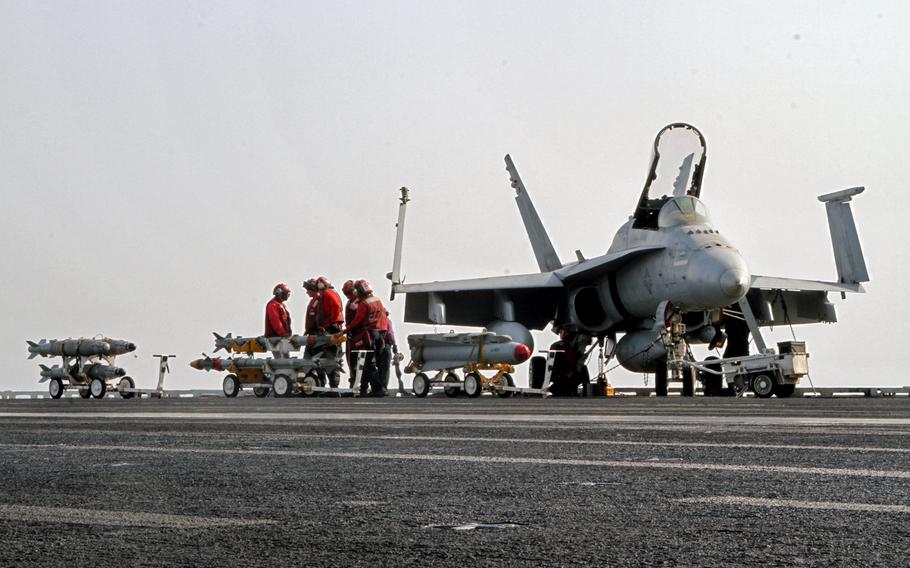 Aviation ordnancemen move bombs and missiles across the flight deck of the USS George H.W. Bush, underway in the Persian Gulf, Aug 10, 2014. F/A 18s are among launched from the Bush are among aircraft conducting air strikes in Iraq. (Hendrick Simoes/Stars and Stripes)

The United States has expanded its air campaign in Iraq, striking Islamic State targets near the strategic Mosul Dam for a third day Monday and using land-based bombers.

More than half of the 68 airstrikes the U.S. has conducted over Iraq since President Barack Obama authorized them Aug. 7 have been around the dam in support of Iraqi forces, according to U.S. Central Command. Fifteen of these were on Monday; 14 were on Sunday.

With the help of U.S. firepower Kurdish and Iraqi forces had largely regained control of the Mosul Dam, Iraqi officials said, cited by The Associated press. The Islamic State on Monday, however, disputed those claims.

Militants with the Islamic State group had seized the dam less than two weeks ago, pushing out Kurdish forces, known as peshmerga.

Meanwhile, a Kurdish official told the AP that the peshmerga had withdrawn from the complex because it was heavily rigged with explosives.

President Barack Obama, in a letter to Congress on Sunday, authorized the latest round of strikes, saying the order was aimed at protecting a key piece of Iraqi infrastructure and helping local fighters in their campaign to push back Islamic militants who have taken over large portions of the country. Until now, the air campaign had been focused on humanitarian aid and protecting U.S. personnel in the Kurdish regional capital, Irbil, and in Baghdad.

“These military operations will be limited in their scope and duration as necessary to support the Iraqi forces in their efforts to retake and establish control of this critical infrastructure site, as part of their ongoing campaign against the terrorist group the Islamic State of Iraq and the Levant,” Obama said.

The U.S. military used a mix of aircraft to carry out attacks on Sunday and Monday, including fighters, bombers and drones, U.S. Central Command said.

CENTCOM did not say how many bombers were used each day or where they came from, but Sunday’s deployment of such aircraft could mark the first time major land-based aircraft were brought to the operation. The U.S. maintains B-1 bombers at al-Udeid Air Base in Qatar.

So far, the USS George H.W. Bush, operating out of the northern Persian Gulf, has been the key launching pad for strikes.

Since the U.S. began its air campaign more than a week ago, Kurdish fighters have been making modest gains against Islamic State fighters, who were threatening to make incursions into Iraq’s semi-autonomous Kurdish region.

Initially, the strikes were aimed at breaking the militants’ hold around Mount Sinjar, where thousands of starving minority Yazidis were trapped and facing potential execution by the militants. The other focus was on protecting U.S. interests around Irbil. The strikes helped Kurdish fighters reclaim some towns.

The attacks around the Mosul Dam, however, signal the U.S. mission is deepening.

What comes next isn’t clear. The Obama administration has said that it will consider more support to the country if a more inclusive government forms in the wake of Prime Minister Nouri al-Maliki’s pending resignation.

That could include the rearming of the Iraqi army, which lost stockpiles of weapons earlier this year when it fled Islamic State fighters moving into Mosul and other parts of the country. Already, the U.S. and other nations have begun supplying arms to Kurdish fighters in the north.

The U.S. has ruled out sending in ground forces to lead the fight against the Islamic State group, which in June declared it ruled a caliphate stretching from Syria into western Iraq.

Humanitarian aid continues to flow into northern Iraq, even as the United States has called off air drops into the embattled region for the time being.

The Polish air force trained last week with deployed U.S. airmen from Europe on air-drop techniques from C-130 aircraft. Despite the training, the Polish air force does not plan to carry out such a mission because it is “too risky,” said Lt. Col. Arthur Golawski, acting spokesman for the Polish Armed Forces General Command.