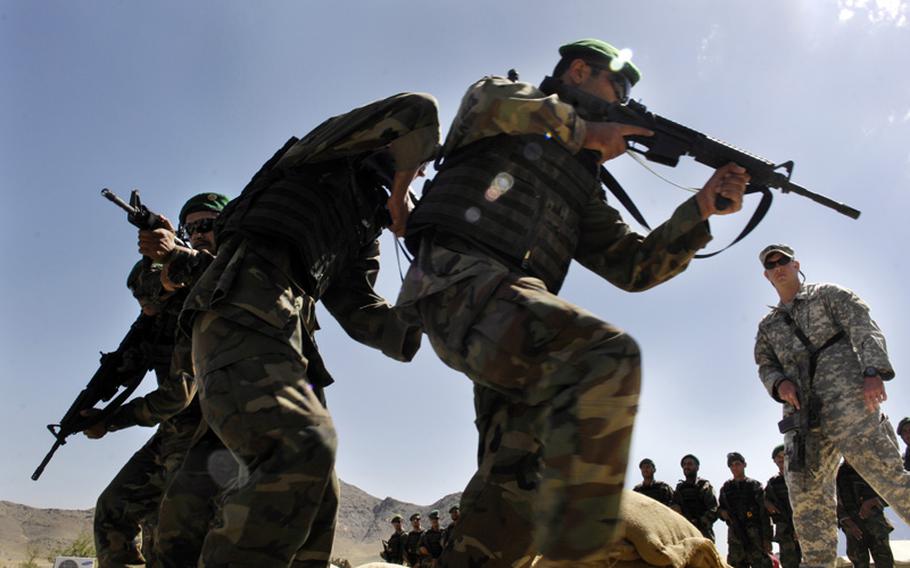 A U.S. servicemember trains Afghan troops at a training camp in Kabul, Afghanistan, in June 2007. On Wednesday, April 8, 2015, an Afghan soldier opened fire on coalition troops killing a U.S. servicemember and wounding at least two others. (Cherie A. Thurlby/Department of Defense)

KABUL, Afghanistan — An Afghan soldier opened fire Wednesday on U.S. soldiers in eastern Afghanistan, killing one and wounding several others in the first hostile fire death suffered by the U.S. military since the end of the NATO combat mission, officials said.

The attack occurred after a meeting between U.S. Embassy officials and local Afghan leaders at the provincial governor’s home in Jalalabad, said Hazrat Hussain Mashraqiwal, police spokesman for Nangarhar province.

The Afghan soldier suddenly fired on troops providing security for the Embassy team. He was killed when security team members returned fire, Mashraqiwal said. None of the U.S. diplomats was injured, the embassy said.

Pentagon spokesman Col. Steve Warren confirmed the fatality was an American soldier and that “several” U.S. soldiers were wounded. The wounded were taken to regional medical facilities, Warren said. He said he didn’t know how seriously they were injured.

It was the first hostile fire death suffered by the U.S. military since NATO ended its combat role in Afghanistan at the end of last year and shifted to a training and assistance mission known as Operation Resolute Support. Two 1st Cavalry Division soldiers were killed Dec. 12 by an IED in Parwan province. Three American civilian contractors were killed by an Afghan soldier Jan. 29 at Kabul airport.

Mashraqiwal also said a police officer had been detained for questioning in connection with Wednesday’s shooting. He said the policeman was not in Jalalabad at the time of the attack and provided no further details as to the officer’s involvement.

Afghan Gen. Fazel Ahmad Sherzad, who is police chief for eastern Nangarhar province where the shooting happened, said it took place immediately after the meeting in the governor’s compound and the embassy official had left.

“Right after the U.S. official had left, suddenly an Afghan army soldier opened fire on the U.S. soldiers who were present in the compound,” Sherzad told The Associated Press.

Warren said it was premature to describe the shooting as an “insider attack” but “indications are leaning that way.”

The Taliban-affiliated terrorist group Hezb-i-Islami claimed responsibility for the shooting. The group's spokesman, Zubair Sediqi, said the shooter was their agent inside the ANA unit based in Nangarhar.

The assailant was a member of the Afghan army unit based out of Jalalabad Airfield, assigned to partner with coalition forces to provide security to the visiting U.S. Embassy delegation, Sediqi said Wednesday.

The Associated Press, Zubair Babakarkhail and Stars and Stripes reporter Jon Harper contributed to this report.