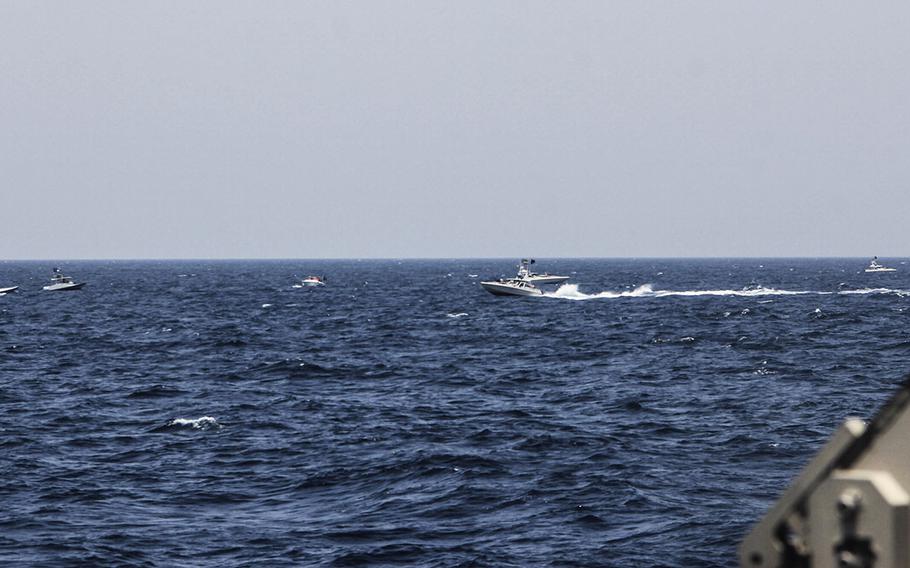 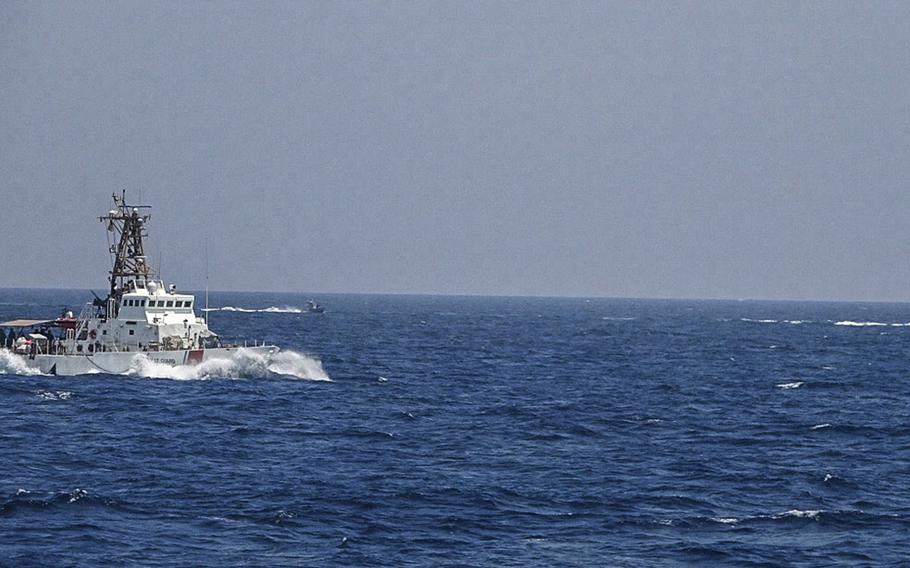 wo Iranian Islamic Revolutionary Guard Corps Navy fast in-shore attack craft, a type of speedboat armed with machine guns, conducted unsafe and unprofessional maneuvers while operating in close proximity to USCGC Maui as it transits the Strait of Hormuz with other U.S. naval vessels, May 10, 2021. (U.S. Navy)

WASHINGTON — A Coast Guard cutter fired shots at a group of Iranian fast-attack boats in the Strait of Hormuz as the boats quickly approached several U.S. warships traveling into the Persian Gulf, the chief Pentagon spokesman said Monday.

The USCGC Maui fired about 30 warning shots Monday when 13 vessels of Iran’s paramilitary Revolutionary Guard Corps came too close to the U.S. ships and “conducted unsafe and unprofessional maneuvers and failed to exercise due regard for the safety of U.S. forces as required under international law,” John Kirby told reporters at the Pentagon.

“This is the kind of activity that could lead to somebody getting hurt and can lead to a real miscalculation there in the region and that doesn't serve anybody's interests,” he said.

“Sadly, harassment by the IRGC Navy is not a new phenomenon,” Kirby said. “It is something that all our commanding officers and crews of our vessels are trained for when serving in the [U.S.] Central Command area of responsibility, particularly in and around the Gulf.”

On Monday, the Maui, patrol ship USCGC Wrangell, guided-missile cruiser USS Monterey and coastal patrol ships USS Thunderbolt, USS Hurricane and USS Squall were escorting the guided-missile submarine USS Georgia, which had surfaced to transit the strait, when the Iranian boats approached the formation at high speeds, the Navy said in a statement.

Two of the boats then broke off and approached the U.S. ships from behind at about 37 mph “with their weapons uncovered and manned,” according to the Navy, which described the Iranian vessels as “a type of speedboat armed with machine guns.”

With the U.S. ships sandwiched between the two groups of Iranian boats, the Maui and Squall attempted to use “all the appropriate and established procedures,” such as horn blasts and bridge-to-bridge radio transmission before resorting to the warning shots, Kirby said.

Maui fired rounds from a .50-caliber machine gun when the Iranian boats came within 300 yards, and again when they came within 150 yards of the U.S. group, Kirby said.

“After the second round of warning shots, the 13 fast-attack craft from the IRGCN broke contact,” he said.

Kirby said it was “not insignificant” that the tense exchange happened in the busy strait that connects the Persian Gulf to the Gulf of Oman and the Arabian Sea. The channel is a “vital maritime pathway for crude oil transport,” according to the CIA factbook.

“It’s an international waterway and of course when you’re in the strait, there are certain limits to your ability to maneuver,” Kirby said. “I mean, it is a choke point in the region.”

Prior to the April encounter, it had been nearly four years since the last time that U.S. ships fired warning shots against Iranian boats when the Thunderbolt did so to warn off a Revolutionary Guard vessel in July 2017 that came within 68 yards of it, according to an Associated Press.

“I think we've seen now in this second incident, (commanders) are very stringent about following the proper procedures for providing warnings verbally first, and then if need be, through the use of warning shots to try to change and to mitigate the Iranian behavior.”

Last year, the Navy issued regulations allowing commanders to take “lawful defensive measures” against ships in the Middle East that come within 100 yards of its warships.

Though Monday’s incident did not breach that boundary, Kirby said Navy commanders “have the means at their disposal to defend their ships and their crews.”