US set to sign peace deal with Taliban in Doha 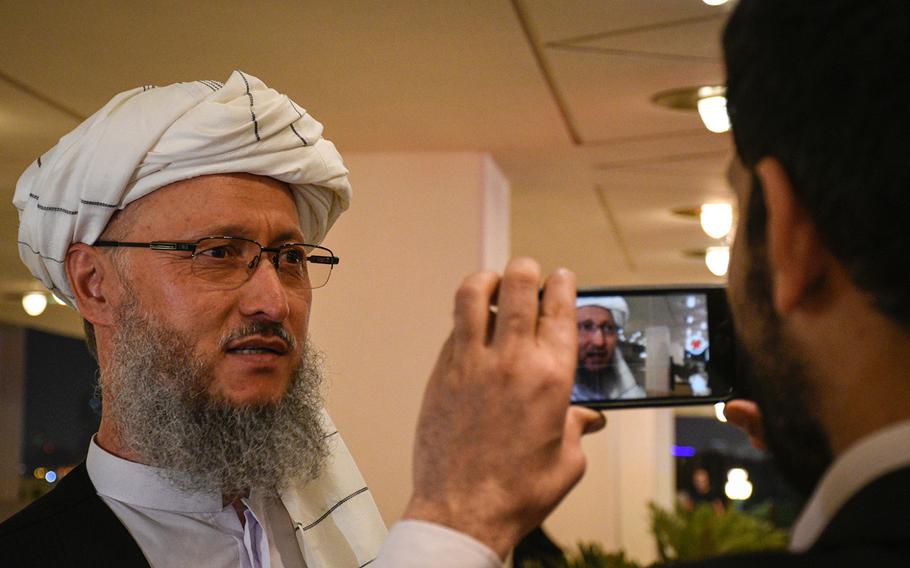 Buy Photo
Taliban official Abdul Salam Hanafi speaks to reporters in Pashto and Dari on the eve of a historic agreement between the militant group and the United States in Doha, Qatar, Feb. 28, 2020. (J.P. Lawrence / Stars and Stripes)

Buy Photo
Taliban official Abdul Salam Hanafi speaks to reporters in Pashto and Dari on the eve of a historic agreement between the militant group and the United States in Doha, Qatar, Feb. 28, 2020. (J.P. Lawrence / Stars and Stripes) 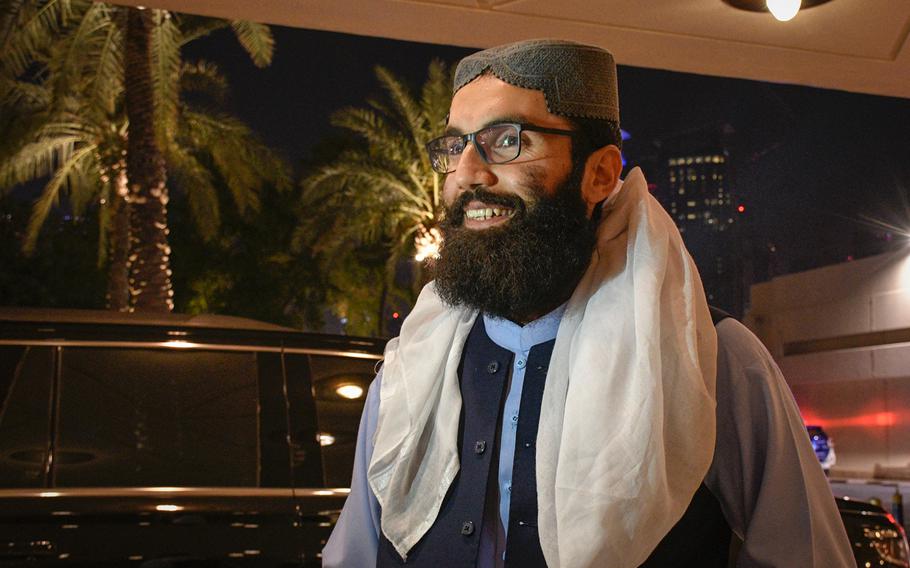 Buy Photo
High-ranking Taliban official Anas Haqqani, younger brother of the Taliban's deputy chief, speaks to reporters on the eve of a historic agreement between the militant group and the United States in Doha, Qatar, Feb. 28, 2020. (J.P. Lawrence / Stars and Stripes) 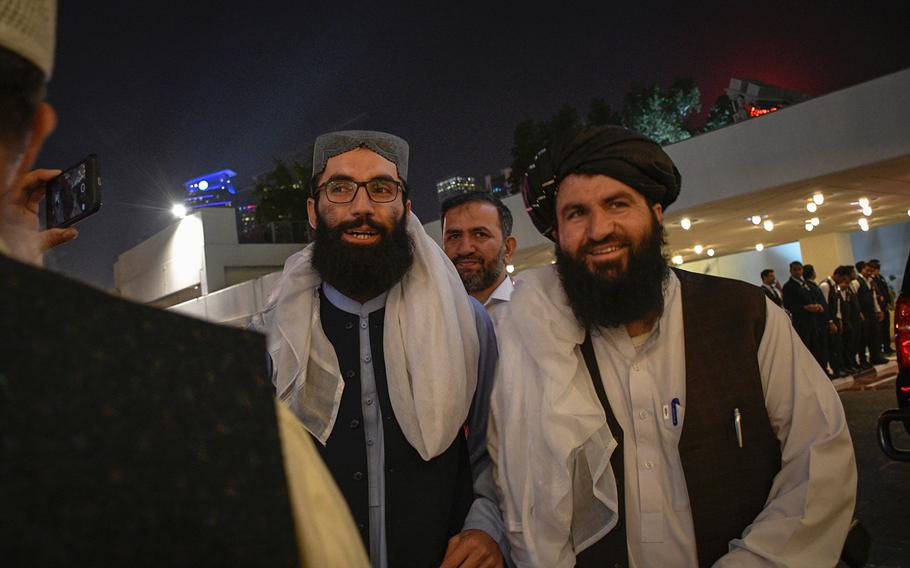 Buy Photo
High-ranking Taliban official Anas Haqqani, left, and a press aide for the group meet with reporters on the eve of a historic agreement between the militant group and the United States in Doha, Qatar, Feb. 28, 2020. (J.P. Lawrence / Stars and Stripes) 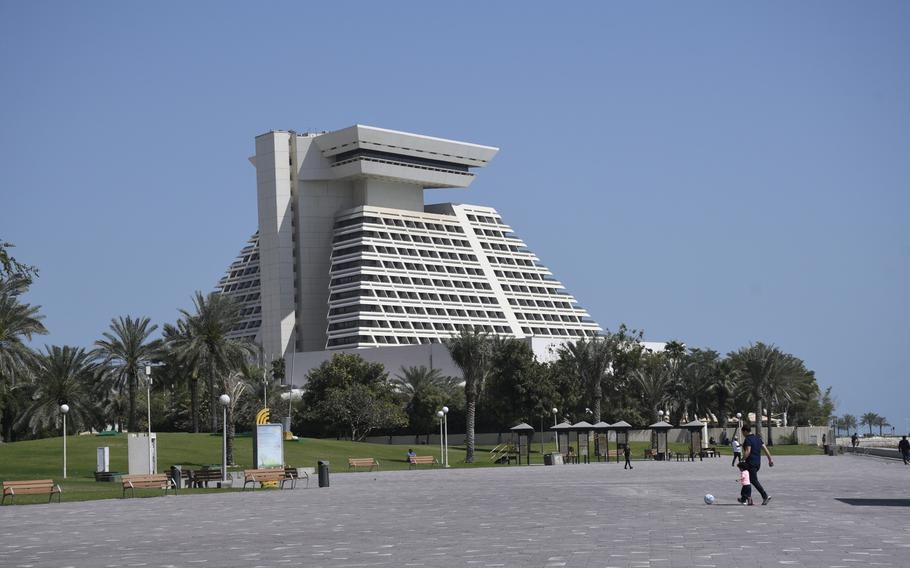 Buy Photo
The Sheraton Grand Doha in Qatar, where U.S. and Taliban officials are expected to sign a peace deal on Saturday, Feb. 29, 2020. (J.P. Lawrence/Stars and Stripes) 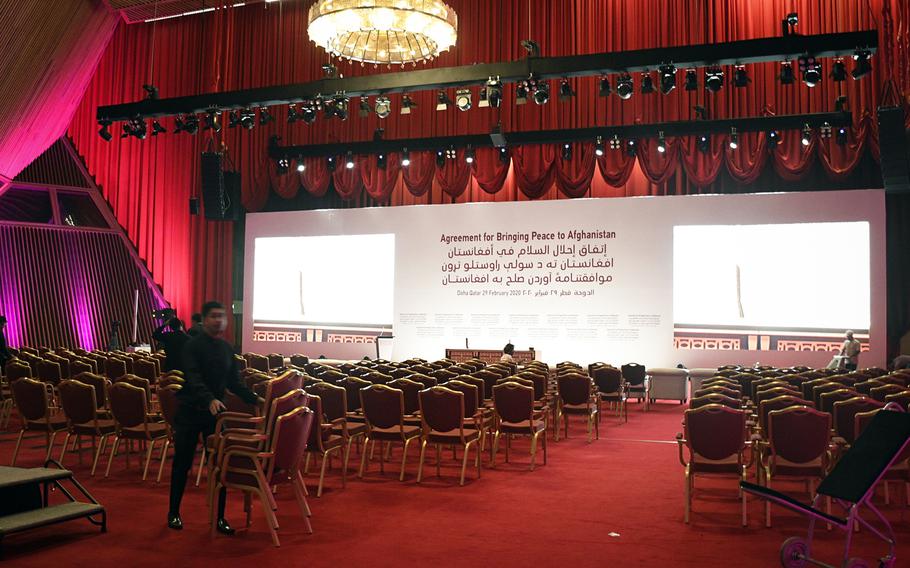 Buy Photo
Workers at a luxury hotel in Doha, Qatar, set the stage on Friday, Feb. 28, 2020 for the expected signing of a peace agreement Saturday between the U.S. and the Taliban. (J.P. Lawrence/Stars and Stripes)

DOHA, Qatar — The stage was set Friday for hundreds of guests to witness an accord expected to lay the groundwork for a U.S. troop withdrawal from Afghanistan after more than 18 years of war.

Workers at the posh Sheraton Grand Doha hotel Friday lined up dozens of chairs and tested a projection screen that serves as the backdrop where U.S. and Taliban officials will gather for a deal that would begin a conditions-based drawdown of American, NATO and foreign partner troops.

Most of the roughly 12,000 U.S. troops and 8,500 other foreign troops in the country support a NATO training and advising mission. The U.S. is expected to reduce its contingent to 8,600 to continue fighting terrorism.

In return, the militant group is expected to break ties with terrorist organizations like al-Qaida, which it had harbored in the early 2000s and refused to give up after the 9/11 attacks, prompting the U.S.-led invasion.

The agreement would also usher in talks involving the insurgent group, the U.S.-backed Kabul government and other Afghans to address how Taliban fighters would integrate into the government and military.

“It is probably the most important event in the history of Afghanistan over the last 18 years, in terms of giving the greatest potential in ending the war,” said Sultan Barakat, director of the Doha-based Center for Conflict and Humanitarian Studies, who is expected to attend the signing.

However, peace with the Taliban comes with mixed reactions from many in Afghanistan, who want an end to war but fear that gains for women and basic freedoms, particularly in the cities, might be lost as a group that once banned music and shaving gains legitimacy.

The Taliban has long refused to negotiate with the government in Kabul and a spokesman for the militant group Friday denied they would meet with their representatives in Doha. Nevertheless, a government delegation will try to speak with them, Javed Faisal, a spokesman for the Afghan National Security Council, said by phone from Kabul.

Others expected to attend the signing of the accord include former Taliban captive Timothy Weeks, an Australian university professor who arrived in Doha on Thursday. Weeks, who was held for three years, said on Twitter that he will be an “official guest” at the signing ceremony.

The Taliban posted a picture of Weeks with Anas Haqqani, one of three high-ranking militants released from Afghan custody last year as part of a prisoner swap that freed Weeks and another professor, U.S. citizen Kevin King.

The expected signing comes at the end of a seven-day partial cease-fire between the insurgents and government forces, which stopped most offensive operations in Afghanistan.

During the weeklong period, meant to test the Taliban’s ability to halt its fighters, U.S. counterterrorism operations against the Islamic State continued.

While scattered attacks broke the week’s calm, Gen. Scott Miller, the top U.S. commander in the country, said Tuesday there was a “downward trend in violence.”

The city, long one of the safest in the country, has seen increased suicide bombings and other attacks following the withdrawal of most foreign combat forces at the end of 2014.