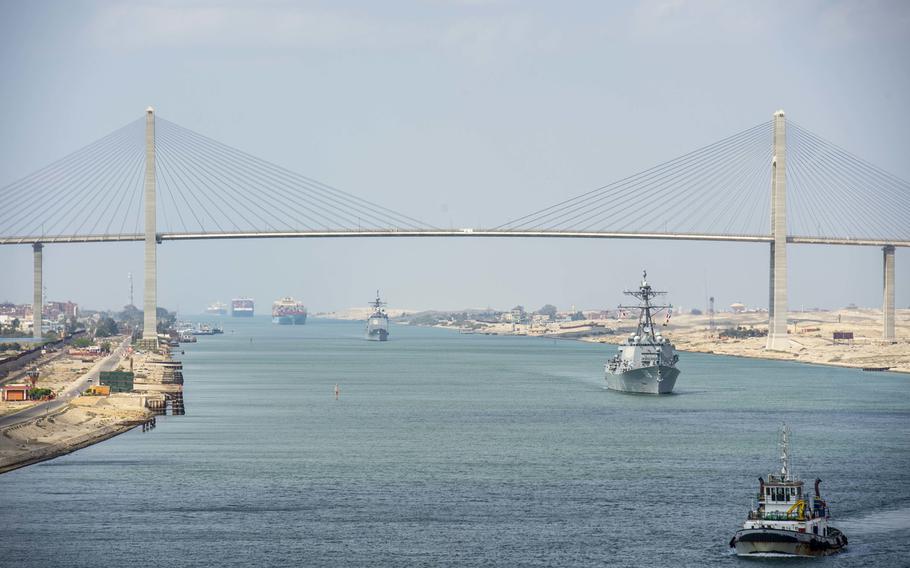 The USS Dwight D. Eisenhower Carrier Strike Group has sailed through the Suez Canal from the Mediterranean Sea, making them the first U.S. warships to pass through the maritime chokepoint since a nearly weeklong blockage of the waterway.

The aircraft carrier, the cruiser USS Monterey and the destroyers USS Mitscher and USS Thomas Hudner entered the Red Sea on Friday, the Navy’s 5th Fleet said in a statement over the weekend.

“We appreciate the government of Egypt and Suez Canal Authority’s efforts to ensure the safety of navigation in this critical waterway for all ships, and in allowing the IKE CSG to transit so quickly,” 5th Fleet commander Vice Adm. Samuel Paparo said.

The canal had been blocked to all traffic for six days starting March 23, when the container ship Ever Given ran aground in the middle of the waterway. During the blockage, more than 400 ships were stranded at the canal, which links the Mediterranean to the Red Sea.

The cruiser USS Philippine Sea was the first Navy ship to make a northbound trip through the canal Saturday, 5th Fleet said Monday on Twitter.

While sailing in the eastern Mediterranean last week, the Eisenhower strike group had already started flight operations to support the anti-Islamic State campaign in Iraq and Syria. Known as Operation Inherent Resolve, the coalition carried out more strikes against ISIS in Iraq last month than it had in all of 2020.

The Eisenhower is expected to continue support to Inherent Resolve while operating and training alongside regional and coalition partners, the Navy said.

“Our strike group is excited to sail and fly in the conduct of our operations in the Red Sea,” said Rear Adm. Scott F. Robertson, the strike group’s commander.

U.S. officials have declined to discuss the effect of the canal blockage on operations in the region, but Pentagon spokesman and retired Rear Adm. John Kirby told reporters last week in Washington that the U.S. military has “any number of alternate ways” to fulfill its missions in the region.

Kirby credited local authorities for “amazing work” to free the 200,000-ton Ever Given from the canal bank.

The reopening “will certainly facilitate greater movement,” he said, but added that the U.S. has long factored the possibility of chokepoint blockages into its planning.

While the blockage did bog down ship traffic, it wasn’t expected to cause significant delays to replenishment and logistics support, officials with both the Defense Logistics Agency and the Navy said.

As the Eisenhower entered the region, the 15th Marine Expeditionary Group, embarked on the Makin Island Amphibious Ready Group, announced Saturday the end of its support to the anti-ISIS coalition from the Indian Ocean. The Makin Island ARG had been in the 5th Fleet area of operations since January.