US gets Turkey's approval for manned flights 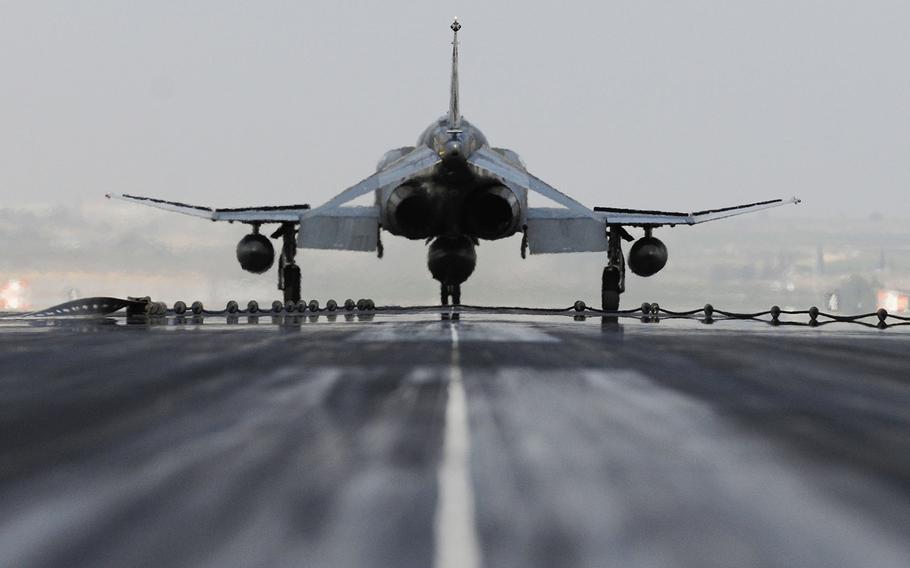 A Turkish air force F-4 Phantom waits at the end of the runway after catching the barrier on a BAK-12 aircraft arresting system during an annual test Feb. 24, 2014, Incirlik Air Base, Turkey. (Nicole Sikorski/U.S. Air Force)

WASHINGTON — The Turkish government has green-lighted the U.S. to fly manned aircraft out of airbases made available for attacks against the Islamic State group, and American fighter jets could be flying missions within days, a Pentagon spokesman said Thursday.

Meanwhile, Defense Department officials announced they were restricting U.S. military personnel, DOD civilians and dependents from traveling to a swath of southern Turkey that borders Syria. The area encompasses Incirlik Air Base, where the U.S. began flying armed, unmanned aerial systems from over the weekend.

The U.S. conducted its first drone strike against the Islamic State out of the installation on Tuesday, the Pentagon said.

The remotely piloted aircraft were already in place at the Turkish base, allowing the U.S. to quickly begin flying armed missions out of Incirlik once the agreement to broaden U.S.-Turkish cooperation in the fight against the Islamic State was finalized last month. The Islamic State group has strongholds along Turkey’s border with Syria.

The ability to fly out of Incirlik — and perhaps other unnamed Turkish air bases — increases the U.S.’s ability “to effectively and efficiently get more aircraft over targets in a timely fashion,” Davis said.

Turkey had been reluctant to allow U.S. forces to use the base for operations against the militant group’s targets. But the NATO ally has come under increasing pressure to be more aggressive in fighting the Islamic State. A deadly suicide bombing in Turkey last month was blamed on Islamic State militants. Soon after, Turkey also began conducting attacks against Islamic State targets in Syria.

The restrictions on travel to Turkey apply to an area of along Syria’s border that stretches from Adana, where Incirlik is located, east to Van and south to Ganziantep. U.S. troops have been deployed at Gaziantep with Patriot missiles since 2013 at the request of Turkey following cross-border shelling from Syria.

“EUCOM directed these restrictions based on current conditions in Turkey, and will likewise base any future decisions on conditions in Turkey at the time,” EUCOM spokesman David Westover said in a statement. “This action is in response to recent developments in the security environment. Turkey is a long-standing NATO ally and we will continue to work together to protect our men and women.”

U.S. European Command said travel to the restricted area will require approval from a general or flag officer for all servicemembers, civilian employees and sponsored dependents.

It is unclear what impact this has on U.S. airmen with the 39th Air Base Wing at Incirlik. When asked whether airmen were forbidden from leaving the base, a wing spokeswoman declined to answer because of operational security concerns.

“We are dedicated to making every possible effort to ensure the safety and security of our servicemembers, civilians, their families, and our facilities,” the spokeswoman said in an email. “We encourage all personnel to remain vigilant and to report anything suspicious to the proper authorities.”

“I can assure you that TDYs will not be curtailed,” Crane said.