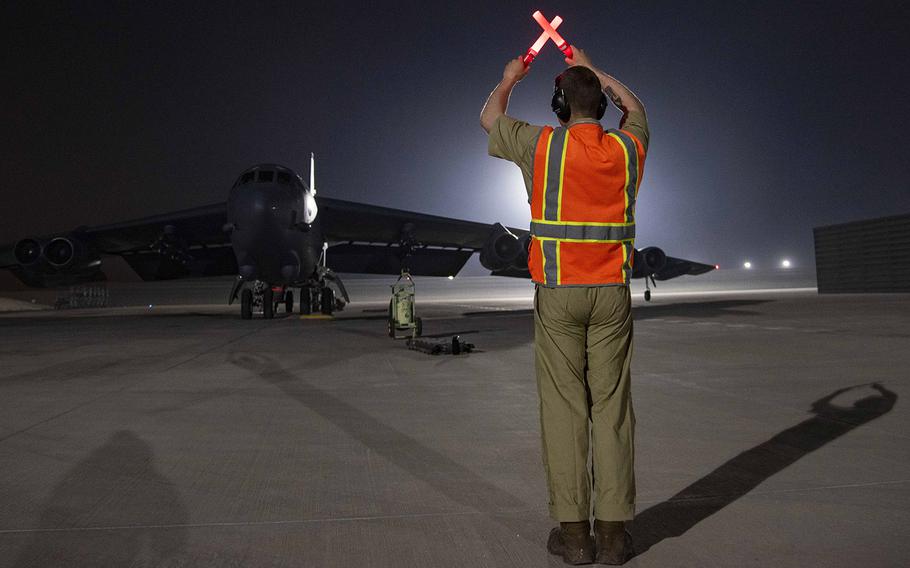 A B-52H Stratofortress assigned to the 5th Bomb Wing, Minot Air Force Base, N.D., arrives at Al Udeid Air Base, Qatar, on April 26, 2021. Two B-52 aircraft arrived April 26, joining the additional B-52 bombers that arrived April 23. The bombers are deployed to protect U.S. and coalition forces as they conduct drawdown operations from Afghanistan. (Kylee Gardner/U.S. Air Force)

WASHINGTON — The commander of American forces in Afghanistan said some “local actions” related to the drawdown have already begun, though the U.S. withdrawal from the country is not set to begin formally until Saturday

“All of our forces are now preparing to retrograde,” Army Gen. Scott Miller said Sunday during a news briefing in Kabul.

Part of the transition includes handing over military equipment and bases to Afghan forces, he said.

“There's certain equipment that we must take back to our countries – that's a requirement,” Miller said, according to a transcript of the briefing. “But wherever possible, if we do not have to, we're looking to ensure that the Afghan security forces have the bases, pieces of equipment (and) parts that are necessary for the functioning of the military.”

Miller said he aims to leave Afghan security forces “in the best possible security posture” while ensuring the safety of foreign troops as they exit.

“We have the military means and capability to fully protect our force during retrograde as well as support the Afghan security forces,” the general said.

“It would be foolhardy and imprudent not to assume that there could be resistance and opposition to the drawdown by the Taliban,” he said.

On Monday, Kirby told reporters at the Pentagon that further resources – including troops – could be deployed to the region to assist.

“It is perfectly logical that we may see additional logistics personnel and engineering support to help with the physical movement of assets and people out of Afghanistan,” he said.

CNN on Monday reported – citing unnamed defense officials – the U.S. is sending 650 additional troops to assist with the drawdown. Kirby declined to confirm the report.

The drawdown will mean the only U.S. forces stationed in Afghanistan will be those needed to protect the American embassy there. There are now more than 10,000 U.S. and coalition troops in Afghanistan, about 2,500 of whom are American.

Miller said Sunday that a “return to violence” by the Taliban would be “senseless and tragic.”