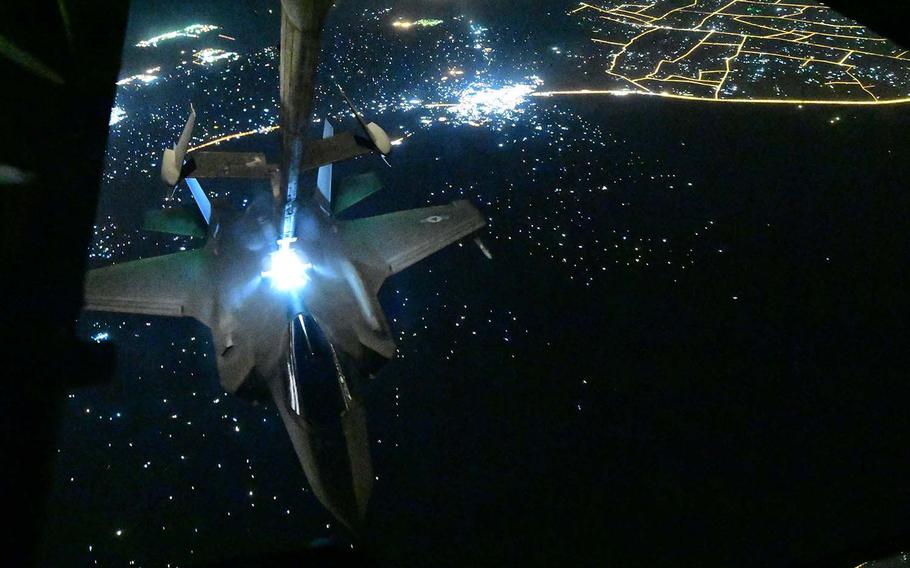 A U.S. Air Force F-35A Lightning II aircraft, assigned to the 4th Expeditionary Fighter Squadron, is guided from the hangar Sept. 10, 2019, at Al Dhafra Air Base, United Arab Emirates. F-15s and F-35s dropped 80,000 pounds of bombs on an island in the Tigris River in Iraq. (U.S. Army) Coalition and Iraqi forces carried out airstrikes Tuesday against an island south of Mosul in the Tigris River believed to be a safe haven for the Islamic State group in Iraq.

Fireballs exploded across Qanus Island in Iraq’s Salahuddin province, as plumes of smoke billowed up into the sky, a video posted on Twitter showed. Black-clad Iraqi counter-terrorism troops are seen watching over the operation from the ground.

Following the early morning strikes, ground clearance operations conducted by the Iraqi special forces were underway on the island, the U.S.-led coalition said in a statement in the afternoon.

The fighter jets dropped about 80,000 pounds of bombs, he said.

The operation “demonstrates our continued partnership to enable [Iraqi security forces] keep its boot on the forehead of ISIS,” Caggins said.

It was aimed at destroying a major transit hub for ISIS members moving from Syria and the Jazeera desert into the Mosul, Makhmour and the Kirkuk regions.

The island lies near Qayara West Airfield, known as Q West or Forward Operating Base Endurance, which was home to U.S. forces during the Iraq War of 2003-2011. It had been seized by ISIS in 2014 after the Americans left.

The base was recaptured by U.S.-backed forces and used as a staging ground as part of the nine-month battle to retake Mosul from the terrorist group that began in late 2016.

While ISIS was routed from the last of the territory it held in Iraq in late 2017 and ousted from its last bastion in Syria early this year, the group has continued to carry out targeted killings and arson of crops in both countries. Officials have warned that the group is seeking to regain its capabilities and remains a threat as an insurgent movement in both countries.

“ISIS remains a threat in Iraq and Syria,” the Pentagon’s lead inspector general for the U.S. operation in the region said in a report last month.

Tuesday’s strikes were meant to disrupt the hardline Islamist group’s ability to hide in the thick vegetation on the island, the coalition statement said.

“We’re setting the conditions for our partner forces to continue bringing stability to the region,” Hill said.