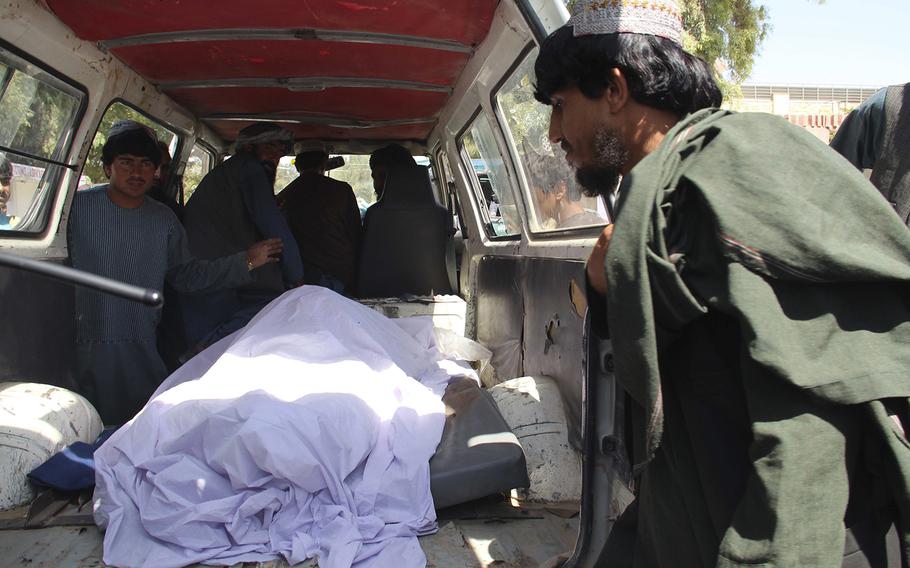 Afghans transport the body of a woman who was killed during a raid conducted by Afghan special forces, in the southern Helmand province, Monday, Sept. 23, 2019. (Abdul Hadi/AP)

KABUL, Afghanistan — The U.S.-led coalition in Afghanistan said Monday al-Qaida is to blame for most of the deaths during a night of heavy fighting and airstrikes that reportedly killed dozens of civilians in the country’s south.

Local officials had initially blamed the raid carried out by U.S. and Afghan forces in Helmand province Sunday night for the deaths of 40 civilians, including women and children attending a wedding ceremony.

“We assess the majority of those killed in the fighting died from al-Qaida weapons or in the explosion of the terrorists’ explosives caches or suicide vests,” Lt. Col. Josh Jacques, a spokesman for U.S. Forces-Afghanistan, said via email. “The incident is under investigation with our Afghan partners.”

At least 12 people at the wedding party in Musa Qala district were also wounded, provincial council member Abdul Majid Akhundzada told Stars and Stripes. Precise casualty figures are difficult to come by as the area has long been under Taliban control.

U.S. and Afghan forces carried out the operation in the district in Helmand to neutralize a group of al-Qaida fighters who “presented an imminent threat,” Jacques said.

“In the course of the operation, several foreigners associated with al Qaeda were detained, including multiple persons from Pakistan and one from Bangladesh,” he said. “Because of heavy fighting, we did conduct targeted precision strikes against barricaded terrorists firing on Afghan and U.S. forces.”

Militants hid in people’s houses during the raid, said provincial police spokesman Mohammad Zaman Hamdard. Only three women were among the dead, and three children were wounded, he said.

Two explosions ripped through the area during the incident, Hamdard said, adding that they may have been caused by bombs kept by militants.

The operations led to the deaths of 22 Taliban members and the arrest of 14 others, including five Pakistani nationals and the one Bangladeshi, said an Afghan Defense Ministry statement.

“The foreign terrorist group was actively engaged in organizing terrorist attacks,” said the statement, adding that a large warehouse of the terrorists’ supplies and equipment was also destroyed in the raid.

The raid comes a week after Afghan officials blamed the U.S. for killing at least 16 and wounded many others, mostly civilians, in a drone strike in eastern Nangarhar province. The strike was targeting Islamic State militants, the U.S. said.

U.S. officials have promised greater battlefield pressure on Taliban militants following a break-down in peace talks between the U.S. and the insurgent group, which harbored al-Qaida after the 9/11 attacks 18 years ago and has so far refused to renounce the terrorist organization founded by Osama bin Laden.

In a separate incident Monday, an Afghan police officer was killed by international forces after he opened fire on their convoy in neighboring Kandahar province, NATO’s Resolute Support mission said. Servicemembers in the convoy, whose nationalities were not provided, suffered “non-life threatening” injuries, the coalition said.

“We are reviewing the incident with our Afghan security partners,” Resolute Support said in a statement. The review could result in changes to force protection measures, the statement said.

Stars and Stripes reporter Chad Garland and Zubair Babakarkhail contributed to this report.