US, Australian professors to be freed in swap for Taliban leaders, Afghan president says 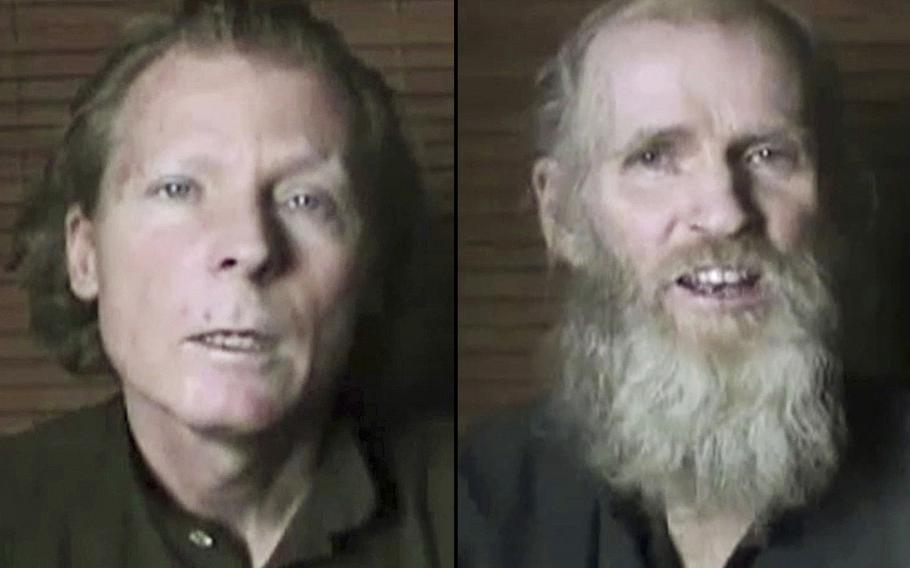 KABUL, Afghanistan — Two university professors who were kidnapped in Kabul three years ago — one from the U.S. and the other from Australia — are set to be freed in exchange for high-ranking Taliban leaders, Afghan President Ashraf Ghani said Tuesday.

The three Taliban, who are being held in a prison near Bagram Airfield, will be released if the militant group frees Kevin King, 63, of the U.S., and Timothy Weeks, 50, of Australia, Ghani said in a live television broadcast. King and Weeks were abducted from the American University of Afghanistan in 2016.

The Taliban leaders who Ghani said would be freed in the prisoner exchange are Anas Haqqani, the younger brother of the head of the Taliban-affiliated Haqqani network, which the U.S. has designated as a terrorist group; Hafiz Rashid, a military strategist whose brother is a member of the Taliban’s political committee in Qatar; and Haji Mali Khan, said to be the uncle of the Haqqani network’s leader.

The three Taliban leaders will be “sent to Qatar under U.S. supervision,” Radio Free Europe – Afghanistan cited an unnamed Afghan official as saying.

No date has been set for the prisoner swap. Ghani said the exchange is “a humanitarian gesture,” due to the deteriorating health of the two academics. King, in his early 60s, has been “seriously ill” and the Taliban are worried he could die in their custody, Agence France-Presse cited an unnamed Taliban source as saying Tuesday. King has had heart and kidney problems since at least 2017, Taliban videos and statements released that year showed.

The American University of Afghanistan welcomed news of “the possible release” of King and Weeks in a statement posted on its website.

“While AUAF is not part of these discussions, we continue to urge the immediate and safe return of our faculty members who have been held in captivity, away from their friends and families, for more than three years,” the statement said.

The prisoner exchange could pave the way for “direct and face-to-face peace talks with the Taliban,” Ghani said.

The militant group has long refused to include the government in Kabul in peace negotiations. The U.S. and the Taliban engaged in months of peace talks earlier this year, but President Donald Trump declared the talks dead in September, after a Taliban-claimed attack that killed a U.S. soldier.