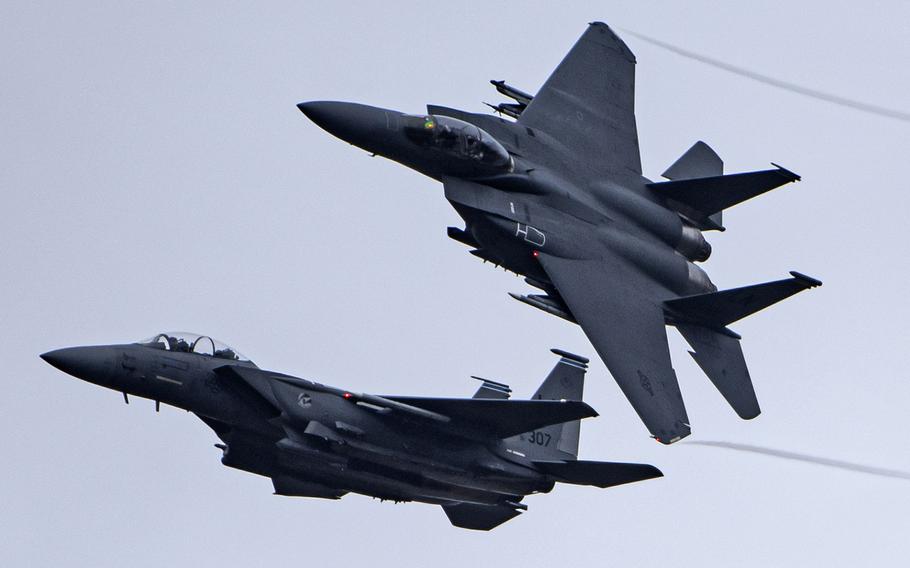 WASHINGTON — The airstrike on facilities in Syria used by Iranian-backed militias was to prevent future attacks on Americans and allies in Iraq, the Pentagon’s chief spokesman said Friday.

“Our desire was to remove it from their inventory. And to send a strong message about future attacks. Clearly, we want there to be a deterrence message here, delivered straight to them about the repercussions of going after our people and our Iraqi partners and our facilities inside Iraq,” John Kirby told reporters at the Pentagon.

Thursday night’s strike targeted a border control point in Abu Kamal, Syria, manned by Iranian-back militia groups that include Kait’ib Hezbollah and Kait’ib Sayyid al-Shuhada, which U.S. officials believe were behind recent attacks against American and Iraqi forces, Kirby said. The operation involved two F-15E Strike Eagle fighter jets that dropped seven precision-guided munitions on 11 facilities in the compound, nine of which were totally destroyed and two that were functionally destroyed, he said.

The compound was being used to house, train, and move people and weapons into Iraq in order to conduct attacks, Kirby said.

“As we made clear last night, and I think through President [Joe] Biden's order he made clear that the United States will act to protect American and coalition personnel and our security interests in the region,” Kirby said.

The strike comes after several attacks on and near American compounds in Iraq, including the Feb. 15 strike in Irbil that killed a civilian contractor working with the U.S.-led military coalition. Six others were wounded, including a U.S. service member. Other rockets landed in a residential area of the city.

Due to an ongoing assessment of the damage from the strike, Kirby would only say preliminary reports show some causalities at the site, but he would not offer information on how many. He also would not say what was located in the destroyed facilities such as weapons.

Before the strike, congressional leaders were informed as were Russian military officials whose forces also operate in Syria, Kirby said. He also said the legal authority for Biden to order the strike fell under Article II of the Constitution and the United Nations’ charter article 51 regarding a nation’s right to self-defense.

Leaders of the House and Senate Armed Services Committees approved the actions taken by Biden and Defense Secretary Llyod Austin to deter the Iranian-backed militias and protect Americans serving abroad.

“Yesterday’s strikes were the correct, proportionate response to protect American lives, and I look forward to more information on the administration’s response to Iran’s aggression,” said Sen. Jim Inhofe of Oklahoma, the ranking Republican of the Senate committee.

Rep. Adam Smith, D-Wash., the chairman of the House committee, said the strike was a reminder that the U.S. will protect itself and its allies.

“While the military strike was necessary to protect our personnel in the region and deter further attacks, I have spoken with the Biden administration's national security team and they are committed to using diplomacy and engagement with Iran, and also working with our allies and partners in the region to deescalate tensions going forward,” he said.