US advisers advance on Mosul with Iraqi units 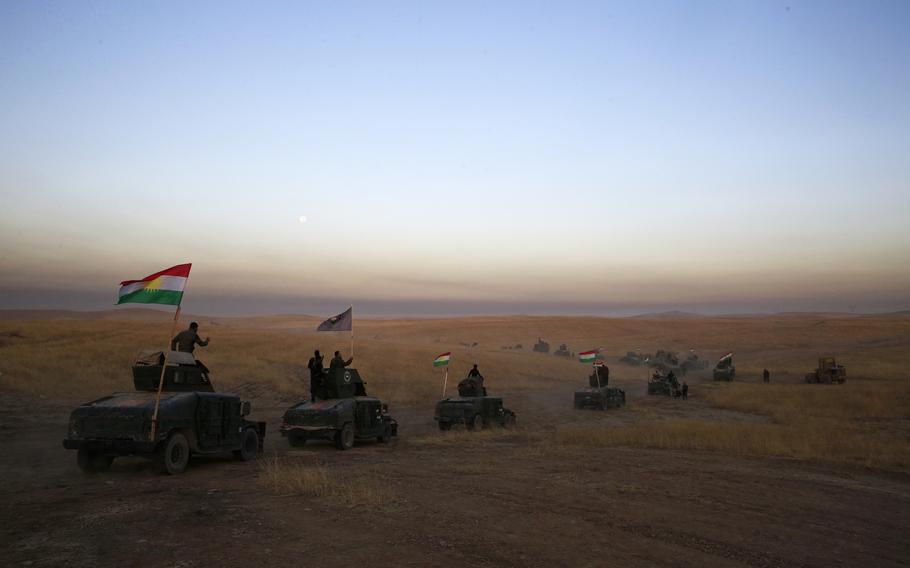 A Peshmerga convoy drives towards a frontline in Khazer, about 30 kilometers (19 miles) east of Mosul, Iraq, Monday, Oct. 17, 2016. The Iraqi military and the country's Kurdish forces say they launched operations to the south and east of militant-held Mosul early Monday morning. (Bram Janssen/AP)

Advisers, typically Army special forces, are paired with Kurdish forces and units of the Iraqi Counter Terrorism Service that they trained with in preparation for the assault on Mosul, a city of an estimated 1 million Iraqis that the Islamic State group has controlled since summer 2014.

On Monday, Iraqi forces launched the long-anticipated battle to retake Mosul, the last Islamic State group stronghold in the country. Approximately 10,000 Kurdish forces are approaching Mosul from the east and another 18,000 Iraqi security forces are moving toward the city from the south, said Navy Capt. Jeff Davis, a Pentagon spokesman.

“We’ve been [inserted in smaller-sized tactical units] with them to begin with,” he said.

On Monday, Pentagon Press Secretary Peter Cook said: “I think it’s fair to say that there are Americans … on the outskirts of the city.”

Two defense officials who spoke on the condition anonymity said Monday that the number of U.S. advisers is between 100 and 200 troops.

On Tuesday, Davis said the number is “over 100, but the numbers could go higher.”

There are about 4,880 U.S. forces in Iraq, many of whom are involved in support roles to assist in the battle for Mosul, including air support, artillery, intelligence support and forward air controllers, Lt. Gen. Stephen Townsend, commander of Combined Joint Task Force Operation Inherent Resolve, said Monday in a statement.

“We’re going to leave it to the Iraqis to determine the movement of their forces and we’ll be there in a support role,” Cook said. “It is too soon to say at this point where these movements will go, what the Americans will do in that advisory capacity. But what is important is that it will be Iraqis in the lead, it will not be Americans.”

Cook said the U.S. forces would remain behind the forward line of troops, but would be at risk.