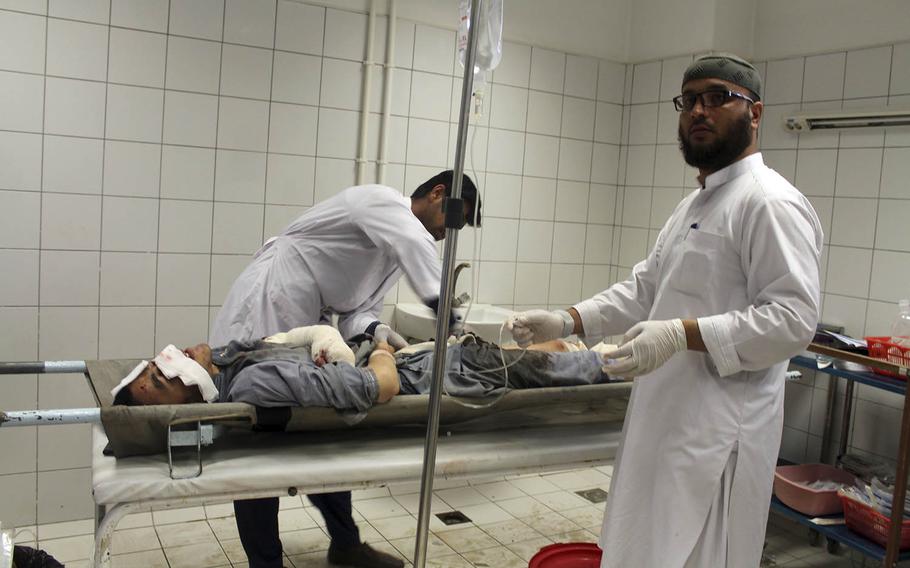 An Afghan man is treated at a hospital following an airstrike in Dashti Archi district of Kunduz province northern Afghanistan on May 2, 2018. (AP)

The U.N. said in a report that the children were among 36 people killed and 71 wounded in the April 2 attack in the Dashti Archi district of the northern province. It said the casualty toll may have been even higher.

Afghan defense officials initially said the attack targeted about 30 Taliban leaders who were taking part in a military parade. They said the strike was on a Taliban training camp, with foreign fighters from across the border in Tajikistan and Uzbekistan among the dead.

The U.N. launched its probe after an outcry from locals who said the gathering was largely a civilian one. A local official said the air raid hit a graduation ceremony at a religious school, and that the dead included both civilians and militants.

The U.N. said in its report it was unable to confirm that all casualties were civilians, or that Taliban leaders were present. In a statement, the world body said the key finding was that the government fired “rockets and heavy machine gun fire on and around a religious gathering, killing and injuring civilians, the majority of whom were children.”

The findings were based on more than 90 interviews with victims, witnesses, government officials and medical personnel, as well as three large community meetings in the provincial capital and a fact-finding mission to the site.

A spokesman for the Afghan Defense Ministry declined to comment on the findings.

The U.S. military was not involved in the strike, officials have said. But the U.S.-led coalition has been building up the government’s air force, and officials have touted it as a success of the NATO train-advise-assist mission.

NATO trainers have said that Afghan pilots have shown judgment and restraint in their use of weapons, calling off strikes when civilian casualties seemed likely.