This frame grab from video shows a damaged restaurant where an explosion occurred, in Manbij, Syria, Wednesday, Jan. 16, 2019. (ANHA via AP)

This frame grab from video shows a damaged restaurant where an explosion occurred, in Manbij, Syria, Wednesday, Jan. 16, 2019. (ANHA via AP) 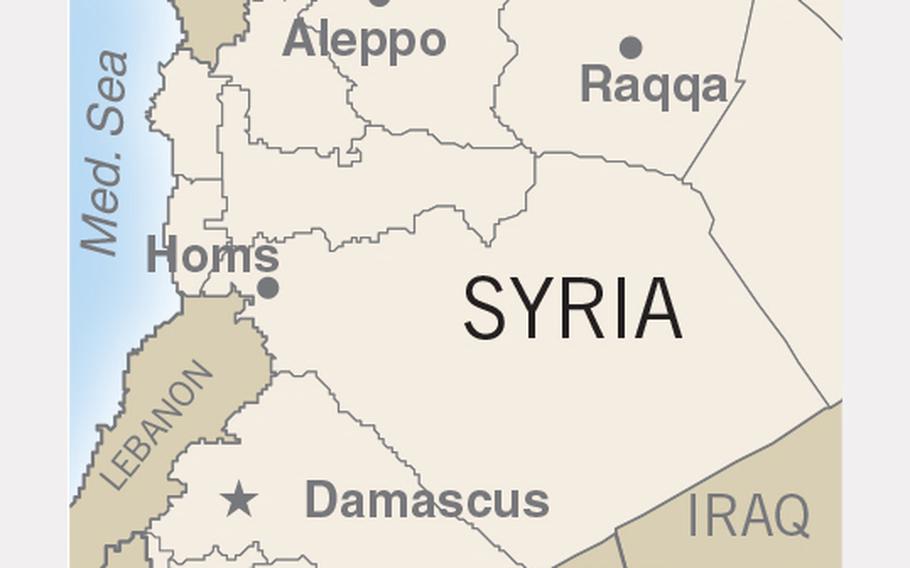 Three additional American servicemembers were injured in the explosion that U.S. Central Command announced in a statement hours after officials acknowledged American troops were among the people killed in the attack. The explosion occurred as U.S. military officials met with local leaders in the town just west of the Euphrates River and about 20 miles south of the Turkish border. The other Americans killed included a Department of Defense civilian and a contractor supporting the department, according to CENTCOM.

The Pentagon was withholding the names of the people killed in the bombing until 24 hours after their families had been notified, which is the Defense Department policy. Officials said the incident was under investigation and they could not immediately confirm ISIS was responsible for the attack.

The troops were among more than a dozen casualties reported by Syrian and Kurdish outlets Wednesday afternoon, but Stars and Stripes could not independently confirm the death toll.

At the Pentagon, unofficial accounts of the number of deaths among American troops changed throughout the day as officials in Syria investigated the attack.

Some 2,000 U.S. troops are deployed to the country to fight ISIS. The attack comes as the U.S. has begun the process of withdrawing its troops from the country, which President Donald Trump ordered last month, surprising U.S. officials and allies and prompting Defense Secretary Jim Mattis to resign. To date, only equipment has been removed from Syria, defense officials said. They would not speculate what impact the deadly attack Wednesday could have on the withdrawal.

Trump had been “fully briefed” on the Manbij attack and officials would continue to monitor the situation, the White House said in a statement.

ISIS said via its Amaq news agency that the attack was carried out by one of its members wearing an explosives-laden vest.

The blast occurred near a restaurant where coalition forces were said to be meeting with members of the Kurdish-led Manbij Military Council, which has controlled the town since U.S.-backed Syrian Democratic Forces, or SDF, took it from ISIS in 2016.

The council’s spokesman, Shervan Derwish, confirmed the blast on Twitter.

The city is located near Syrian government forces backed by Russia and anti-regime fighters backed by Turkey.

Footage shared by BBC producer Riam Dalati showed a helicopter taking off from a soccer field near the site after the blast. It’s unclear whether it was a U.S.-operated helicopter, as Dalati claimed on Twitter, or one operated by an ally.

The Britain-based Syrian Observatory for Human Rights, which uses a network of on-the-ground sources, reported helicopters had transported one dead coalition servicemember and one who was seriously wounded east toward Iraq. At least five members of the local militia and nine civilians also were killed, the observatory said, and 10 more were wounded, with the toll expected to rise.

Video taken by a security camera near the blast and shared widely on Twitter shows a crowd of people gathered when a ball of flame erupts, knocking down bystanders. A child then runs out from the smoke.

A local man who had eaten regularly at the restaurant confirmed to that the video was taken in Manbij, said Elizabeth Tsurkov, a research fellow specializing in Syria at the Forum for Regional Thinking, an Israeli think tank.

“The owner of [the] bombed restaurant fled ISIS [and] opened a restaurant in Gaziantep, [Turkey],” she said, citing her local source. The man had returned to Manbij after it was captured by the SDF.

A post-blast video also shared on social media shows windows blown out and a section of wall covered in what appeared to be blood.

U.S. troops deployed to the country are training and advising local partner forces battling ISIS. During the past four years, U.S.-backed forces have helped oust the terrorist group from nearly all of the territory it once held in the two countries and are now helping fight the group in its last refuge along the Syria-Iraq border.

Wednesday’s attack comes days after the U.S. said it had begun the process of withdrawing troops from Syria by initially removing equipment no longer needed for ongoing operations. Trump initially appeared to want to withdraw from Syria rapidly, but has said since the withdrawal will be carried out more gradually.

Critics had complained about the timing of the withdrawal and that it amounted to abandonment of the U.S.’s Kurdish partners — who have suffered thousands of casualties battling extremists — because Turkey views the Kurds as terrorists and has vowed to attack them.

On Capitol Hill in the wake of the attack, Sen. Lindsey Graham, R-S.C., who said he might have eaten in the restaurant on a visit to the region, expressed concern about Trump’s statements last month calling for the withdrawal.

The Americans who died in the bombing were protecting America and had helped make it possible for the locals in Syria to gather together peacefully, Graham said.

“They’ve had enough of killing,” he added.

Sen. Bob Menendez, D-N.J., issued a statement expressing his sympathies for the families of the slain U.S. servicemembers and calling on the Trump administration to have a “clearly developed and articulated strategy to secure the gains we have made in the fight against terror.”

Hours after the attack, Vice President Mike Pence told U.S. diplomats during a speech that the ISIS caliphate “has crumbled and ISIS has been defeated.”

At the Pentagon, acting Defense Secretary Patrick Shanahan, who was promoted on an interim basis by Trump from the Pentagon’s No. 2 position following Mattis’ resignation, offered “thoughts and prayers” to the family members and comrades of the people killed and wounded Wednesday, in a brief statement to reporters in the afternoon. He declined to answer questions about the attack or the U.S. military’s future in Syria.

“Our fight against terrorism is ongoing and we will remain vigilant and committed to its destruction,” Shanahan said.